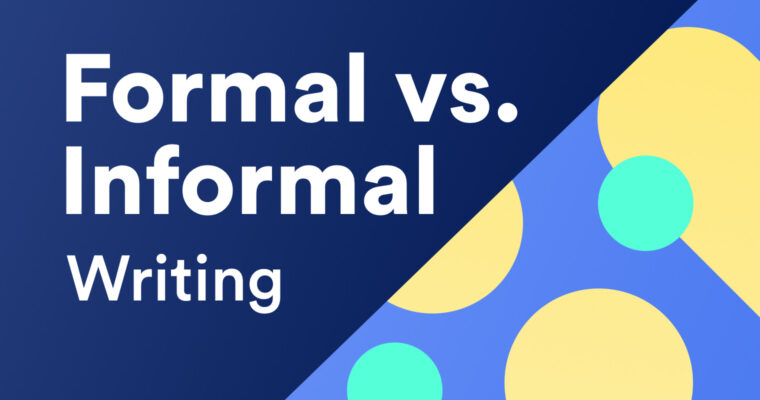 A key part of clear communication is considering your audience. How well you know them, and how casual it’s appropriate to be with them, will affect every word from your salutation to your sign-off, so let’s unpack the difference between formal and informal language.

Deciding how formal your writing needs to be is a bit like choosing an outfit. You need to know whether you’re headed to a backyard barbecue or a red carpet gala. A poor choice will make you stick out, and not in a pleasing way. We’ll start with some definitions and examples of formal vs. informal writing style, then elaborate on where each can serve you best.

Here’s a tip: Want to make sure your
writing shines? Grammarly can check your spelling and save you from grammar and punctuation mistakes. It even proofreads your text, so your work is extra polished wherever you write.

Informal language is how you communicate with people you know well and can relax around. It tends to resemble the way people converse out loud more than formal writing does, and it may feature more contractions (“they’re” instead of “they are”) as well as slang, abbreviations, and expressions of emotion—even exclamations!

As an example, you might use informal language when sending a quick invitation to some friends:

Hey fam, we’re hosting a brunch thing at our place this Sunday morning say 10:30-ish. Hope you can make it! xo

That said, just because they’re your friends doesn’t mean you’ll never write to them formally. For instance, if you’re working on an invitation fancy enough to consider employing a calligrapher and the word “fête,” chances are you’ll want a more formal greeting than “hey y’all.”

You might think of formal language as the snappy blazer to informal writing’s t-shirt. It’s more serious, and features more buttoned-up construction, longer words, and little to no slang. A professional might use it to write a cover letter, business proposal, white paper, or legal brief.

Formal writing tends to use abbreviations only after first spelling out what they stand for. And where exclamations are fine in informal settings, they’re frowned upon for formal writing.

The same goes for the first and second person—notably, pronouns like “I” and “you.” Here’s an example in which the formal version writes around the word “I” by using the passive voice:

Informal: I asked the mayor about earthquake preparedness, and he said we haven’t done enough to be ready.

Formal: When asked about earthquake preparedness, Mayor Kim said the city has more work to do.

Formal language sometimes gets panned for being full of stilted, winding sentences, but there’s no rule saying it always has to be mind-meltingly bland or as opaque as a Terms of Service agreement. Examples abound of it being memorable and funny. That’s true even on the level of Supreme Court opinions, like this one by Ruth Bader Ginsburg:

Notwithstanding nightmarish images of out-of-control flatware, livestock run amok, and colliding tubas disturbing the peace and quiet of Tecumseh, the great majority of students the School District seeks to test in truth are engaged in activities that are not safety sensitive to an unusual degree.

Formal, yes, but a snoozer, that sentence ain’t.

How do I tell which style is appropriate?

Deciding when to use formal language and when it’s better to write informally goes back to the question of who your audience is.

For example, if you’re writing to a prospective client, you want to seem professional, so your writing might err on the side of formality. You don’t want your casual manner to give the impression that you wouldn’t take the work seriously, after all.

Similarly, where in professional settings you’re generally expected to keep your emotions in check, formal writing usually favors objectivity, keeping the writer’s feelings at a remove.

If you’re reaching out to someone you don’t know well and aren’t sure what level of formality to aim for, it’s often easier to start out formal. As the correspondence progresses, you might reassess and ease your style accordingly. By contrast, if you start out too casually, only to realize you’re giving the wrong impression and have to correct course, things could feel mighty awkward.

Then again, being overly formal in a context clearly better suited to informal writing can look ridiculous. Imagine organizing a weekend float trip and flexing your formidable formal stylings this way:

As a longtime aficionado of float trips, it pleases me to suggest this upcoming Saturday, the 18th, for a worry-free afternoon on the storied Inconsiderate Goose River. Please advise me as to your availability and inclination to carpool.

Dang, Todd, did you also attach a SWOT analysis of potential snacks? Dial it back—it’s okay to relax sometimes.

Need more guidance on the difference between formal and informal writing? Use Grammarly’s tone detector when you write your next email.