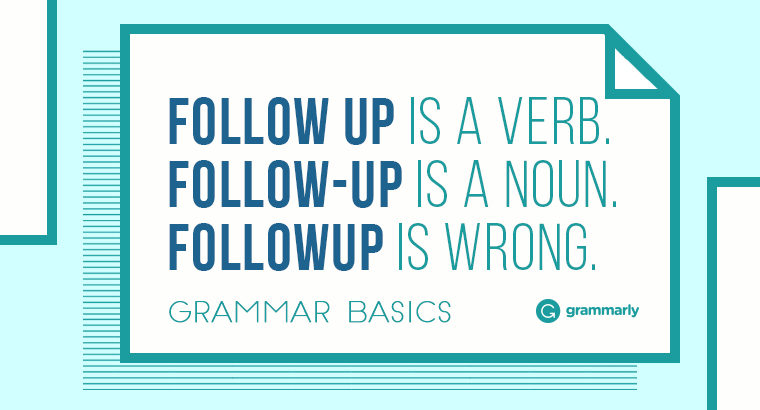 There is a space between follow and up under one condition—you are using follow up as a verb. To follow up means to gather further information or to reinforce or evaluate a previous action. Those who work in the medical field often use this phrase with patients: The doctor will call you to follow up after the surgery to see how you are recovering.

Does that mean followup and follow-up are wrong? No, because follow up functions only as a verb. But you might find yourself needing to talk about the act of following up. For example, a news reporter might present a story that gives further information or reports the conclusion of a prior report. The second piece would be a follow-up to the first. Parents might call the school to make sure that their children’s grades are improving after they hire a tutor. They may schedule a follow-up with the teacher. If you use the expression in this way, it functions as a noun. A few dictionaries, such as the American Heritage Dictionary of the English Language, list followup, written as one word, as an alternative to follow-up with a hyphen. However, others such as Merriam-Webster list only follow-up as standard.

As an adjective, follow-up means intended as a response, a reaction, an evaluation, or a reinforcement of a previous action. For instance, you may be called for a follow-up interview if you did well on your first-round interview, or you may receive a follow-up letter if you write a letter of complaint to a company. In medicine, it specifically refers to an examination to monitor previously administered treatment.

Ford took his time putting together his follow-up, the dreamy, non-linear Nocturnal Animals—but, as he pointed out to Vanity Fair senior west coast editor Krista Smith at this year’s Toronto Film Festival, he hasn’t exactly been idle.
Vanity Fair
In the follow-up study, a team of researchers led by Conny Vrieling, MD, PhD, of the Clinique des Grangettes, Switzerland, sought to reanalyze the prognostic factors related with breast cancer recurrence in a long-term follow-up of the EORCT boost no boost trial.
Breast Cancer News

What’s the right way to write the expression—followup, follow-up, or follow up? The answer is in the details. If you are using the phrase as a verb, your only option is to add a space between follow and up. If you are using the expression as a noun or an adjective, you can choose the universally accepted follow-up or take a chance on followup. In fact, you might want to follow up on followup by keeping an eye on new editions of your favorite dictionary. It just may be coming soon.