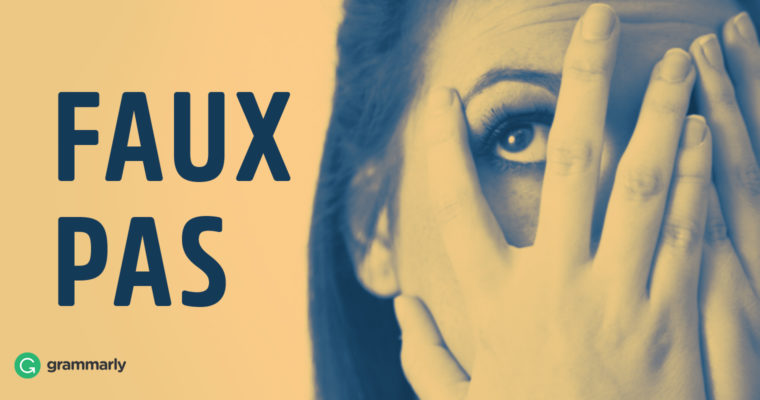 As far as writing it is concerned, you don’t have to worry about the plural of faux pas—it’s written the same as the singular. If you have to pronounce it, however, you should do it like this: [foh pahz].

There is a long and complicated history between the English and French languages, much like there’s a long and complicated history between the United Kingdom and France. But you don’t need to know a lot of history to be aware of the influence French has had on the English language—it’s possible that roughly one-third of words in the English language today came into it through French. Not to mention the fact that French was a facilitator of the Latin influence on English’s vocabulary. Some French words have been so thoroughly assimilated into English that it’s hard to think about them as anything other than English (like the word “constitution,” for example). But some are still distinctly French, even though they’ve been used in English for centuries—like faux pas.

The Origin and the Meaning of Faux Pas

Faux pas is a loan phrase from French that’s been used in English since the seventeenth century—the 1670s, to be more precise. The two words that constitute the phrase are faux, which means “false,” and pas, which means “dance step.” Over time, faux has also acquired the meaning “fake,” which is the sense we’re familiar with from the phrase faux fur. But in faux pas, it means false, and the whole phrase means “false step,” or “misstep.” Faux pas is most commonly used to denote an embarrassing mistake made in a social context. So to say that someone made a faux pas is to say that someone made a social blunder. This meaning isn’t so far removed from the original—“to make a breach of good manners,” or “to compromise one’s reputation.”

The Plural of Faux Pas: French

If you really have to make social blunders, it would be best to keep them to a minimum. But since that’s not always possible, there has to be a way to say “more than one faux pas”—it has to have a plural.

Since faux pas is a French phrase, let’s see how the French pluralize it. We know that faux pas, the singular form, is pronounced [foh pah]. The plural is written the same as the singular, faux pas, and there’s no difference in pronunciation either.

The Plural of Faux Pas: English

Every year numerous tourists fall foul of local customers failing to brush up on the cultural faux pas of the destinations they visit. —The Daily Mail

Some of the potential faux pas on the list come from countries like Canada, Greece and the US. —Express

That’s why we turned to Tim Rogers, creative director of Living Proof, to pinpoint every faux pas that could intensify frizz. —Glamour

Aside from her faux pas over the motherhood matter, relevant questions have been raised about her “embellished” CV and about her apparent flip-flops over European Union membership. —The Guardian