Despite vs. In Spite Of

What’s the difference between despite and in spite of?

The easy answer: none. Despite and in spite of, despite what you may have heard, work identically in a sentence.

In other words, these two prepositions, in spite of what you may have heard, are basically identical.

In most cases, both mean “notwithstanding,” “even though,” or “regardless of.”

Despite their similarities, keep these things in mind to make sure your usage gives no cause for complaint.

Where they go in a sentence

Both despite and in spite of are prepositions that show contrast. They can show up at the start of a sentence or in the middle, but you’ll often need an extra clause to show the flip side. For example:

As you may have guessed, the same would be true if we replaced the “in spite of” in that sentence with “despite.” What matters is that the independent clause—the one that could stand alone as a sentence—is there to balance out the dependent clause that starts with “in spite of.” 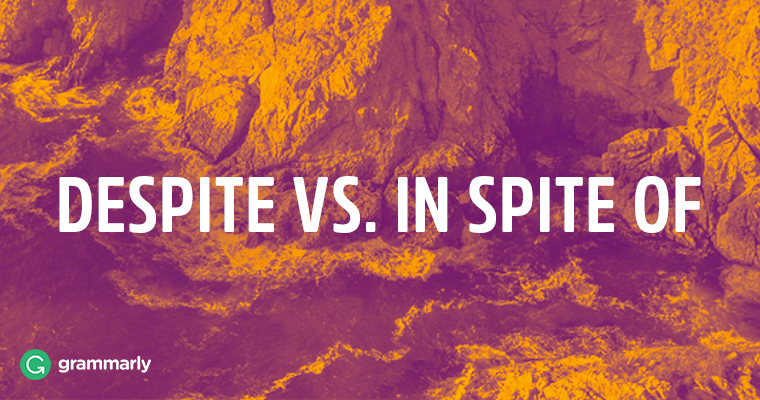 What comes after them

Not just any part of speech can be used with these two little prepositions. For the most part, you’ve got three options for what can follow your spite-related phrases.

For the next two hours the new boy’s behavior was exemplary, despite the spitballs, shot from the nib of a pen, that occasionally splattered against his face. —Gustave Flaubert, Madame Bovary

Grammatically savvy, and classy, too.

He was chubby and plump, a right jolly old elf, And I laughed when I saw him, in spite of myself! —Clement Clarke Moore, The Night Before Christmas

This take on Santa Claus (not be confused with an independent clause) demonstrates the common construction, “in spite of oneself.” This speaker means he laughed without meaning to. Sorry, Santa!

This is also an important exception: “in spite of oneself” is a fixed idiom: you wouldn’t say “despite oneself.”

A gerund is a verb masquerading as a noun. Here’s how it looks with our words of the day.

‘Now, above all, he must be convinced that he is on an equal footing with all of us, in spite of his taking money from us,’ Alyosha continued in his rapture. —Fyodor Dostoevsky, The Brothers Karamazov

“Taking” works as a noun here—same as the nouns in the examples above. That -ing is what sets it apart.

Despite ‘throwing rocks,’ Mike knew, we all knew, that mighty Terra with eleven billion people and endless resources could not be defeated by three million who had nothing… —Robert Heinlein, The Moon Is a Harsh Mistress

Phrases with what or how

When not used to start a question, what, how, and their other wh- friends function as relative pronouns when they connect phrases in a sentence, or as adverbs when they modify a verb. Here are a few now.

The shower head. It worked fine despite how it looks. —TripAdvisor comment

“The shower head” is a fragment. But at least it works (grammatically and water-wise).

In spite of what happened to it, the pounding rain and hurricane-force winds, the barn still stands intact. —Peter H. Hare and Edward H. Madden, Causing, Perceiving and Believing: An Examination of the Philosophoy of C.J. Ducasse

Where they come from

“Spite” is a noun defined as “ill will or hatred toward another, accompanied with the disposition to irritate, annoy, or thwart.” That’s a fancy way to say “holding a grudge.” “Spite” is also a verb, which means “to purposely hurt or annoy.” For example:

Don’t cut off your nose to spite your face.

In other words, don’t look for revenge out of spite if you may end up harming yourself in the process.

Contemporary usage of despite and in spite of isn’t quite so, well, spiteful. But in some cases you can still pick up a hint of contempt in the “spite” part of these prepositions:

Cory ate all of the cookies in spite of his mom’s warnings.

In Cory’s case, “in spite of” means “regardless of,” but Cory may also hold a grudge against his mom for trying to curtail his cookie-eating.

Despite the many examples, now you’ve got a solid grasp of how these words work. Just don’t use them in spite, in spite of where they come from.