What Is a Declarative Sentence? 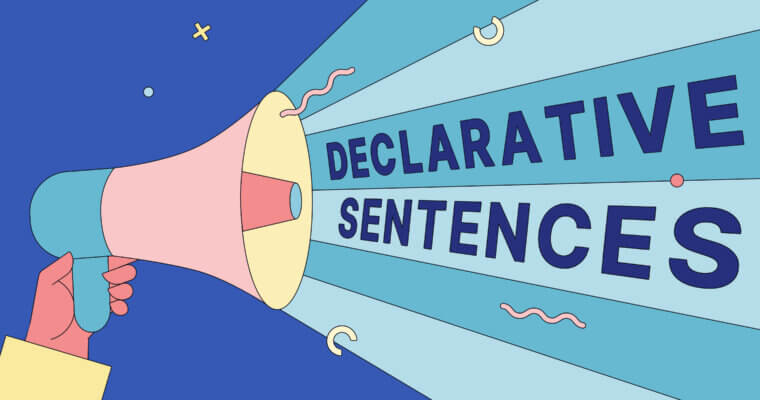 Write with confidence
Grammarly helps you communicate the way you intend

What is a declarative sentence?

Unlike other common types of sentences, declarative sentences always end in a period.

Types of declarative sentences with examples

There are four different types of declarative sentences, depending on how many clauses you have and which types they are. We provide a brief summary below, but if you’d like to learn more, check out our guide to sentence structure.

The sky looks blue, and the clouds look gray.

If I wear my glasses, the sky looks blue.

If I wear my glasses, the sky looks blue, and the clouds look gray.

The word order in declarative sentences is quite straightforward:

Ideally, the subject comes first, followed by the verb (the predicate), and after that comes the indirect object and direct object. Note that a lot of sentences don’t have objects, so sometimes you only need a subject and a predicate.

Other parts of the sentence, such as prepositional phrases and the subordinate clauses mentioned above, can be added at the beginning or the end of the sentence. You can also add transition words before the subject, a big help with connecting sentences in longer works like creative writing or research papers.

Now, let’s rephrase that example as a question, or an interrogative sentence. Notice the changes in both the word order at the beginning and the punctuation at the end.

What is the difference between declarative sentences and exclamatory sentences?

However, even though they look similar, the meaning is very different. Exclamatory sentences are more urgent, emotional, or surprising. They’re used to make certain sentences stand out as more exciting.

To illustrate what we mean, let’s take our declarative sentence example above and rewrite it as an exclamatory sentence.

The word order is identical, and the only technical difference is the punctuation at the end. However, the meaning is very different. As an exclamatory sentence, this example could mean the speaker is excited because they just discovered the difference in pronunciation, or maybe they’re frustrated because they can’t understand a Scottish soap opera.

Lastly, imperative sentences act like commands or requests. In other words, they’re used to give orders to someone, whether politely or not.

Imperative sentences typically start with the verb, but can also start with subordinate clauses or a polite modifier like “please.” They can end with either a period or an exclamation point.

When in the United Kingdom, change your pronunciation.

Examples of declarative sentences in literature

“Not all who wander are lost.”

—J. R. R. Tolkien, The Fellowship of the Ring

“There is no greater agony than bearing an untold story inside you.”

“All happy families are alike; each unhappy family is unhappy in its own way.”