A mother and daughter may sound alike on the phone, but if you meet them in real life you can usually tell who is who. The homophones cue and queue are also like that. They sound the same, but if you look at the context, you can easily tell them apart. Let’s define the two terms and see them in action!

In theatre, a cue signals when a certain line or action should begin. The word probably comes from the Latin quando, meaning “when,” which was sometimes used as a stage direction in actors’ scripts. Often, the word was abbreviated to Q. Read the letter aloud, and you will understand how “cue” originated. Outside of acting, a cue is “a hint, suggestion, or something that brings a specific memory or response to mind.” As a verb, to cue is to prompt or to provide with a cue. Cue is featured in a few interesting expressions: Cue up the tape. (Find a specified section of a recording and pause it, readying it to be played at the proper time.) Did you miss a cue? (To miss a cue is to miss the point or to fail to respond to a literal cue.) 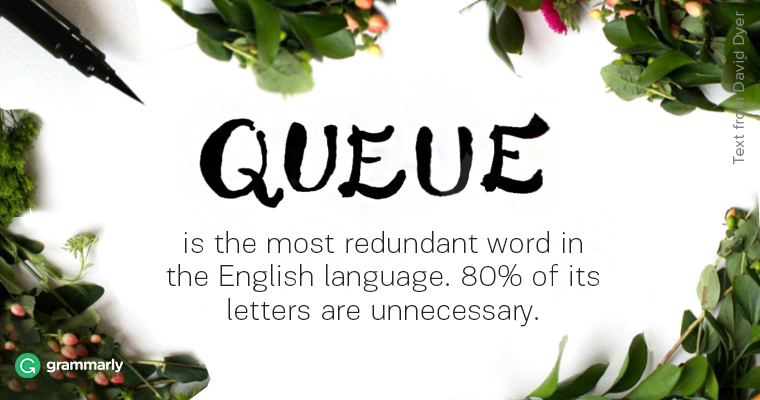 Now the curtain had been rung down forever, the footlights dimmed and the audience suddenly vanished, while the stunned old actor remained on his empty stage, waiting for his cues.” —Margaret Mitchell, Gone with the Wind

When we encode an experience, connections between active neurons become stronger, and this specific pattern of brain activity constitutes the engram. Later, as we try to remember the experience, a retrieval cue will induce another pattern of activity in the brain. —Daniel L. Schacter, Searching for Memory: The Brain, the Mind, and the Past

“What’s Hecuba to him or he to Hecuba That he should weep for her? What would he do Had he the motive and the cue for passion That I have?” —Shakespeare, Hamlet

Finally, cue has a few additional meanings in the world of games and sports. In shuffleboard, the long stick that is used to propel the disks is called a cue. It’s also the name of the long stick used to strike billiard balls.

Queue derives from the Latin word for tail. In British English, it refers to a line of waiting people or automobiles or to taking one’s place in such a line. In this sense, you will often see queue followed by up: The customers queued up to buy the latest smartphone. The expression, “jump the queue” means to cut in line. In computing, to queue means to store and retrieve commands or data in a specific order. A queue is a list of such items. Finally, a queue refers to a braid that is worn hanging down a person’s back. The last definition has the most obvious connection to the original Latin word, but you can see the logic behind all of the meanings. Let’s see how queue works in real life.

“There is no queue at the gate of Patience.” ―Moroccan Proverb

“Those stolid law-abiding queues, so pregnant with catastrophe. Insensible before the wave so soon released by callous fate. Affected most, they understand the least, and understanding, when it comes, invariably arrives too late.” ―Alan Moore, V for Vendetta

“The print queue displays information about documents that are waiting to print, such as the printing status, document owner, and number of pages to print. You can use the print queue to view, pause, resume, restart, and cancel print jobs.” ―Microsoft support website

Cue and queue can both trace their roots back to Latin. However, the words hold different meanings based on where you live. If you live in Britain, a queue is a line to stand in while you wait for your groceries. If you live in the United States, you might play pool with a cue or listen for cues when you act in a play. The words sound alike, but you can easily tell them apart if you look at the context.