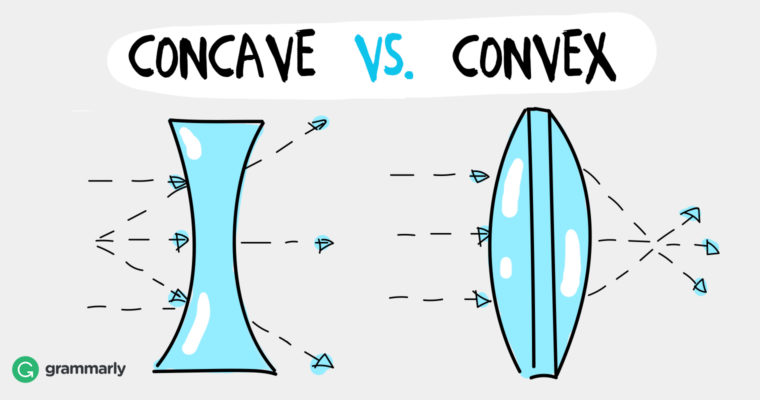 Concave describes shapes that curve inward. The inside part of a bowl is a concave shape.

After six months on a diet, Peter’s once round cheeks looked concave.

Concave can also be used as a noun. A concave is a surface or a line that is curved inward. In geometry, it is a polygon with at least one interior angle greater than 180°.

A convex shape is the opposite of a concave shape. It curves outward, and its middle is thicker than its edges. If you take a football or a rugby ball and place it as if you’re about to kick it, you’ll see that it has a convex shape—its ends are pointy, and it has a thick middle.

Just like concave, convex can be used as a noun for a surface or line that curves outward, and it also has a use in geometry, where it describes a polygon with interior angles less than or equal to 180°.

Finding a mnemonic device for to remember the difference is easy enough. There’s a “cave” in concave, and caves are inward curvatures. That doesn’t work as well for convex, but if you can recall what we said for concave, all you need to do is remember that convex is the exact opposite.

Examples of concave vs. convex

The main parts of the complex are connected by spaces in which dark alternates with light, concave elements with convex and closing-in with opening-up, and the pursuit of extraordinariness is occasionally paused by something quieter.
The Guardian
Get close and you can see your fuzzy reflection in the inner curve of its concave silver surface, as the gold textile billows outward, muted and diaphanous, from the shiny pristine edge of the metal.
Willamette Week
The additional set back floor above the concave floors will be built in a style which “accentuates” the concave shape of the building.
Malta Today
A VR headset is little more than a pair of convex lenses with a display or two hidden behind.
New Atlas
The researchers expected people might perceive the display as two convex spheres with alternating lighting; two disks that continuously morphed from a concave into a convex shape; or—very literally—a convex sphere and a cavity trading places.
Scientific American
Your writing, at its best.
Works on all your favorite websites