Grammarly
Updated on
May 20, 2019Grammar 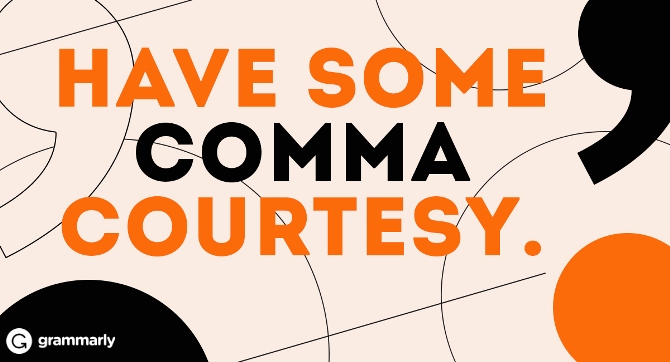 Let there be no mistake—the comma wields a power far greater than its humble looks might suggest. “You will go you will return never in the battle you will perish” is the most famous example of it. This saying is usually attributed to the Oracle of Delphi, and it is supposed to be an answer to the question of whether or not to go to war. If you place a comma before “never,” the answer becomes a green light. Place it after “never,” and the answer becomes a warning against going to war.

In your average business email, a comma is very unlikely to represent the difference between life and death. Still, a misplaced one can change the meaning and tone of the message, which can cause confusion and undesired consequences. So let’s go over the two most important uses for commas in business emails.

A salutation usually has two components: a greeting or an adjective, and the name or title of the person you’re addressing. In the previous example, the salutation is composed of an adjective and a name, and there’s no comma between the two. However, a comma should separate a direct greeting and a person’s name. So if you were to write “Good morning, Mrs. Johnson,” you’d have to place a comma between “Good morning” and “Mrs. Johnson.”

The most common coordinating conjunctions are and, or, nor, so, but, yet, and for. We use them to connect elements in a sentence that are grammatically similar, such as two verbs, two nouns, two modifiers, or two independent clauses. A conjunction can be used to start a sentence, in which case it usually shouldn’t be followed by a comma:

But in the last quarter of 2015, we’ve seen an increase in consumer activity.

If a coordinating conjunction is placed in a list of two items, there’s no need to use a comma before it:

The departments that had most of the activity were toy stores and gift shops.

If, on the other hand, the conjunction is used before the final element in a list of more than two items, a comma may go immediately before it:

Toys, plastic Christmas trees, and spirits went out of stock.

If a coordinating conjunction joins two independent clauses, put a comma before it:

The suppliers were contacted immediately, so we were able to restock the missing items in time.

In the meantime, the consumers were encouraged to look around other departments; and that’s what, it turned out, led to a small increase in sales of non-seasonal items.

In this case, the coordinating conjunction should have a semicolon in front of it.

So there they are—a couple of simple guidelines for using commas in business emails. With these in mind, you can stop worrying about offending your business associates by accidentally sending them informal emails. You’ll also enhance the clarity of your writing. But remember, the comma is powerful; you should study it in detail. Good thing you’re in exactly the right place to do that!