Canceled or Cancelled—Which Is Correct? 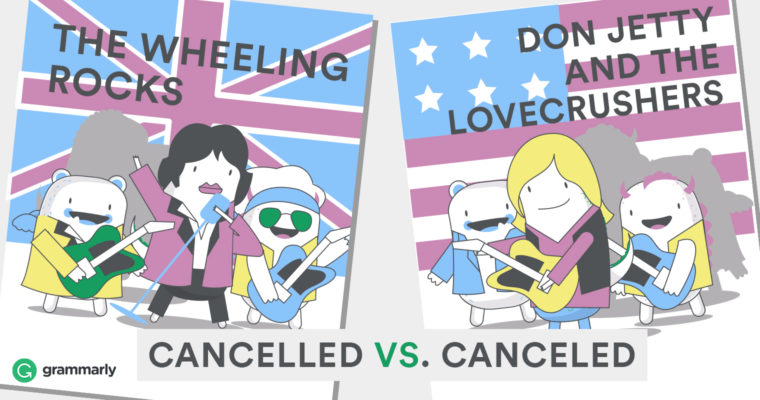 ​​This word is a student’s best friend and a concert-goer’s most dreaded nightmare. Take these two signs:

So, which spelling is correct? The answer depends on where you call home.

Canceled or cancelled is the past tense of the verb to cancel. Both spellings are correct; Americans favor canceled (one l), while cancelled (two ls) is preferred in British English and other dialects. However, while cancelation is rarely used (and technically correct), cancellation is by far the more widely-used spelling, no matter where you are.

For a more in-depth explanation of spelling and the exceptions, keep reading.

Why cancelled and canceled are different

Let’s get into the nitty-gritty. Way back when, a man named Noah Webster (of Webster’s Dictionary fame) decided that some words could get along just fine without as many letters as our friends the Brits put in them. That’s why many American spellings look different from their British counterparts: think color/colour, honor/honour, rumor/rumour.

American English is all about one l, and British English goes for two. [/tip]

For similar word-shortening reasons, Mr. Webster decided to chop the past tense of “cancel” down to one l. This variation first showed up in the Webster’s 1898 Dictionary, though it didn’t fully beat out the double-l spelling until about the 1980s. It’s not a hard-and-fast rule, but it’s the accepted form in American English to this day.

The route with the highest percentage of canceled flights last year was New York LaGuardia to Washington’s Dulles International.

The Wall Street Journal
Is your favorite TV show canceled? A guide to what’s renewed and what’s in trouble.
The Washington Post

And some extra American examples:

Mom and Pop couldn’t muster enough apples to bake a nice warm apple pie, so they went ahead and canceled the county barbecue.
The dudes running the show in Hollywood would never think of canceling the next blockbuster superhero film.
Since the automatic canceler stopped all electronic signals as soon as the tornado started up, it looks like we’ll have to go surfing instead.

However, for any British chap, cancelled has two Ls and always will.

The Beatles never cancelled a gig, even when they didn’t get a nice cup of tea beforehand.
The blokes at the theatre will be cancelling the programme today due to the Queen’s visit.
Since the neighbour’s pyjama party was cancelled , let’s queue for some fish and chips at the pub, mate.
At the end of one of its most difficult weeks of the year, British Airways cancelled 50 flights to and from London on Saturday, the vast majority at Heathrow Terminal 5.
The Independent
Downton Abbey will not be cancelled after fifth season, producer confirms.
The Independent

Now that we’ve traveled (and not travelled, thanks to the same rule) through the spelling rules of British vs. American English, let’s look at the exception. Yes, there’s always an exception.

The word cancellation is almost always spelled with two ls, no matter where you are.

Think of it like this. When you turn the verb “cancel” into past tense, the word stays the same number of syllables (two), so it’s a matter of location whether you use two l’s or one. The -ation that turns the word into a noun, on the other hand, puts a whole new syllable (in fact, two) after the l. The double-l is a like a bridge to those new syllables. At least, that’s one way to keep your ls in line.

Now you can consider your confusion about those words canceled. Cheers!