Awhile vs. A While

Back in 2001, the American nu-metal band Staind released the song “It’s Been Awhile” as a single from their album Break the Cycle. To this day, it remains one of the band’s most recognizable songs, in no small part due to its emotional content and the lead singer Aaron Lewis’s powerful vocals. And while credit should be given where credit is due, there is one thing about the song that might annoy sticklers—awhile shouldn’t have been used in the title of the song. It should have been a while.

The Difference Between Awhile and A While

Obviously, you can say awhile and a while aloud without noticing any difference between the two. They are both pronounced /uh-wahyl/. If you look at the words, you see there’s only a slight difference in spelling—in awhile, there’s no space between a and while, and in a while there is. And both words have something to do with time, so how much difference can a single space really make?

A lot, as it turns out. It’s true that awhile and a while have plenty of things in common, but they are still very different. 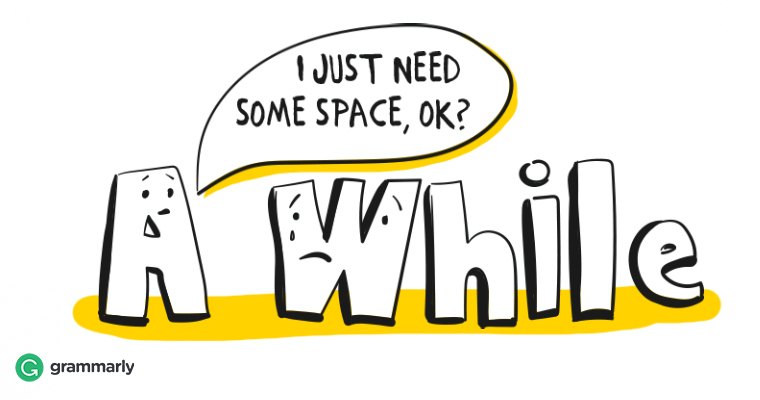 A while is a noun phrase made up of two words—the article a and the noun while. If we suppose that there’s no need to analyze what the article here means, we can focus on the noun: while is an unspecified amount of time. So the noun phrase a while means “a period of time.”

Awhile, written as one word, is an adverb, and it means “for a period of time.” Basically, awhile equals for plus a while. Being an adverb, awhile is used just like any other adverb.

Garfield waited patiently for the bus.

In the example above, the adverb patiently describes how Garfield waited. The adverb awhile works the same way:

Garfield waited awhile for the bus.
Here’s a tip: Want to make sure your writing always looks great? Grammarly can save you from misspellings, grammatical and punctuation mistakes, and other writing issues on all your favorite websites.

You’ve probably noticed that none of these phrases use awhile. That’s because awhile can only be used instead of the phrase for a while, and that’s it. So Staind’s song title actually said “it’s been for a while,” and that doesn’t sound right, does it? You can’t use awhile with prepositions either, because you can’t say “come here in for a while.” A while on the other hand, is much more versatile. This is why a while is used more often than awhile.

Examples: Awhile and A While in Sentences

Cash bars allow the adventurous and the wealthy to continue abusing themselves awhile longer, sending the fist-pumping bros in search of another heavy teat to milk for free. —The Guardian

There are two chairs on the pavement outside the front of the shop for customers to rest awhile, which works because the ready-to-eat goods at Becca’s can all be eaten with one hand. —The Irish Times

For example, you might have kissed good-bye to the tortured artiste types of your youth in favour of someone who cracks a smile once in a while. —The Daily Mirror

After a while, I started to feel a bit more relaxed and calm, yet I still couldn’t force myself to do it on a regular basis. —TIME