How to Write a Standout Argumentative Essay 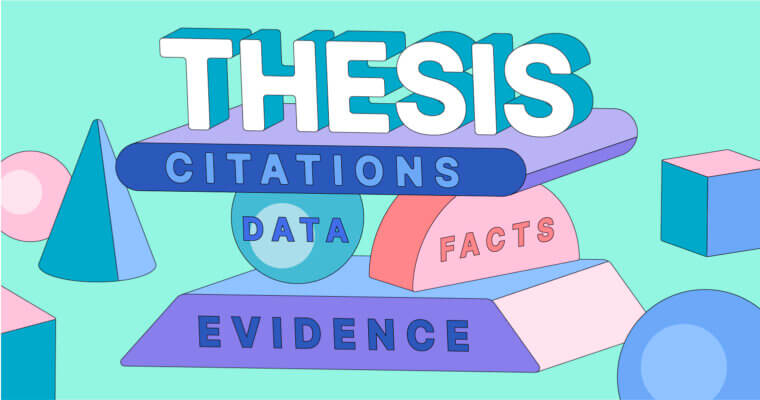 An argumentative essay is a piece of writing that uses factual evidence and logical support to convince the reader of a certain way of thinking. Although many types of essays aim at persuading the reader to believe a specific point of view, argumentative essays rely heavily on hard evidence, drawing on other studies and sources to prove their argument is best.

Don’t let the name fool you: Argumentative essays don’t have to be aggressive or combative. Rather, it gets its name from the style of arguing, whereby the writer presents sufficient research to both support their own claim and invalidate opposing perspectives. When you’re writing an argumentative essay, remember that the goal is to show that your thesis is the only logical conclusion.

Argumentative essays are only as good as their argument, and structuring good arguments requires a little more than just being stubborn (even if it helps!). Below, we run through the most useful techniques for writing the perfect argumentative essay. But don’t take our word for it—our evidence speaks for itself!

What is an argumentative essay?

Likewise, it’s easy to confuse argumentative essays with expository essays, which rely heavily on fact-based evidence and copious research. The main difference is bias: Argumentative essays presume one point of view is correct, whereas expository essays usually present all sides of the argument and leave it to the reader to make up their own mind.

Another distinction of argumentative essays is that the thesis is not obvious. It usually has strong enough opposition to necessitate an explanation of why it’s wrong. For example, “the sky is blue on a sunny day” would be an awful thesis for an argumentative essay. Not only would it be redundant, but also far too simplistic: Your evidence may be “look outside,” and that’d be the end of it!

The idea is that an argumentative essay leaves no doubt that its thesis is accurate, usually by disproving or invalidating opposing theories. That’s why argumentative essays don’t just talk about the writer’s own thesis but discuss other contradicting points of view as well. It’s hard to name one perspective as “true” if you’re ignoring all the others.

Because your entire argumentative essay depends on how well you present your case, your essay structure is crucial. To make matters worse, the structure of argumentative essays is a little more involved than those of other essay types because you also have to address other points of view. This alone leads to even more considerations, like whose argument to address first, and at what point to introduce key evidence.

Let’s start with the most basic argumentative essay structure: the simple five-paragraph format that suits most short essays.

This simple structure serves you well in a pinch, especially for timed essays that are part of a test. However, advanced essays require more detailed structures, especially if they have a length requirement of over five paragraphs.

Some essays need to support more complicated arguments and more definitive rebuttals than normal. In these cases, the three major formats below should serve your argumentative essay for a variety of needs.

When to use it: making straightforward arguments

The Aristotelian or classic argument is a default structure for a clear argument, more like an extension of the simple five-paragraph structure above. It draws on credibility (ethos), emotion (pathos), and reasoning (logos) to prove its points, all of which can be adapted for virtually any argument. In form, it follows a direct and logical path:

3 Explain your opponent’s perspective. Refute their points one-by-one as you go.

When to use it: presenting complex issues with no clear truths or when your thesis is a rebuttal or counterargument.

The Toulmin method was developed to analyze arguments themselves, so it makes sense to use it for essays. Because it’s steeped in logic and deep analysis, this approach best suits complicated issues that need unraveling, but also works well for refuting an opposing point of view piece by piece.

In form, it includes six main areas, but you’re free to organize them in whatever order works best for your essay. Keep in mind that your claim can itself be a rebuttal of another argument, so your entire essay could be disproving another thesis rather than presenting your own.

2  Reasons: your evidence, including data or generally accepted facts

3  Warrant: the connection between your claim and reasons (requiring you to state assumptions explicitly so there’s no confusion)

5  Qualifier: the limits to your own claim, including concessions

6  Rebuttal: addressing opposing viewpoints and criticisms of your claim

When to use it: showing both sides of an argument as valid or when presenting to a mixed audience.

The Rogerian method is simply a middle-ground approach, where you acknowledge the validity of both your thesis and the opposition’s viewpoint. It’s the least confrontational and most respectful, which helps in convincing readers who are naturally biased against your main claim. In form, it follows a five-step structure:

2 Explain your opponent’s perspective first. Validate their points when correct.

4 Bring both sides together. Present a middle ground where both viewpoints coexist.

How to write a good thesis

The thesis, or argument, is the cornerstone of any good essay. If your thesis is weak or full of holes, not even a perfect essay structure can save you.

The thesis itself should be the one takeaway you want your readers to leave with. What are you trying to convince them of, or what do you want them to remember after reading? Knowing this informs all other aspects of writing your essay, including the best structure and format, not to mention which evidence to collect.

For starters, choose a topic you feel strongly about (if it’s not already assigned). It helps if your argument is specific; having a broad or general argument means more facets to examine, which can make for a wordy essay.

It also helps to consider your audience. You don’t always have to tell readers what they want to hear, but their biases should influence how you write your essay, including your wording and how much credit to give the opposition.

Above all, choose a thesis with sufficient evidence. Argumentative essays thrive on factual proof from credible sources, and you don’t want to waste time searching for data that doesn’t exist. If you can’t find enough facts to back up your thesis, maybe you shouldn’t argue that point in the first place.

How to write an argumentative essay: the writing process

Argumentative essays follow the same recommended writing process as other kinds of writing, albeit with more emphasis on researching and preparing. Here’s a brief overview of how to adapt the process for argumentative essays:

1  Brainstorming: If your argument is not provided in the assignment, take some time to think up a good thesis based on our guidelines above.

2  Preparing: This phase is for collecting all the evidence going into your essay, as well as writing an outline. Because proof is key to argumentative essays, set aside ample time for research until you have all the support you need. It’s also a good time to outline your essay, answering questions like when and how to discuss opposing viewpoints.

3  Drafting: Write a rough draft of your essay. It helps to include any data and direct quotes as early as possible, especially with argumentative essays that often cite outside sources.

4  Revising: Polish your rough draft, optimize word choice, and restructure your arguments if necessary. Make sure your language is clear and appropriate for the reader, and double-check that you effectively made all your points and rebuttals.

5  Proofreading: Go through your draft and focus exclusively on fixing mistakes. If you’re not confident in your grammar skills or diction, use Grammarly.

Although optional, it always helps to have a fresh set of eyes on your essays before finalizing it. See if your argument is strong enough to convince your friends!

Support your argument with concrete facts

Do plenty of research until you have enough data to support each of your main points. Feel free to cite other sources or studies to improve your credibility as well. Try to withhold your personal opinions and feelings as much as possible—let your evidence speak for you.

Be proactive about language

In an argumentative essay, tone and style are more important than you may think, especially if you’re criticizing another person’s perspective. Be respectful when choosing your words and phrasing. Using an aggressive tone reflects worse on the writer than the target, even if rebutting a despicable point of view.

Use aids for style and grammar

Even the smallest typo can derail the most carefully planned argument. The problem is, it’s hard to formulate the best possible argument if you’re distracted by spelling and grammar.

Grammarly finds all of your writing mistakes for you so you can stay focused on what’s important. It even checks your tone and clarity to make sure your true argument always shines through and comes across as intended. See how Grammarly can help your next writing project by downloading it now.