How to Write an Apology Letter 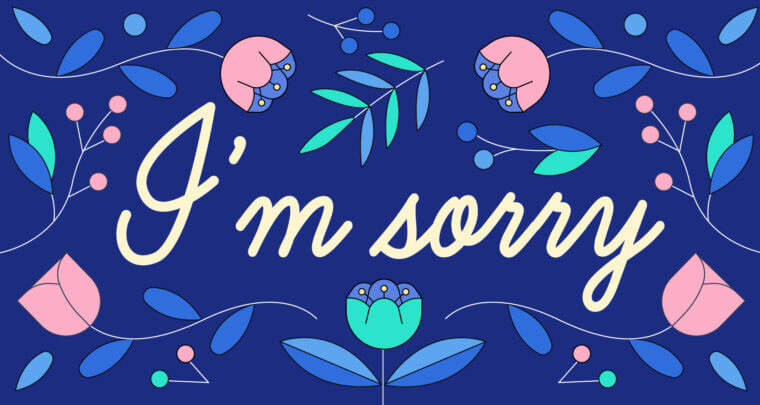 There may come a time in your life (or maybe it’s already happened) when you offended someone or let them down. Depending on the situation, a simple “I’m sorry” might not be enough to make up for the mistake or hurt you caused.

Writing an apology letter for a mistake or wrongdoing might be the first step in repairing the recipient’s dignity and restoring respect and trust in the relationship.

What is an apology letter?

The purpose of an apology letter is to atone for a mistake, offense, or harm that you caused toward another party. In addition to acknowledging your responsibility in the situation, it’s an opportunity to validate the recipient’s experience and feelings. It’s also a way to begin to restore trust and communication in the relationship by affirming how you’ll work to repair the damage and avoid causing offense in the future.

Keep in mind that an apology letter is not a tool for justifying your actions or exculpating yourself. The letter is for the recipient, meant to address your actions and their feelings.

When to write an apology letter

An apology letter can be valuable in situations when you’ve caused or contributed to wrongdoing or a mistake that adversely affected another person.

For example, you might want to write a letter to a friend, family member, or partner whom you care about but have insulted or taken for granted. Apology letters can also be useful when you’ve compromised other relationships, such as those in the workplace. You might decide to write an apology for a job-related mistake or for failing to give a colleague credit.

How to write an apology letter

Writing a letter of apology starts with the apology itself, but before writing down your thoughts, make sure you feel calm and clear-headed.

Give yourself enough time to process your own emotions and the scenario so you can understand the recipient’s perspective. When you’re ready to apologize, include the elements below in your letter.

At the beginning of your apology letter, write “I’m sorry for . . .” or “I apologize for . . .” followed by what you’re specifically remorseful about. Expressing remorse upfront shows humility and awareness about how you’ve affected the other person.

Next, recognize the effect that your actions had, whether on the recipient, a group, or a larger situation. Accepting responsibility for how you impacted others demonstrates that you understand why they’re hurt, upset, or disappointed. This is a critical step because it validates their feelings, which can help them feel heard and seen.

Sometimes it might seem helpful to briefly explain what happened that led to the offense. However, be cautious about making excuses for your behavior. A recipient who’s slighted may not be interested in the reason behind why you’ve broken their trust—only that you have.

3 Atone for the wrongdoing

In this part of an apology letter, express your wish to make amends. Offer suggestions on how you plan to change your actions moving forward. Avoid statements, like “Tell me what I can do to make this right” which puts the burden of finding a way forward on the recipient.

Instead, do the mental labor by bringing your own solutions to show that you’re coming from a genuine place of learning and goodwill.

Reiterate your desire to rebuild from this experience together. And, assure them that you’ve learned from your mistake.

When you’re finished writing the apology letter, it should be concise and honest. Importantly, it should demonstrate that you hear and empathize with the recipient’s experience.

Remember that an apology letter doesn’t guarantee the other person’s forgiveness. It’s the first step to potentially recovering lost faith in a relationship that’s important to you.

What not to include in an apology letter

Maintaining objectivity in an apology letter can be difficult, even when you know apologizing is the right thing to do. Below are a few tips on what to exclude from an authentic written apology:

Assigning blame: This might look something like, “If you hadn’t ignored my texts, I wouldn’t have been in such a bad mood.” This kind of language puts the onus on the other person as if to say they could’ve “done better,” instead of taking responsibility for your own actions.

Long-winded explanations: While using an explanatory approach might clarify how the situation developed, there’s a fine line between that and rationalizing the situation to avoid fault. The point of the letter may also get lost in a reiteration of what happened.

Self-pity: Infusing an apology letter with statements like, “I’m such an idiot,” “I don’t deserve kindness,” or “I never get anything right” takes the focus away from the recipient’s experience. It attempts to draw them into supporting and reassuring you instead of focusing on how you sincerely own up to your mistake.

Insincere apologies: Words to the effect of “that’s not how I meant it” or “people make mistakes” invalidate the feelings of the other party. Regardless of your intent, acknowledge your culpability for the outcome.

Passive-aggressive tone: A lot of feelings can arise after realizing that you’ve hurt someone. For example, you might secretly feel annoyed or be compelled to quell the conflict immediately as a means of self-preservation.

Passive-aggressive statements like “I’m sorry you felt offended” suggest that you’re not sorry for the harm you’ve caused, but rather are sorry that you’re faced with the consequence of your transgression. On the other hand, writing a barrage of apologies such as “I’m sorry, I’m sorry, I’m sorry” subconsciously seeks to quiet the other person quickly to avoid further conflict.

Examples of a short apology letter

Below are examples of concise apology letters in different life situations.

Sample apology letter to a manager

I apologize for my rude tone while talking to our client during yesterday’s video call. Upon further reflection, I recognize that I not only presented myself unprofessionally but also disrupted the meeting’s productivity by creating tension. I see that I’ve put the team and the company in a difficult situation.

I’ve privately reached out to my team members who were present to personally apologize for putting them in an uncomfortable spot. I’m committed to doing better in high-pressure situations and learning conflict-resolution strategies to help me communicate according to our company standards. I sincerely apologize for my mistake and will, of course, accept the consequences of my actions.

Sample apology letter to a friend

I’m so sorry about the thoughtless comments I made about your choice to work as a freelancer. They were judgmental and hurtful, and I deeply regret making them.

You trusted me by sharing your plans to pivot careers, and I broke that trust. Instead of being a supportive friend, I projected my own fears onto you. That was wrong of me, and it’s inexcusable.

After reflecting on it more, I realized that I cut you off so many times while you tried to update me about your career transition. Moving forward, I promise to be respectful to you by listening with an open mind and open heart.

I’m truly sorry for the snide remarks—you didn’t deserve that, and our friendship means everything to me. I’d love to pick up our conversation about your plans when we see each other again.

What is an apology letter?

An apology letter is a written acknowledgment of how the writer’s behavior or words adversely affected another person or group. It can be used to make amends in both personal and workplace situations for a mistake.

What is the purpose of an apology letter?

What are a few tips for writing an apology letter?

To write a heartfelt apology letter, focus on the recipient’s feelings and experience. Avoid inadvertently using the letter to justify yourself and your perspective. You can achieve this by writing a clear and concise apology for the specific offense and acknowledging your responsibility in the situation. Then, describe how you’ll avoid old patterns in the future.