Alright or All Right—What’s the Difference? 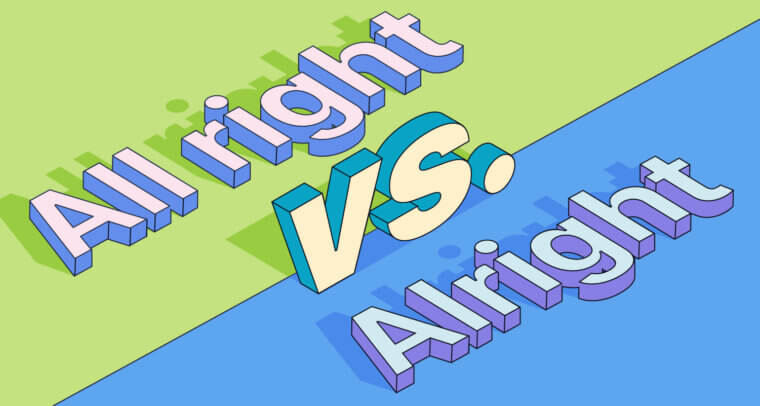 Today, both forms are included as acceptable words in dictionaries, like Merriam-Webster and Oxford, with minimal differences between their meanings. However, despite both versions being legitimized and justified by many writers, some are steadfast in their belief that “alright” has been incorrect for more than a century and still is.

What do “all right” and “alright” mean?

There are currently two forms of this word because the English language is continuously changing, and historically, words often had many different forms before they became standardized. For example, “altogether” was once written as “all together,” “all-together,” and “alltogether.”

The two-word spelling of “all right” takes on multiple meanings depending on the tone and written form that’s used. “All right” can be used as an adjective or adverb to mean “adequate” or “satisfactory.” It can also be used as an affirmation that suggests “correctness.”

When to use “all right” vs. “alright”

Both forms are correct by US writing standards. The main consideration when it comes to using “all right” versus “alright” is the purpose of your writing and how it might be received by your reader.

Some posit that “alright” is an appropriate spelling for informal usage, like in a text message or brief email to a coworker or in fiction writing to characterize colloquial dialogue. Conversely, the use of “all right” is better suited for formal correspondences, such as in a professional report, official business letter, or academic paper.

If you choose to disregard this perspective altogether, however, you wouldn’t be wrong. Using the form “alright” in formal writing, for example, is no longer considered incorrect. You’d also be correct if you prefer to stick with “all right” regardless of what you’re writing.

“All right” and “alright” examples

Below are a few examples of how the various forms of “alright” and “all right” are used in sentences.

“All right” in a sentence

“Alright” in a sentence

“All right” vs. “alright” FAQs

What does “all right” mean, and what about “alright”?

Is there a difference between “all right” and “alright”?

There’s no significant difference between the meaning of “all right” and “alright.” However, since “alright” is still a relatively new form—albeit one gaining in popularity—it’s not always accepted in formal writing.

For example, in academic-university research papers, the traditional two-word version “all right” might be more acceptable to your professor. Similarly, your manager might expect to see the spelling “all right” in a formal work report.

When should you use “all right” vs. “alright”?

Deciding to use “all right” versus its shorter modern spelling “alright” is a matter of preference. Although both forms are technically correct, the topic is still debated among writers. If you’d like to take the safe route, the older “all right” version is the most widely accepted, particularly in formal writing. “Alright” is growing in popularity and is frequently used for informal purposes.