What Does “A Whole ’Nother” Mean? 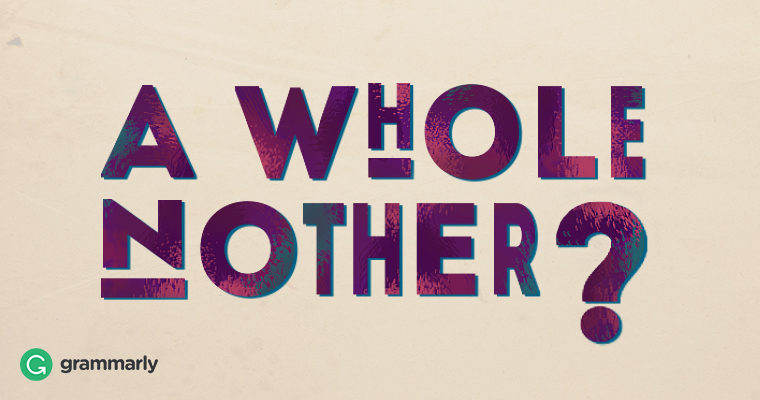 If you are a fan of the show MadTV, you may have heard the phrase “a whole ’nother level.” Even if you don’t watch the show, you might encounter the phrase in casual conversation. If it appears in print, it is often a quote or a reference to the television show. What does this popular expression mean?

Where did the phrase a whole ’nother come from?

Though the phrase began in everyday speech, it became famous through a MadTV skit. Keegan-Michael Key, a comedian, plays a character named Eugene Struthers. As he delivers packages, Eugene often encounters celebrities. He wastes no time in commending their work, telling them what aspects of their craft they took to “a whole ’nother level.” For example, in one episode, Eugene chances upon the actress Eva Longoria. He tells her he likes her show better than previous programs with female leads: “The Golden Girls is down here like this on this level. And then Dixie Carter and the designing [women] are up here on this level…but ya’ll on Wisteria Lane, ya’ll take that to a whole ’nother level.”

Examples of a whole ’nother

The expression is all over the Internet now. People use it to describe what they find amazing or unprecedented. If you haven’t already guessed, the ’nother in “a whole ’nother” is the word another with its initial vowel sound omitted. Taking something to “another level” or “the next level” means to do better than average. It’s a compliment that indicates that whatever or whomever is being praised is the best yet. Here are some examples:

Jobsnhire.com: “If you know Leonardo, Donatello, Raphael and Michelangelo, then you know they make up the iconic “Teenage Mutant Ninja Turtles.” The second movie installment, “Out of the Shadows,” took the 32-year-old franchise to a whole ’nother level.”

iDigitalTimes.com: “But now the Chicago rapper has a reached a whole ’nother level of achievement based on popular demand. Billboard has reported that Coloring Book is the first-ever streaming-exclusive album to chart on the Billboard 200.”

The word level doesn’t always accompany“whole ’nother.” If the phrase appears along with another noun, it means “totally different, unprecedented, or unique.” Dr. Cuthbert Soup used the phrase in the title of his children’s book, A Whole Nother Story. Notice how “a whole ’nother” appears in these articles:

Vibe Magazine: “[Kenan Thompson]: Hip hop is so good for that—taking a little piece and going in a whole ’nother direction with it.”

When to use the phrase a whole ’nother

Critics of the phrase point out that ’nother doesn’t make sense with whole, because it would be like saying “a whole another.” Although the phrase is here to stay in casual conversation, in serious writing it’s best to stick with “a whole other level” or even “another level.” Even in speech, some people do take care to avoid it. In one interview about the San Jose Sharks, the team captain stated: “I still think we have another level. They’re playing at a good pace right now and we can definitely go better.” Here the phrase is used in a sense closer to its literal meaning; the coach is saying that there is room for advancement whereas “a whole ’nother level” usually indicates that the level of achievement is already high. An Enca.com article title uses “another level” in the sense of unprecedented, “Record-chasing man takes it to another level.”

Now when you watch MadTV, you don’t have to be confused about what Eugene Struthers means when he says “a whole ’nother level.” He means that what he is describing is outstanding or unique. But remember: this expression isn’t right for formal writing. If you want to give high praise there, you should choose a different phrase.