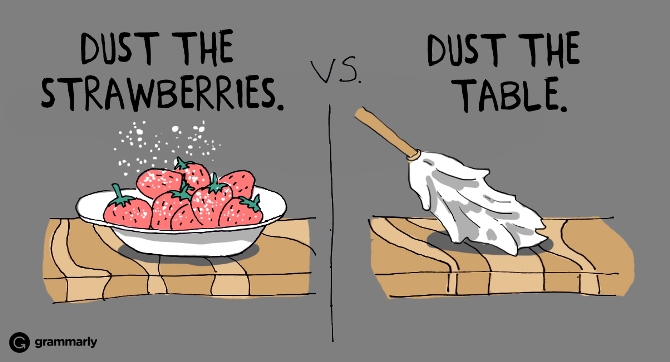 Have you ever encountered a word and learned that it meant the opposite of what you remembered? If so, you may have come across a contronym.

A contronym, often referred to as a Janus word or auto-antonym, is a word that evokes contradictory or reverse meanings depending on the context. Specifically, a contronym is a word with a homonym (another word with the same spelling but different meaning) that is also an antonym (a word with the opposite meaning).

Generally, contronyms became contronyms in one of two ways: (1) different words with different etymologies converged into one word, or (2) one word acquired different and opposite meanings over time.

Here are some contronyms that are commonly used as verbs in the English language:

Definition 1: to fasten or secure with a buckle (i.e., a device with a frame, hinged pin, and movable tongue, designed to fasten together two loose ends of a belt or strap).

Example 1: Our hiking instructors told us to buckle our backpacks to our bodies during rigorous climbs.

Definition 2: to bend, warp, or collapse under pressure.

Example 2: I felt my legs buckle as I hiked up the steep mountain with my heavy backpack.

Example 1: The shy baby rabbit cleaved to his mother’s body.

Definition 2: to split or divide, especially by cutting.

Example 2: The hunter uses a Swiss Army knife to cleave the rabbit’s meat from the bone.

Example 1: My mother asked me to dust the window shades before the party.

Definition 2: to sprinkle with soil or dust.

Example 2: I watched my mother dust my birthday cake in a thin layer of white sugar.

Definition 1: to instruct, prescribe, or command.

Example 1: For my sake, our family counselor enjoined my parents to communicate with each other after their divorce.

Definition 2: to prohibit or forbid (especially via an injunction).

Example 2: After my parents’ divorce, the court enjoined my abusive mother from contacting me and my father.

Definition 1: to monitor or inspect.

Definition 2: to fail to notice or choose not to emphasize.

Example 2: Because they are tired, my teachers often overlook the spelling errors in my homework.

Definition 1: to skim or read without attention to detail.

Example 1: My mind wanders when I peruse chemistry textbooks because I have no interest in science.

Definition 2: to read or examine in detail.

Example 2: To study for the final exam, I sit down in a quiet room to peruse my chemistry notes.

Example 1: When she is bored, my daughter ravels her hair into huge knots with her hands.

Definition 2: to disentangle threads or fibers.

Example 2: My daughter uses tweezers to ravel stubborn knots in her hair.

Definition 1: to sell or lease the use of a commodity.

Example 1: The landlord rents her apartment in the city to a young couple.

Definition 2: to buy the use of a commodity.

Example 2: Depending on how much money you want to spend, you can rent a room or an entire apartment from the landlord.

Definition 1: to permit or grant approval.

Example 1: In some countries, the government sanctions the ownership of guns by private citizens.

Definition 2: to condemn or penalize.

Example 2: In some states, the government imposes sanctions on the ownership of guns by private citizens.

Definition 1: to protect or conceal.

Example 1: Because he did not have a hat or umbrella, he used a newspaper to screen his face from the sun.

Definition 2: to show or broadcast (a movie or TV show).

The next time you run into a word that confuses you, keep in mind that seemingly simple words can have opposite or multiple implications, and that the meaning of a word depends on both its dictionary definition and the context in which it is used.