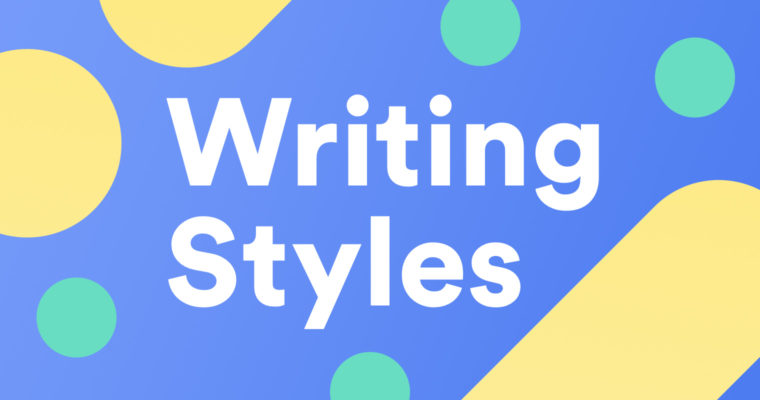 There are practically infinite things to read—and innumerable ways to write. But there are only four different types of writing styles. Do you know them? For that matter, what is style in writing?

We’ll unpack the elements of style in writing and see how they sometimes overlap. We’ll also compare writing style examples. From poetry to advertisements to scholarly journals, you’ll see how the different styles of writing interconnect.

To begin, the writing style you’re currently reading is . . .

Expository writing is long on facts and short on storytelling and literary flourishes. It can inform or instruct readers about a subject, but in its purest form, it’s not out to change anyone’s mind.

If you’re wondering how many moons Saturn has or what time of year to plant tulips or how to cook chana masala, you’re likely searching for a piece of expository writing to get the answer.

This style shows its work by including quotes, links, citations for sources, and tables and charts to highlight key data points. Expository writing that involves instructions ideally keeps them brief and easy to understand—and may include illustrations.

Generally, this style shies away from bold opinions or value judgments, instead delivering straightforward information and data. That said, as we’ll see below, expository writing can sometimes blur with other styles. Next up:

Watch how one small change transforms this sentence from dull to engaging! 🚀 pic.twitter.com/a6F5dkmiHI

Descriptive writing is, well, just that. It may be actual poetry, or simply poetic, often using metaphors, as well as adjectives, adverbs, and language that activates the reader’s senses. It also zooms in to appreciate minute details.

What descriptive writing looks like:
The twisted vine swayed like a pendulum outside the window. Each time the wind picked up, it practically knocked on the screen, as though politely asking to be let in.

Indeed, on its own, descriptive writing is usually brief—but it also makes regular appearances as an element of lengthier styles, like:

The narrative style of writing tells a story. Its hallmark is a plot with a beginning, middle, and end, like so: Romeo and Juliet’s families loathe each other. The two star-crossed lovers fall for each other anyway. Tragedy ensues.

As noted above, the narrative style tends to run longer than strictly descriptive writing, but it may contain descriptive passages, such as when an author pauses to detail a character’s appearance or admire the setting’s architecture. The same sometimes goes for expository sections full of facts.

As the name implies, this writing style sets out to win its audience over to a certain point of view. It builds an argument by presenting evidence and justifications to back up an opinion.  This may lead to a call to action: Vote for this candidate, buy this product, support this cause, etc.

Notably, persuasive writing can incorporate or even resemble other styles. For instance, a political speech may include narrative elements, telling the story of a candidate or of people affected by the issues. And while expository writing sets out to deliver information, persuasive writing uses facts selectively to build its case.

Being able to recognize these different styles and discern what a given piece of writing aims to accomplish is crucial to becoming a sharper reader—and a stronger writer.

Writing TipsCaptivate Your Reader by Writing the Perfect Hook

Writing Tips15 Writing Prompts for Self-Reflecting on Your Year

Writing TipsHow to Respectfully Disagree in Writing
Writing, grammar, and communication tips for your inbox.