How to Spring Clean Your Writing 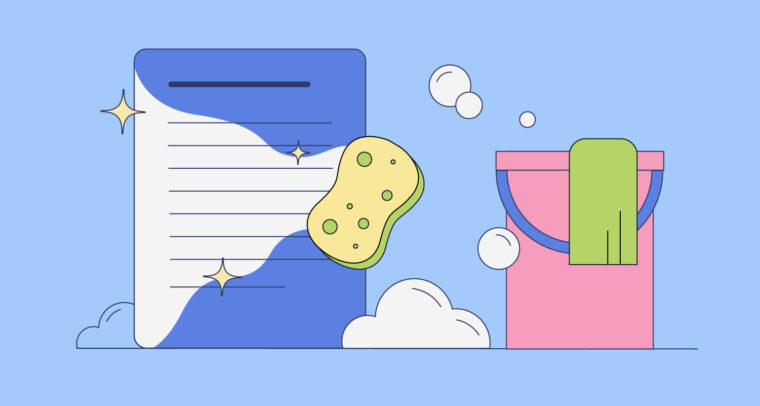 Does your writing feel cluttered?

Over winter, you fell into the habit of drafting dense paragraphs that feel stuffy and humid, like a cramped apartment with a wheezing, determined radiator. Or your structure fell into madness, like a closet seething with mysterious solvents, loathsome sporting gear, and drawers of mismatched screws.

Now’s the time to dust off your style, haul out the verbiage, and ready your next project for sunshine and daffodils. Crack a window and let in the fresh breeze, because here’s how to tidy up your writing.

In writing, as in spring cleaning, no luxury is greater than empty space. Just as you want your home to feel less crammed, so too with each sentence. We’ll start by taking inventory of what you can throw out.

Strong sentences are often short and direct. To streamline, edit out unnecessary words. Frequent offenders include adverbs like “actually,” “basically,” “currently,” and “seriously.” Here’s an example.

Before: Your writing could seriously improve if you remove adverbs that are actually basically extraneous.

After: Your writing could improve if you remove extraneous adverbs.

Weasel words like “maybe” and “kind of” are another source of wordy clutter. These add squishiness and uncertainty, and are best left to cagey public officials in election years.

Before: Your writing might be said to benefit from the removal of what are perhaps seen as weasel words.

After: Your writing will benefit from the removal of weasel words.

Sometimes rearranging a sentence can make it more muscular, so make a game of spotting opportunities to condense. Let it become automatic. We can further tighten the last example this way:

After 2.0: Removing weasel words will benefit your writing.

Breaking complex ideas up into shorter sentences also helps. So does making sparing use of rarefied words. Consider this example.

Before: Although opaque diction frequently reflects a zenith of recreational sesquipedalia, a premium is placed upon language that mitigates the cognitive load for the presumed audience.

After: Highfalutin words are fun. But your best choice will often be straightforward and conversational.

More readers will understand and enjoy your writing when it’s crisp and tidy. In fact, we believe better writing can improve your life.

Know what you’ll put where

As with the vernal ritual of clearing out a musty attic or garage, planning helps. Start with a structure in mind and you’ll work more efficiently, whether you’re drafting a report or a novel.

Skilled storytellers often work from outlines and know how many words or pages they’ll expend on each plot point or scene before they start writing it. This also helps you tackle pieces of the story out of order. Foreshadowing your big ending is easier when you’ve already written it.

Nonfiction structures often follow a principle called “progressive disclosure,” where you start with the most important facts before advancing to details and background information. This holds whether you’re a journalist crafting a breaking story’s lede or an analyst piecing together the executive summary of a policy report.

The key with outlining is to avoid surprises. Just as you don’t want to discover a doxy infestation in your curtains, you don’t want to find yourself in a late panic over a vital transition that doesn’t work, or a conclusion that feels vexingly unsatisfying.

Decide what to keep

Improving your writing also means honing your editing skills. Because you’d prefer not to burn half your day tinkering with phrasing, it’s often better to edit after you’ve drafted a piece, rather than while you’re in the midst of it. You’ll want to revisit your draft with fresh eyes.

One technique is to finish a section, then set it aside. Take a walk around the block, sip some water, then come back. You’ll be surprised at what you missed before—what cuts become obvious, and what substitutions turn a passable sentence into one that glows.

Another way to test your draft is to read it out loud. If a sentence is too long to finish without stopping for a deep breath, chances are you’re better off dividing it into smaller chunks. Stumbling repeatedly over the same awkward phrase can warn you it needs revising. If a sentence you read aloud feels ridiculous, it usually is—looking at you, recreational sesquipedalia.

Still, it’s tough to edit yourself. That’s why reporters, technical writers, and fiction authors all take feedback from editors. If you enjoy the privilege of counting on a great editor, make sure to say thanks. If one isn’t handy, it’s okay to call a friend or even read to your cat. Just having the extra set of ears in the room will help.

Learn from the greats, and the not-so-greats

Anything you read can help you polish your writing.

Sometimes it’s a brilliant author demonstrating exactly how to break a rule that’s been irking you. For instance, while it’s a good policy to avoid complex punctuation, sometimes it just works, as in this example from the New Yorker:

Tents and tepees sprawled along the banks of the Cannonball River; Yellowbird-Chase’s uncle, who joined us, joked that they reminded him of “powwows in the old days, when we came by travois”—horse-drawn sleds once used by the Plains Indians.

If you can’t see a logical way to avoid breaking such a rule, go with it. Seeing this done elegantly is a lesson in literary craftsmanship.

Other times you’ll run across the opposite—writing that was done in a hurry by someone with a fever. The sight of it will be etched in your mind as exactly the type of work you don’t want to turn in. In his book On Writing, Stephen King recalls running across a sci-fi novel that abused the word “zestful” to the point of distraction.

Characters watched the approach of ore-bearing asteroids with zestful smiles. Characters sat down to supper aboard their mining ship with zestful anticipation. Near the end of the book, the hero swept the large-breasted, blonde heroine into a zestful embrace. For me, it was the literary equivalent of a smallpox vaccination: I have never, so far as I know, used the word zestful in a novel or a story. God willing, I never will.

Whatever you read, consider it critically. Pull out a pen and mark up your magazines. Ask yourself: What stands out, and why? Where does it fail? When you find a clunky sentence, how would you recast it? Or when you run across a gem, which word or phrase makes it sparkle? Exercise this muscle as a reader and you’ll find it’s stronger when you write.

Other Grammarly tips to straighten up your writing can be found right here.