Why English Is a Germanic Language 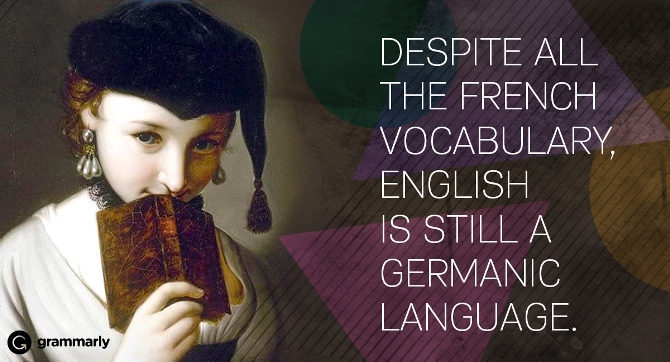 How important is family to you? Researchers say that strong family bonds contribute to longer, healthier lives. If that’s true, building loving relationships can benefit you. Believe it or not, languages have families too! Linguists categorize languages into families, or groups, with similar backgrounds. English is part of the Indo-European language family. Tracing the family tree of the English language will help you understand how English fits into this particular language family.

Here’s a tip: Want to make sure your writing shines? Grammarly can check your spelling and save you from grammar and punctuation mistakes. It even proofreads your text, so your work is extra polished wherever you write.
Your writing, at its best
Grammarly helps you communicate confidently

First, visualize your family tree. How far back can you trace your genealogy? Your parents and siblings would occupy the branches closest to you. Then, the tree branches extend upward to include grandparents, great-grandparents, and so on. Some people can trace their family for generations, but everyone eventually reaches a point where they lose track of the names.

West Germanic languages all trace back to one parent language. No one knows its name or exactly how it sounded. Linguists theorize its characteristics from modern languages that descended from it. Just like children who inherit features from their parents, languages that share West Germanic parentage have family characteristics. Of course, not every language of the group has every single trait. In humans, green eyes and curly hair might run in a family. However, features of individual children may vary. Of three children, perhaps only one has green eyes and curly hair. Another may have green eyes, but straight hair. The third might have curly hair and brown eyes. Still, when they stand together, onlookers may declare that they certainly look alike! Languages within the same family exhibit similar variations. To illustrate, compare “Good morning” or “Good day” in some of the Germanic languages. There’s the German Guten Morgen, the Dutch Goedemorgen, the Swedish God morgon, and the Danish Godmorgen. Not twin phrases, exactly, but don’t you see a definite family resemblance?

There is evidence that thousands of years ago, the people of southern Scandinavia and northern Germany spoke this ancestor language of English. Speakers of this proto-language migrated. As they went their separate ways, the language evolved differently in each group. Eventually, the languages became distinctly different tongues, but they retained some similar features that make them identifiable as part of the same language family. To compare, let’s look at “Good day” in the Romance languages. These languages fall into one of the most widely-spoken subgroups of the Indo-European family, but they are not on the same branch as the Germanic languages. The French Bonjour is quite similar to the Italian Buongiorno. Yet, the terms are unlike the English ones because the Romance languages are not as closely related to English as the Germanic languages are.

Wait a minute! There are plenty of English words that are almost exactly like their French or Italian equivalents. And doesn’t English borrow a lot of phrases from the Latin-based Romance languages? Yes, thousands of English words come directly from Latin. However, the incorporation of Latinate words into English is a rather recent development when compared to the entire history of its evolution. Rather than evolving solely from the Germanic root language, some words arrived through intermarriage.

Linguists use many factors, such as grammar, phonology, and vocabulary, to determine the historical ancestry of modern languages. The overall composition of English reveals strong Germanic roots. It’s official: English is a proud member of the West Germanic language family! Have you learned to speak other languages besides English? Or is a different language your native tongue? All languages have family lineages that are fascinating to trace. Why not do a little research? Getting to know the history of languages will strengthen your appreciation for the ones you speak.