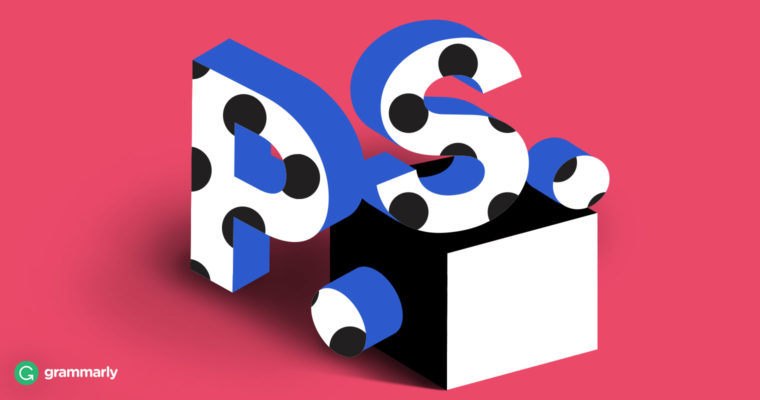 In the days before email, Paul McCartney famously sang, “PS I love you” on The Beatles’ 1963 album, Please Please Me. But what does PS mean and how do we use it in modern communication?

What is the meaning of PS?

PS stands for postscript. It comes from the Latin postscriptum, which literally means “written after.” A postscript is an additional thought added to letters (and sometimes other documents) that comes after it has been completed.

In the days of handwritten and typed letters, we often found ourselves remembering something we wanted to include only after we’d signed off. That’s where a PS came in handy. It’s also often used for effect to add a clever or funny afterthought. It can be added for emphasis, or even as an argumentative “So there!” It’s a tool still used in direct and email marketing, which we’ll talk about in a moment.

The P.S. is the most charming part of a letter. It’s the wink you give as you walk away.

—Shaun Usher, author of Letters of Note, for The Wall Street Journal

How to punctuate and format PS

Should PS be capitalized? How is it abbreviated; with (P.S.) or without (PS) periods? Should you use any trailing punctuation? Surprisingly, there are no hard and fast answers to these questions.

The Cambridge Dictionary suggests that PS is the proper format in British English.

PS Don’t forget to let the cat in before you go to bed.

The Cambridge Dictionary also says that P.S. (with periods after each letter) is the American English format. Indeed, you’ll often find it abbreviated as such in the US. But The Chicago Manual of Style favors PS, without the periods.

The verdict? Usage varies, and PS doesn’t factor into most style guides. The safest bet is to capitalize the P and S (use periods after each letter if that’s your preference), and leave out any trailing punctuation.

PS once saved us from having to edit or rewrite an entire letter just to include an important afterthought. But email allows us to go back and edit before sending. Technically, we could avoid the use of PS altogether in electronic communication. But should we?

Not really. PS is still useful for effect, and it’s a great way to get a specific point noticed. Although the Internet has made us a culture of skimmers rather than people who read things like email word-for-word, we tend to notice what’s at the beginning and end of a text. Can you think of a time when you didn’t read the PS in an email you cared enough about to open?

Here’s a tip: People wonder—does the
PS come before or after the signature? Since a postscript is an addition that comes after a letter is completed, it should always follow the signature.

Including a PS has long been a direct mail marketing strategy. Statistics once showed that as many as 79 percent of people who opened a direct mail letter would read the PS first. Although times have changed, email marketers still swear by it as a way to reiterate a call to action, create FOMO, provide some sort of bonus information or offer, or even share a testimonial.

Examples of PS in a letter

To demonstrate just how effective a PS can be, here are some examples from letters written by famous and notable people. (Read more at Letters of Note.)

We opened this article with The Beatles, so let’s return to that theme for a moment. Here’s a letter John Lennon famously wrote to a groupie who dissed Yoko Ono. This PS isn’t exactly an I love you.

Yoko’s been an artist before you were ever a groupie. Why don’t you open your box and dig ‘Mind Train’ on [Yoko/Plastic Ono band album] ‘Fly’? Your prejudices can’t be that deep.

P.S. You might have an aging problem. Me? I wouldn’t go back one day!

This excerpt comes from a letter Ronald Reagan penned to his son, Michael, in 1971, shortly after Michael was married.

. . . Mike, you know better than many what an unhappy home is and what it can do to others. Now you have a chance to make it come out the way it should. There is no greater happiness for a man than approaching a door at the end of a day knowing someone on the other side of that door is waiting for the sound of his footsteps.

P.S. You’ll never get in trouble if you say “I love you” at least once a day.

In 1973, four years before it was published, Philip K. Dick sent his agent, Scott Meredith, an outline of his novel A Scanner Darkly. This cover letter includes an enthusiastic PS.

Here is the outline for my proposed new novel. A SCANNER DARKLY, which I told you about. It’s a good long outline, running well over sixty pages. I guess you can’t sell it to any publisher until I write a bunch of sample chapters, but anyhow this is what I’ll be working on for quite some time.

If you’d like to show it—for example to Doubleday—that would of course be fine with me. Otherwise, hang onto this outline while I continue from my carbon.

Let me know what you think of it, and meanwhile I’ll keep you posted as to how I’m coming with the novel itself.

Influential American physicist Richard Feynman (a 1965 Nobel Prize winner) lost his wife and high school sweetheart, Arline, when she died of tuberculosis at age 25. In October 1946, sixteen months after Arline’s death, he wrote her a tender love letter, which remained in a sealed envelope until after his death in 1988.

. . . I know you will assure me that I am foolish and that you want me to have full happiness and don’t want to be in my way. I’ll bet you are surprised that I don’t even have a girlfriend (except you, sweetheart) after two years. But you can’t help it, darling, nor can I — I don’t understand it, for I have met many girls and very nice ones and I don’t want to remain alone — but in two or three meetings they all seem ashes. You only are left to me. You are real.

My darling wife, I do adore you.

I love my wife. My wife is dead.

PS Please excuse my not mailing this — but I don’t know your new address.