What Are Vowels? Definition and Examples 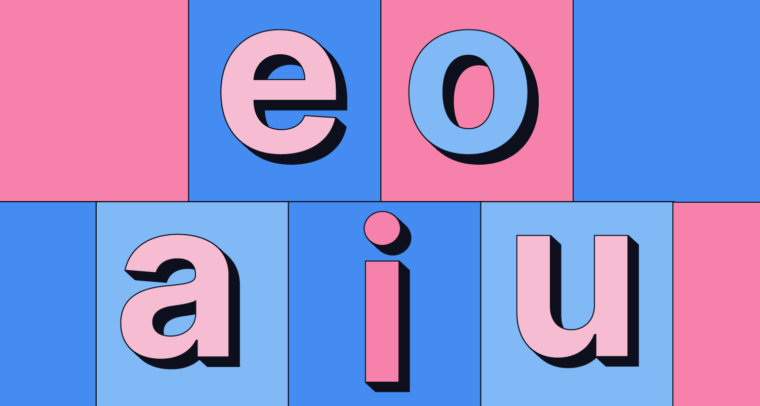 Even though they’re only a few letters, vowels are important in spelling, pronunciation, and grammar. Below we explain all the details and rules you need to know, but first let’s take a deeper look at this question: What are vowels?

So what are the vowels? The letters a, e, i, o, u—and sometimes y—are vowels. However, some consonants, like h, r, and w, can also make vowel sounds. In grammar, these letters are still considered consonants and don’t follow the vowel rules.

Vowels play a major role in both spelling and grammar. They also have a direct impact on how consonants are used, such as spelling words with double consonants. Consider the difference between hop and hope—which, as present participles, become hopping and hoping. The presence of the silent e at the end changes the rules for how to conjugate certain words.

When do you need a vowel?

Unlike consonants, every word needs at least one vowel. There are a small number of exceptions, which we explain below, but in general, this is the rule. In fact, the shortest words in the English language are one letter, and they’re both vowels: the article a and the pronoun I.

Even though there are only five (sometimes six) vowels in the alphabet, they can be combined in a variety of ways to change their sounds, which results in more than a dozen distinct vowel sounds in American English. Without getting too confusing, we can divide these vowel sounds into two categories: short vowels and long vowels.

Short vowels are the standard pronunciation of vowels—usually when there is only one vowel in the word—especially in short words.

These are the basics of vowel pronunciation, but they are also the most common examples. If you can master these vowel sounds, you can master most of the English words you’ll come across, and it will also help your spelling when you write.

When discussing consonants vs. vowels, the letter y causes a lot of confusion. Basically, y can be either a vowel or a consonant, depending on how it’s used.

When y is a consonant, it makes its own distinct sound using the rear of the tongue on the top of the mouth. Think of the pronunciation of words like these:

Unlike the other consonants, y counts as a vowel; some words only include a y and no other vowels.

What 5-letter word has the most vowels?

The 5-letter word with the most vowels is Iouea (with a capital i), which uses all the main vowels and no consonants. Iouea is the scientific name for a genus of extinct water sponges.

If you’re asking this question because of Wordle, try adieu, which is an English loan word of 5 letters that contains every vowel except o.

Assonance is a literary device that uses a series of words with the same vowel sounds. It is the vowel version of consonance, which repeats consonant sounds. Both assonance and consonance are common in works where sound is important, such as poetry, music lyrics, and creative writing. For example, look at this passage from Edgar Allan Poe’s poem “The Raven”:

And the silken, sad, uncertain rustling of each purple curtain

Thrilled me—filled me with fantastic terrors never felt before.

Words like silken, uncertain, and curtain use similar vowel sounds, as do the words terrors, never, and before.

Are there words with no vowels?

There are only a handful of words in English without any proper vowels, and they’re mostly loan words from Welsh. They use a rare vowel form of the letter w that is not usually accepted in English.

None of these words are common in everyday English, so we advise against using them in your own communication or writing (unless it’s directly related to Wales).

Vowels are letters representing a speech sound where air leaves the mouth without blockage. In English, the vowels are a, e, i, o, and u, although y can sometimes count as a vowel, too. Vowels are contrasted with consonants, which represent sounds where air is obstructed, such as the closing of the lips for b, m, and p.

What’s the difference between short and long vowels?

The same vowel can make different sounds, depending on whether it’s paired with another vowel. When vowels are used alone in a syllable, they make a short vowel sound, such as the i in big. When vowels are combined with another vowel, typically a silent vowel, they can make a long vowel sound that’s usually pronounced like the letter’s name, such as the ea in eat, which sounds like the name of the letter e.

The letter y can be either a vowel or a consonant, depending on how it’s used. When used as a consonant, such as in yellow or boy, it makes a unique sound using the tongue and the top of the mouth. When it’s used as a vowel, such as in my, system, or lady, it can make either a long i, short i, or long e sound.