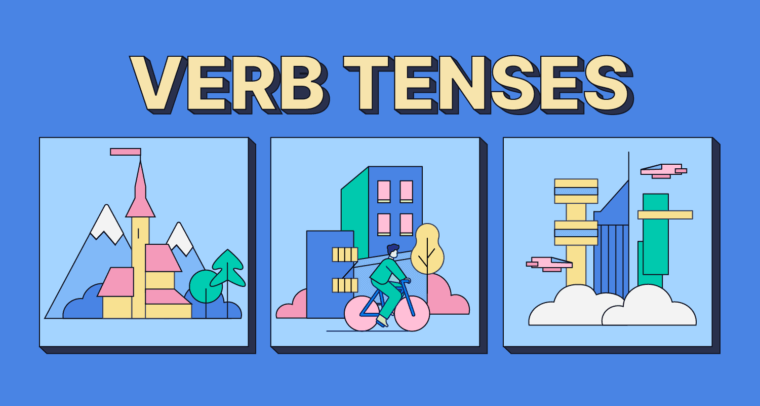 Verb tenses are changes or additions to verbs to show when the action took place: in the past, present, or future. The phrase verb tense is also used for grammatical aspects, which add more details about the duration or time an action takes. When you combine the four grammatical aspects with the past, present and future, you end up with twelve main verb tenses in English.

Verb tenses are essential for speaking English correctly, but with all the different forms and functions, they can get confusing. In this guide, we give a quick overview of the English tenses, including when to use them and how to make them, and give plenty of verb tense examples.

What is a verb tense?

Verb tenses show when an action took place, as well as how long it occurred. The main verb tenses are the past, present, and future.

There are also additional aspects that give extra details, such as the length of time the action occurred, which actions happened first, or whether a past action has an impact on the present. These grammatical aspects are the simple tense, perfect tense, continuous tense, and perfect continuous tense.

Verb tenses list: How many tenses are there in English?

The standard tense in English is the present tense, which is usually just the root form of the verb. The past and future tenses often require changes or additions to the root form, such as the suffix –ed for the past tense and the modal verb will for the future.

However, for each of the past, present, and future tenses, there are four different aspects that add additional details. For example, the continuous tense shows that an action is ongoing. It can be used in the present (she is sleeping), past (she was sleeping), or future (she will be sleeping).

Past, present, and future tenses

The simple tense is a grammatical aspect that refers to the normal forms of the past, present, and future tenses—nothing fancy! Unlike the other aspects, it doesn’t add any new information. True to its name, simple tenses are the easiest to form and have the fewest rules.

The definition of the perfect tense is a little more complicated. It’s used for actions that relate to other points in time, either completed or ongoing.

For example, in the sentence I have played soccer since I was a child, the perfect tense indicates that the action occurred continuously in the past and still happens in the present. By contrast, in the sentence I played soccer when I was a child, the simple past tense indicates that the action occurred only in the past, and has no relation to the present.

The perfect tenses use a conjugation of the auxiliary verb have with the past participle of the main verb.

We use the continuous tenses (also known as the progressive tenses) for ongoing actions or actions that happen a while before completion. For example, They are studying all night means the studying lasts many hours before it’s finished.

Please note that you usually do not use the continuous tense with stative verbs like want, love, have, and need.

The continuous tenses use a conjugation of the auxiliary verb be along with the main verb’s present participle, or –ing form.

We use the simple past to show actions completed in the past, with no extra emphasis.

For regular verbs, you form the simple past tense by adding the suffix –ed to the end of the verb (or just –d if the past tense verb already ends in an e).

Regular verbs: I picked up the glass, but it dropped from my hand.

Irregular verbs: This morning I went to the store, but I forgot the milk.

What if you’re talking about two different actions in the past and want to show that one happened before the other? The past perfect, also known as the pluperfect, shows that one past action happened earlier than another one.

She had arrived at the office before she realized it was Sunday.

I ran to my car when I noticed my wife had left already.

Use the past continuous to show an ongoing action in the past, especially if the action was interrupted by another action. It’s also used for habitual actions that occurred in the past but not in the present. It’s usually used with adverbs like always or adverb phrases like all the time.

My dog was whimpering in his sleep when the TV woke him up.

As kids, my friends and I were always getting into trouble.

The past perfect continuous tense is used just like the past perfect tense, except it describes ongoing actions that happened in the past instead of a one-time occurance. It’s often used with the words when, until, and before to connect it to another past action.

Before he got his first job as a writer, he had been working as a proofreader.

I had been living on my friend’s couch for a year until they kicked me out.

The simple present is the most basic of the English tenses. It’s used for individual actions or habitual actions in the present.

Often the simple present is just the root verb with no changes or additions. The main exception to this is when the subject is third person and singular. In this case you add the suffix –s. If the verb ends in o, ch, sh, th, ss, gh, or z, you add –es. If the verb ends in a consonant and y (and the subject is third-person singular), drop the y and add –ies.

My brother carries the groceries while my sister stays on the couch.

Although it’s quite common, the present perfect is one of the most difficult English verb tenses. It is used to describe a few different types of actions, including:

Additionally, the present perfect can be used to emphasize the significance of a completed action, especially one that happened over time.

We have tricked him every April Fool’s Day since we were kids.

My niece has grown so much this year!

Use the present continuous to show an action happening right now or in the near future.

I am reading The Hitchhiker’s Guide to the Galaxy for the fifth time!

We are eating pizza tonight.

The present perfect continuous shows an ongoing action in the present that was started in the past. It is often used to emphasize the length of time.

We have been waiting for over an hour!

The team has been practicing nonstop for the tournament.

Use the simple future for actions that have not happened yet but will later. To form the simple future, just place the modal verb will before the root form of the main verb. (Note that if the action will happen in the near future, you can use the present continuous instead.)

She will be president one day.

I will not go to the wedding without a date!

By the time you read this, I will have already left.

She will have eaten lunch before her sister even wakes up.

By this time tomorrow, I will be drinking margaritas on the beach.

We will be attending a meeting from noon until 3 p.m.

In ten minutes, my parents will have been waiting in traffic for four hours.

I will have been eating healthy for a whole year by September.

What are verb tenses?

Verb tenses are changes or additions to verbs to show when the action took place: in the past, present, or future. The phrase verb tense is also used for grammatical aspects, which show how long an action occurs.

What are the different types of verb tenses?

The three main verb tenses are the past, present, and future, but there are also four grammatical aspects: simple, continuous, perfect, and perfect continuous. When you combine the three time periods with the four aspects, you get twelve unique verb tenses.

What are some examples of the different verb tenses?