Italics and Underlining: Titles of Works 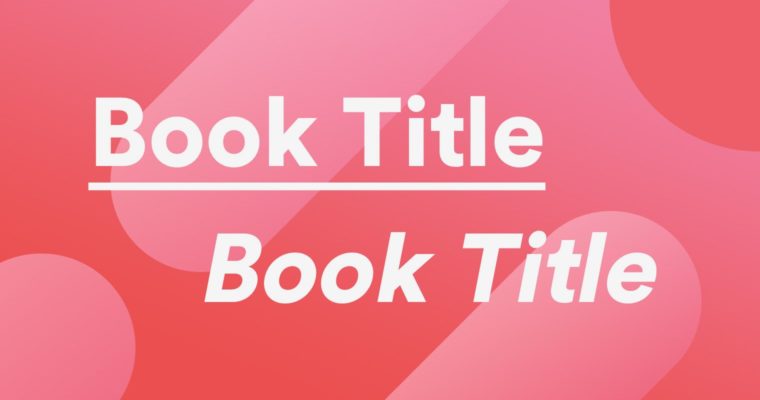 There was a time when we didn’t have extensive formatting options for typed documents. Today, writers use underlining, italics, bold text, and quotation marks to emphasize certain words. The words that often get emphasized are names of ships or planes, words used as themselves, foreign words, and titles of books, movies, songs, and other titled works.

The first poem in the book is called “Athena’s Birth.”
Here’s an anthology: find the story called “The Sky and the Sea.”

Have you read To Kill a Mockingbird?
Her dissertation is titled Feminism in Shakespeare’s Tragedies.

Titles of full works like books or newspapers should be italicized.

Titles of short works like poems, articles, short stories, or chapters should be put in quotation marks.

Titles of books that form a larger body of work may be put in quotation marks if the name of the book series is italicized.

How to Emphasize Book Titles

The way you format titles isn’t really governed by grammar rules. It’s a matter of style. If you want to, you can emphasize whatever you want, however you want—but that could make your writing nearly unreadable. Consistency is also very important for emphasis, which is why businesses, institutions, and publications look to style guides.

Book titles are usually put in the same category as other big, standalone, or complete bodies of work like newspapers, symphonies, or publications. Style guides that prescribe the use of italics, such as The Chicago Manual of Style or the AMA Manual of Style, say that titles of such works should be put into italics when appearing in text.

Some writers still use underlining if italicizing is not an option, but generally it’s considered outdated. You should also note that these guidelines apply to titles that appear in a text and are surrounded by other words. Titles at the top of the page or on the front cover don’t require italics or underlining. Their separation from the rest of the text is already enough to get the reader’s attention. You don’t have to italicize the title of your thesis, for example, when it appears on the cover.

How to Emphasize Titles of Smaller Pieces of Work

Let’s say you want to write the title of an article or book chapter. Should you italicize it? For shorter pieces of work or works that don’t stand alone but are part of a greater whole, you should use quotation marks. See the examples below:

Did you read that newspaper article “Shark Eats Man”?
One of Robert Frost’s most famous poems is “Mending Wall.”

Cathy’s favorite book is Who Has Seen the Wind?
Have you been to the theater to see Romeo and Juliet?

The rules for emphasizing titles may seem straightforward, but there are exceptions. What happens if you have more than one title, for instance? If you have, say, a collection of novels in one book (let’s take, for example, all three Lord of the Rings books in one handy paperback), the title of the collection would be italicized or underlined, and the titles of the three books would then be put in quotation marks.

Lord of the Rings is a very large book. I made it through “The Fellowship of the Ring” and “The Two Towers,” but I was dying of boredom by the time I got to “The Return of the King.”

If you have two titles in one sentence (for example, a book title and a chapter title), the title of the larger work should be italicized, and the smaller work should be in quotation marks. See the example below:

In Little Women, Beth March dies in Chapter 40, “The Valley of the Shadow.”

You would also do this with episodes from TV shows:

My favorite Seinfeld episode is “The Puffy Shirt.”

Up for some exercise? See if you can emphasize the titles in the following sentences!

I read The Lion, the Witch and the Wardrobe over the summer.

Have you read Humble Origins to Classic Footwear, Espadrilles Endure on the Newsweek website?

Is Paradise Lost a poem?

The final part of Lord of the Rings, The Return of the King, was my favorite.

You only get so much information about Harry from reading A Boy Who Lived.

A Boy Who Lived is the first chapter of the book Harry Potter and the Philosopher’s Stone.