The Basics on Subject and Object Pronouns 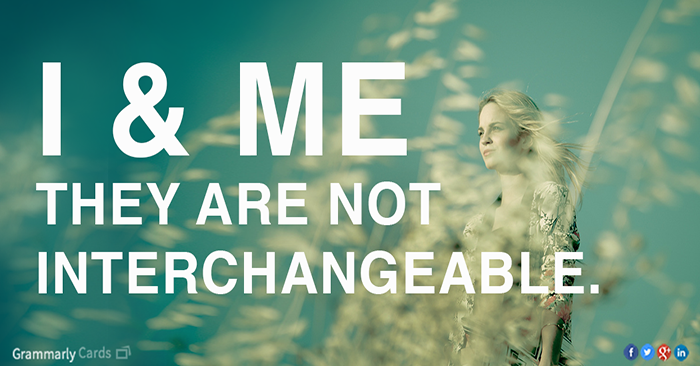 Odds are good that the words “subjective and objective cases” mean nothing to you. “Case” is grammarian and linguistic jargon for categories of nouns based on the function of the noun in relation to the verbs and prepositions in a sentence.

Here’s a tip: Want to make sure your writing always looks great? Grammarly can save you from misspellings, grammatical and punctuation mistakes, and other writing issues on all your favorite websites.
It is even more confusing in English language because many cases have disappeared. Modern Ukrainian language has seven cases. Finnish has fifteen cases. Even German, from the same language family, has four. English has three, which is about as simple as it gets linguistically. Presently, English cases are rarely taught because most native speakers are expected to develop intuitively a “feel” for the correct case usage.

However, many people still make mistakes, and the lack of educational reinforcement ends up making the confusion worse. This article will be focusing on two cases—subject (nominative) and object, in particular with first-person pronouns. If you’ve ever wondered about I vs. me, he vs. him, she vs. her, we vs. us, or they vs. them, read on.

The first thing that must be understood is that I and me are not the same. They are not synonyms. They are not interchangeable. Why? They are different cases.

Subject pronouns are those pronouns that perform the action in a sentence. They are I, you, he, she, we, they, and who. Any noun performing the main action in the sentence, like these pronouns, is a subject and is categorized as subjective case (nominative case). English grammar requires that the subject come before the verb in a sentence (except in questions).

In this sentence, “I” is the actor (subject pronoun) performing the action of making (verb). To check for correct case, you should be able to replace I with any other subject pronoun, modify the verb according to person and number, and have a clear sentence. In a simple declarative sentence like this, it may seem unnecessary, but checking case this way is a good habit for when you are checking more complicated sentences. Remember that subject nouns absolutely always are the actors in sentences. If action is implied, you should use subject nouns.

Object pronouns are those pronouns that receive the action in a sentence. They are me, you, him, her, us, them, and whom. Any noun receiving an action in the sentence, like these pronouns, is an object and is categorized as objective case.* An object pronoun can also be used after prepositions, i.e. “I will go with him.” In this article, we will only focus on nouns as recipients as these are the most frequently confused. With few exceptions, English grammar requires that objects follow the verb in a sentence.

In this sentence, “I” is the actor (subject pronoun) performing the action of making (verb). “Them” is the noun receiving the giving; it is the object. You wouldn’t ever use a subject noun after “give” here. To most native speakers and even English learners, the following incorrect sentence should grate on the ears:

Can you spot the problem? “I”—just like “they”—is a subject noun living in an object noun’s place. The correct sentence should have “me” (the object pronoun) following the verb:

To check for correct case, you should be able to replace me with any other object pronoun and have a clear sentence. Remember that object nouns always are the recipients in sentences. If an action is happening to a noun, you should use object nouns.

But there are a couple of ways to make this easy.

First, don’t mix cases. Both of the pronouns will be in either the subjective or objective case.

She and I went to the movies.
If you have any questions, you can ask either her or me.
She and me are old friends.

Second, to decide whether to use subjective or objective case, try removing one of the pronouns from the sentence.

Test Sentences Mark the following sentences as correct or incorrect. If the sentence is incorrect, write the correct form.

1) Martha and Jim are in the office. 2) She is telling him a joke. 3) Jim made a copy of the report for Lucy and I. 4) I have to go. Mark is calling for Lucy and me. 5) Our co-workers love Martha’s cookies. 6) Jim and me are planning a surprise for Sue’s birthday. 7) We will give them extra cookies next week. 8) Who did you give the money to?

How do you remember to use subject and object pronouns correctly? How did you do on the test sentences?

*There are two degrees of objective case that receive actions—direct and indirect, which correspond to accusative and dative cases roughly.