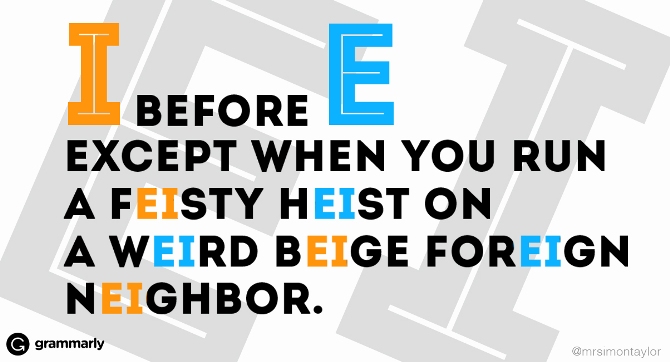 Anyone who has ever had to memorize a tough-to-spell English word (It’s fuchsia, right? Or is it fuschia? Fushia?) has noticed that the spelling of some words is wildly different from the way we pronounce them. To make matters worse, some words are spelled differently in American English and British English. If it makes you feel any better, the eccentricities of English spelling weren’t invented just to make life difficult for writers.

Around Shakespeare’s time, when spelling was first becoming standardized, the spelling of most English words was mostly phonetic—or at least more phonetic than it is today. For example, English speakers did once pronounce the k at the beginning of words like knife and knee. But even though no one has pronounced knee as “kuh-nee” in centuries, we still hang on to the old spelling.

Fortunately, there are a few rules of thumb that can help when you’re faced with a word you’re not sure how to spell.

Spelling Rule 1: I Before E, Except After C

I before E, Except after C, unless it sounds like A, as in neighbor or weigh

There are many exceptions to this rule—maybe it’s better to think of it as a guideline—but it can be helpful with words like the ones below.

Would you like a piece of cake? Jerry will believe anything. They’re planting new grass on the football field .

Darnell received an A on his spelling test. Jeremy spotted a spider on the ceiling . I never expected such deceit from you!

Our neighbors live in a beige house. How much does the kitten weigh ?
Here’s a tip: It’s a good idea to memorize these common exceptions to the rule:

Spelling Rule 2: Adding Suffixes to Words that End in Y

When you add a suffix that starts with E (such as -ed, -er, or -est) to a word that ends in Y, the Y usually changes to an I.

This is the dustiest old house I’ve ever seen. The best bakers make the flakiest pie crusts. The soup needs the tiniest pinch of salt, and then it’s perfect. Seawater dries out your skin.

The Y doesn’t change for the suffix -ing.

The baby has been crying for almost an hour. The minute we brought in the new puppy, our mother began laying down sheets of newspaper. We should spend some time tidying before the guests arrive.

If the word in question has two consonants before the Y, change the Y to I before adding the suffix ‑ly.

Of course, there are always exceptions:

Typically, an E after a consonant at the end of a word is silent, but it does affect the way you pronounce the vowel that comes before the consonant. The E makes the vowel sound of the word (or syllable) long (like the I sound in kite) instead of short (like the I sound in kitten). It’s important to get the silent E right, because its presence or absence can change the meaning of a word.

The monkey bit me. Keep your fingers out of the cage: the monkeys bite .
By adding the E to the end of bit, the word is changed from past to present tense.
Don’t cut yourself on the sharp knives. The kitten is really cute .
In this case, the silent E creates a completely different word.

When adding a suffix like -ed, -er or -est, the silent E is usually dropped from the end of the root word.

The dog bared his teeth at the mail carrier. The baby’s eyes were the bluest I’d ever seen.

Watch out for double consonants. It can be difficult to hear them when a word is said aloud—especially if the word has only one syllable. Double consonants are frequently found in words that have suffixes added to them:

I dropped the heavy bags to the floor. Someone called for you earlier.

Some words can be pronounced as either one or two syllables, but the spelling remains the same:

Be particularly careful with words where a double consonant can change the pronunciation and the meaning of the word.

Cacti are native to the desert . Would you like ice cream for dessert ?

I only had to take one bus; you had to take two buses. I only get one wish; you get two wishes. I have a splotch on my shirt; you have two splotches. I’m carrying one box; you’re carrying two boxes. Would you like a spritz of perfume? Two spritzes, please.

For all other endings, add ‑s.

Be careful of words that don’t change when they’re pluralized (e.g., fish, sheep, moose). If you’re unsure, check the dictionary.

Be sure to also check out this list of commonly confused words to help you choose the right spelling of words with similar meanings and pronunciations.