What Are Pronouns? Definitions and Examples 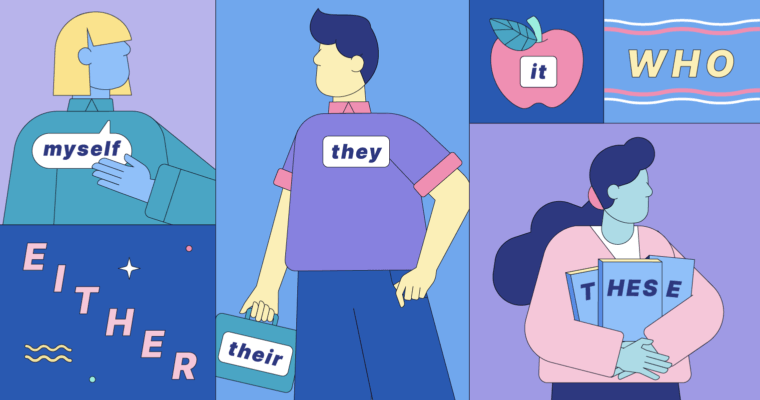 ​​You use pronouns every day. In fact, even if you don’t know what pronouns are, you use them—and in this sentence alone, we’ve now used pronouns four times.

Pronouns do a whole lot more than turn phrases into sentences. They provide context, make your sentences’ meanings clearer, and shape how we perceive people and things. Read on to learn about the different ways we use pronouns and how to use them to construct sentences.

What is a pronoun?

Pronouns are short words we swap in for other nouns to make our writing and speech faster and more varied. They’re words like:

Pronouns make up a small subcategory of nouns. The distinguishing characteristic of pronouns is that they can be substituted for other nouns. For instance, if you’re telling a story about your sister Sarah, the story will begin to sound repetitive if you keep repeating “Sarah” over and over again. For example:

You could try to mix it up by sometimes referring to Sarah as “my sister,” but then it sounds like you’re referring to two different people:

Instead, you can use the pronouns she and her to refer to Sarah:

Pronouns can replace both proper and common nouns. Certain pronouns have specific rules about when they can be used, such as how it should never be used to refer to a human being. We explain all of the different types and their associated rules below.

Here are a few examples of personal pronouns in italics, with the nouns they’re referring to bolded:

In the second example sentence, notice that nachos (a noun) and them (a pronoun) aren’t emphasized. That’s because in this sentence, them isn’t a personal pronoun because it isn’t replacing a proper noun, but rather we is.

Remember how we mentioned that in order to use a pronoun, you need to introduce the noun first? That noun has a name: an antecedent.

Antecedents are necessary because pronouns are versatile. Think about it—“it” can refer to a bike, a tree, a car, or a city, and we just used it to refer to something else entirely: pronouns’ versatility. Take a look at these examples to see how antecedents and pronouns work together:

Antecedents aren’t necessary when the reader/listener knows who or what you’re discussing. Generally, you don’t need an antecedent for pronouns like I, you, we, our, and me. But because there are no absolutes in grammar, sometimes you do need an antecedent in this kind of situation—like when you’re giving a speech where you introduce yourself and your credentials before discussing your achievements.

There are also circumstances where you might not introduce the noun first and instead reveal it after using only pronouns to refer to your subject. You might do this for dramatic or poetic effect in a piece of creative writing.

Relative pronouns are another class of pronouns. They connect relative clauses to independent clauses. Often, they introduce additional information about something mentioned in the sentence. Relative pronouns include these words:

Traditionally, who refers to people, and which and that refer to animals or things. Here are a few examples of relative pronouns at work:

Who vs. whom—subject and object pronouns

See the difference? Who is a subject pronoun. It’s in the same category as I, he, she, they, and we. Whom is an object pronoun, which puts it in the same category as me, him, her, them, and us. An easy way to determine whether you should use who or whom in a sentence is to answer the sentence’s question by substituting another pronoun. With the new pronoun in place, determine if the sentence still makes sense. For example:

That, this, these, and those are demonstrative pronouns. They take the place of a noun or noun phrase that has already been mentioned or is clear through context, either in written or verbal communication.

Here are a few examples of indefinite pronouns in sentences:

When indefinite pronouns function as subjects of a sentence or clause, they usually take singular verbs.

Reflexive pronouns end in -self or -selves:

Use a reflexive pronoun when both the subject and object of a verb refer to the same person or thing. Here are a few examples:

Using myself when you mean me is a common mistake writers and speakers make. Reflexive pronouns are only correct when the subject and object of a sentence are the same.

If you can remove a pronoun from a sentence and it loses emphasis but its meaning stays the same, it’s most likely an intensive pronoun. Compare these two sentences:

See how the second one emphasizes that the builder had no outside help? Intensive pronouns can help you express pride, shock, disbelief, credulousness (or incredulousness), or any other strong emotion. Here are a few more examples:

Possessive pronouns are pronouns that show possession. They include the following:

This category also includes independent versions of possessive pronouns. These include:

When you use an independent possessive pronoun, you drop the noun it’s referring to. Here are a few examples:

There are only two reciprocal pronouns:

These pronouns refer to two or more people who are both the subject of the sentence. Take a look at these examples:

Here are a few examples of distributive pronouns in sentences:

As you can see, pronouns do a lot. And there are a lot of them. And to make them even more complicated, many pronouns change forms when they’re used in different positions within a sentence or different tenses.

Take a look at the different types of pronouns and their forms at a glance:

You might have noticed pronouns listed in some of your colleagues’ and friends’ email signatures or social media profiles. You might have even been prompted to list your pronouns in your own. While traditionally the personal pronouns he/him/his and she/her/hers were used for individuals based strictly on their sex, pronoun usage is broader and more descriptive today.

Many people use gender-neutral language like they/them/theirs and zie/hir/hirs because they feel these pronouns express their gender identity more accurately than she or he. The most common gender-neutral pronoun is the singular they. Today, it’s not uncommon to see the singular they as the default neutral pronoun. It’s what we use on the Grammarly blog, and for writers across the internet, it’s a concise catch-all pronoun that can fit just about any sentence. However, language is constantly evolving, and new types of singular third-person pronouns have emerged that refer to people entirely without reference to gender, such as noun-self pronouns.

>>Read More: A Guide to Personal Pronouns and How They’ve Evolved

When somebody tells you their pronouns, using their pronouns is an act of respect. Think of it like spelling or pronouncing that person’s name correctly—they’re the authority on who they are and how they express themselves, and referring to them the way they’ve asked you to refer to them affirms this.

If you ever aren’t sure of the correct pronouns to use when referring to somebody, just ask them! And if you accidentally use the wrong pronoun, simply apologize for doing so and make an effort to use the correct pronoun in future conversations.

Writing is like completing a puzzle, and pronouns are important pieces of that puzzle. After you’ve written your first draft, Grammarly’s writing suggestions catch mistakes you might have made (with pronouns or any other part of speech) and help you get your tone just right, so your writing communicates your message exactly how you intend.

This article was originally written in 2016. It’s been updated to include new information.