What Are Prefixes in English? Definition and Examples 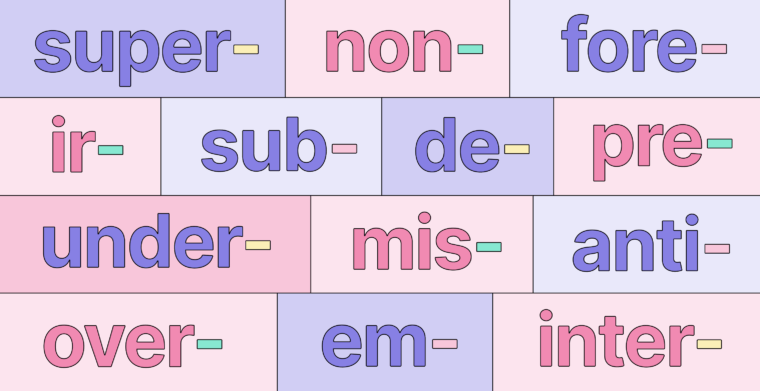 Prefixes are one- to three-syllable affixes added to the beginning of a base word to slightly change its meaning. For example, adding the prefix im- to the base word possible creates a new word, impossible, which means “not possible.”

Prefixes are a regular part of English, and understanding them can greatly improve your vocabulary and reading comprehension. In this quick guide, we explain everything you need to know about prefixes and give plenty of examples of prefixes in English. But first, let’s talk a little about what prefix means.

In English, the most common prefixes and suffixes are usually one or two syllables long, although some, like hetero- and megalo-, are three.

Prefixes always have the same meaning no matter what base word they’re attached to. For example, the prefix re- always means “to do something again”: when used in reread, it means “to read again”; when it’s used in rebuild, it means “to build again.”

When to use prefixes

Prefixes are used mainly to shorten phrases into a single word. For example, instead of saying that someone is “achieving more than expected,” you can say simply that they’re “overachieving,” thanks to the prefix over-. In writing, prefixes are one of the best ways to streamline text and make it more potent.

Just be careful using prefixed words with a negative that you don’t create a double negative. Some prefixes, like a-, in-, or un-, are already negative. That means if you say “not unnecessary,” the two negatives cancel each other out, and the meaning is simply “necessary.”

Use a hyphen with the prefixes all-, ex– (former), and self–

The prefixes all-, ex-, and self- use a hyphen.

However, be careful with ex- because it has two different meanings—“out from,” and “in the past.” Use a hyphen only when the meaning of ex- is “former” or “in the past.”

Use a hyphen for prefixes with a proper noun

If you’re using a prefix with proper nouns, always use a hyphen.

The only exception is transatlantic, a unique word that does not follow the rules of proper nouns.

Use a hyphen if adding the prefix spells a different word

Some words with prefixes, especially re-, are easily confused with other, preexisting words that happen to start with the same letters. If adding a prefix to a word creates a word that already exists, use a hyphen to clear up the ambiguity.

After she recovers from the flu, the gardener needs to re-cover the flower beds.

Use a hyphen to avoid putting the same vowels together

Most of the time, if the last letter of a prefix and the first letter of the base word are the same vowel, you use a hyphen.

However, keep in mind this rule has exceptions. In particular, some prefixed words with pairs of o and e do not require a hyphen.

When a prefix is added to a word that starts with a different vowel, you do not usually use a hyphen.

Remembering which prefixed words use hyphens is confusing even for English experts. If you’re unsure, feel free to use a grammar checker.

Examples of prefixes in English

including everything or completely

relating to stars or outer space

life or relating to life

opposition, often as a reaction

down or away from

moving from higher to lower

former or in the past

before or at the front

relating to the earth

in the back or behind

excessive, above, or over

on the inside, within

more than one, many

new iteration of something

not standard or away from

in the immediate vicinity

surpassing or going outside the normal

excessive or going above

below or from a lower position

crossing or going beyond

negation or the absence of

moving away from or resisting

Prefixes are short one- to three-syllable additions that are attached to the beginnings of words to slightly change their meaning. For example, adding the prefix tri- to the base word angle creates a new word, triangle, which means “a figure with three straight lines and three angles.”

How do prefixes work?

Prefixes generally mean the same thing no matter what word they belong to. For example, the prefixes syn- and -sym mean “to do something together”: When syn- is added to thesis, it makes synthesis, a “combination of ideas to form a theory or system.” When sym- is added to phony, it makes symphony, meaning “music intended for a full orchestra.”

When should you use prefixes?

Prefixes help you use fewer words when communicating. For example, instead of saying that someone is “doing something over and over again,” you can say simply that they’re repeating, thanks to the prefix re-, which means “to do something again.”