Per Our Conversation: 5 New Ways to Say This Traditional Phrase 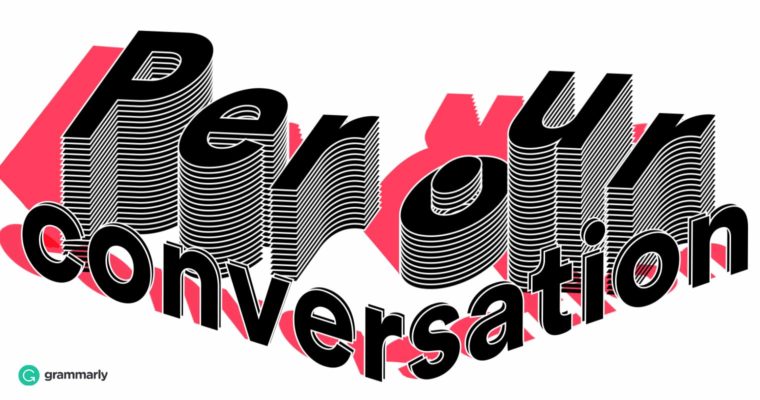 No one wants to be known as the king or queen of boring conversations. One way to prevent tedium is to avoid predictable speech patterns. Are you guilty of overusing “per our conversation?” Grab your listener’s attention with five fresh variations!

If you want to give credit for an idea

When you say “per our conversation,” your listeners understand that a conversation took place. But who said what? If you insert the name of the speakers, you minimize the possibility of confusion. “As mentioned” allows you to specify the speaker. Here are a couple of examples:

As I mentioned, the meeting on Sunday will cover the five principles of effective communication.
As the contractors mentioned, the tile in the bathroom is in dire need of repair.
Here’s a tip: Want to make sure your writing shines? Grammarly can check your spelling and save you from grammar and punctuation mistakes. It even proofreads your text, so your work is extra polished wherever you write.
Of course, you can use “as mentioned” without pointing out the speaker if keeping track of conversants isn’t your goal.
As mentioned at the board meeting, Gary Schlepper will be responsible for providing the snacks for our annual company picnic.

If you want to give a reminder

Often, the motive behind a “per our conversation” email is to remind others of something they said they would do. The best phrase for the job is “as agreed.” If you made a contract, this expression is especially useful for reminding different parties of their obligations.

As agreed, your company is expected to deliver the tables and chairs to the venue before 8 a.m.
As agreed, the contract revision period will end on July 5, 2018. We will not consider requests after this date.

To explain the results of a conversation

“That changes everything!” Have you ever made that exclamation after a conversation reveals surprising information? “Following our conversation” is a handy phrase to show the effect of new details. Take a look at these examples published online:

Thank you again for the interview on Wednesday. I am very excited about this position and your company. Following our conversation, I realized there were two more things I wanted to tell you that time didn’t permit us to cover.
Following our conversation, the superintendent recommended to the Board of Education that I be appointed principal of that school and the Board approved his recommendation.
Dorwin Llewelldyn Howard, Sr.,

If the above examples seem too formal, you can easily replace “conversation” with a more casual term such as “chat,” “talk,” or even “convo.” However, in a legal context, you may encounter an even more formal way to say “following our conversation.”

4 Pursuant to our conversation/in pursuance of

Do pursuant and pursuance remind you of a verb? If you said pursue, you have found a clue to understanding these terms. Pursuant means “in accordance with” and pursuance refers to the execution or carrying out of something. “Pursuant to” and “in pursuance of” our conversation are used when an action follows as a result of a discussion. Notice the following example:

Pursuant to our conversation, I have enclosed for your review a rough sketch of the dress design. If the design meets your approval, please return the sketch and down payment for your garment in the envelope provided.

Note: According to the Entrepreneur’s Guide to Writing Business Plans and Proposals, these two phrases are too formal for nonlegal correspondence. In a section on clichés, K. Dennis Chambers challenges “pursuant to our conversation”: “Would you ever say that in real life? Would you sit down with a colleague over coffee and say, ‘Hey, Joshua, pursuant to our last conversation . . . ?’” Most people wouldn’t. If you are an exception, you might want to risk trying these two controversial options for the sake of variety.

Summarizing a conversation is an essential practice if you want to create a record for reference or to make sure that both parties understand each other. In this case, the simple “according to” is the most appropriate phrase to recap a conversation.

According to our conversation, the following updates will go live on Thursday, April 11:

Did I miss anything?

According to our conversation, articles will be due at midnight until further notice.

Here’s another reason to avoid using “per our conversation.” The Handbook of Technical Writing classifies the word “per” as jargon when it’s used to mean “according to.” What do you say? Will you freshen up your vocabulary with one of these five fresh phrases today?