How to Create Parenthetical Citations 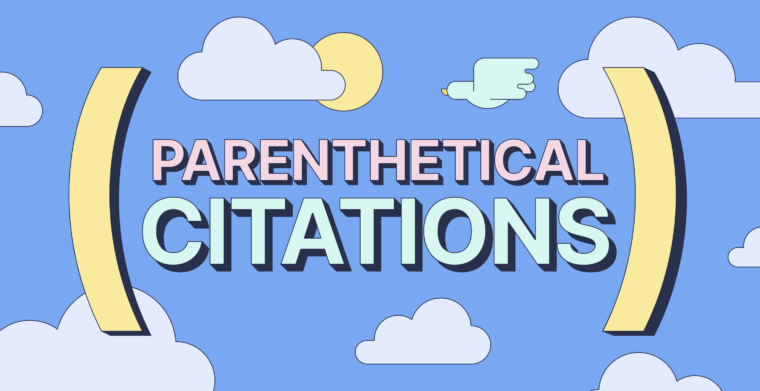 What is a parenthetical citation?

Parenthetical citations are any citations set in parentheses (like this). In academic writing, they’re used to share a source’s details directly in the text, so the reader doesn’t have to go to the footnotes or works cited page to find the original work.

The formatting and content of each citation vary, depending on the requirements of the style guide. We explain each style’s preferences below, but to save time, you can also use a citation generator or other citation tools. For example, our Grammarly auto-citations feature corrects parenthetical citations with a quick click, or it creates originals from compatible website sources.

When should you use an in-text parenthetical citation?

In-text parenthetical citations are a requirement if you’re using the APA or MLA formats.

If you’re using Chicago, you have a choice between parenthetical citations (the “author-date” format) and the notes format, which uses footnotes and endnotes. According to Chicago, parenthetical citations are preferred for the sciences, including the social sciences, whereas notes are better for topics relating to history, literature, or the arts.

What’s the difference between parenthetical citations and narrative citations?

In narrative citations, you mention the source author, work, or page number directly in the text:

As Freud (1930) put it, “under the pressure [. . .] of suffering, men are accustomed to moderate their claims to happiness.”

Because the author’s name is mentioned, it’s redundant to mention it a second time in the parenthetical citation.

In the Chicago style, in-text parenthetical citations are optional. They’re required only if you choose to use the author-date system of citations instead of the notes system.

The Chicago style’s format for parenthetical citations is to list the author’s last name and the year of publication in parentheses, with no other punctuation. If you’re referring to a specific passage, you can also add page numbers (or a time stamp for other media), separated by a comma.

If the main author of a source is an editor or translator, use only their name without abbreviations like ed. For sources with no listed author, use a short form of the title.

All sources must have a corresponding full citation in the references list (similar to a works cited page) at the end of the work.

There is no evidence to suggest there is currently life on Mars (Thompson 2018).

Even though the tests were conclusive (Richardson, Hacker, and Backhurst 2002, 76–77), research continues to this day.

According to Pratchett, “[Ambition] was something that happened to other people” (1989, 62).

In-text parenthetical citations are required for the APA format. Just like Chicago, the APA format uses an author-date style, although the author and year of publication are separated by a comma. Locations to specific passages are also used when applicable, with a comma and the appropriate abbreviation: p. for page, pp. for pages, and paras. for paragraphs.

One or two authors can be listed using an ampersand (&), but three or more authors use et al. after the first listed author. If no author is listed, use the title instead.

Just like Chicago, if the parenthetical citation comes at the end of a sentence in quotation marks, the citation goes outside the quotes, followed by the period.

Again, all sources must have a corresponding full citation in the references list.

There is no evidence to suggest there is currently life on Mars (Thompson, 2018).

The MLA format also prefers in-text parenthetical citations, like the APA format. However, unlike the previous two style guides, MLA does not require the publication year. Only the author’s last name is necessary, although page numbers and other locations are also recommended if applicable, without a comma.

Abbreviations are not necessary for page numbers, but use them for chapters (ch.) and scenes (sc.).

Again, place parenthetical citations outside the quotation marks, followed by the period.

As always, all sources must have a corresponding full citation in the works cited page.

There is no evidence to suggest there is currently life on Mars (Thompson).

Even though the tests were conclusive (Richardson et al. 76–77), research continues to this day.

According to Pratchett, “[Ambition] was something that happened to other people” (62).

What are parenthetical citations?

When should parenthetical citations be used?

What’s the difference between parenthetical citations and narrative citations?