Opossum vs. Possum—What’s the Difference? 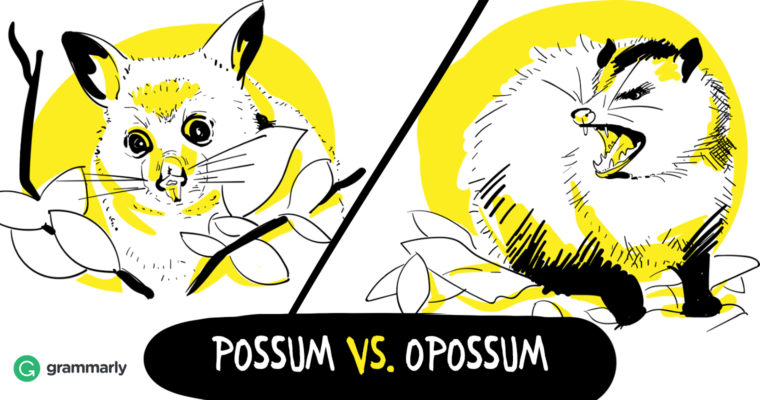 What are opossums and possums?

Both animals are marsupials, however possums are more closely related to kangaroos. But here’s where it gets confusing: in North America, people often shorten opossum to possum when talking about the creatures prowling around the backyard at night.

One news source described an animal that you might see “wobbling across your yard at night” or “scurrying down the pavement with a batch of babies clutching onto its back.” What is the name of this beast? Without hesitation, you might exclaim “An opossum!” However, another person might call it a possum. Is there a difference between an opossum and a possum? Yes, there is. They are entirely different animals. 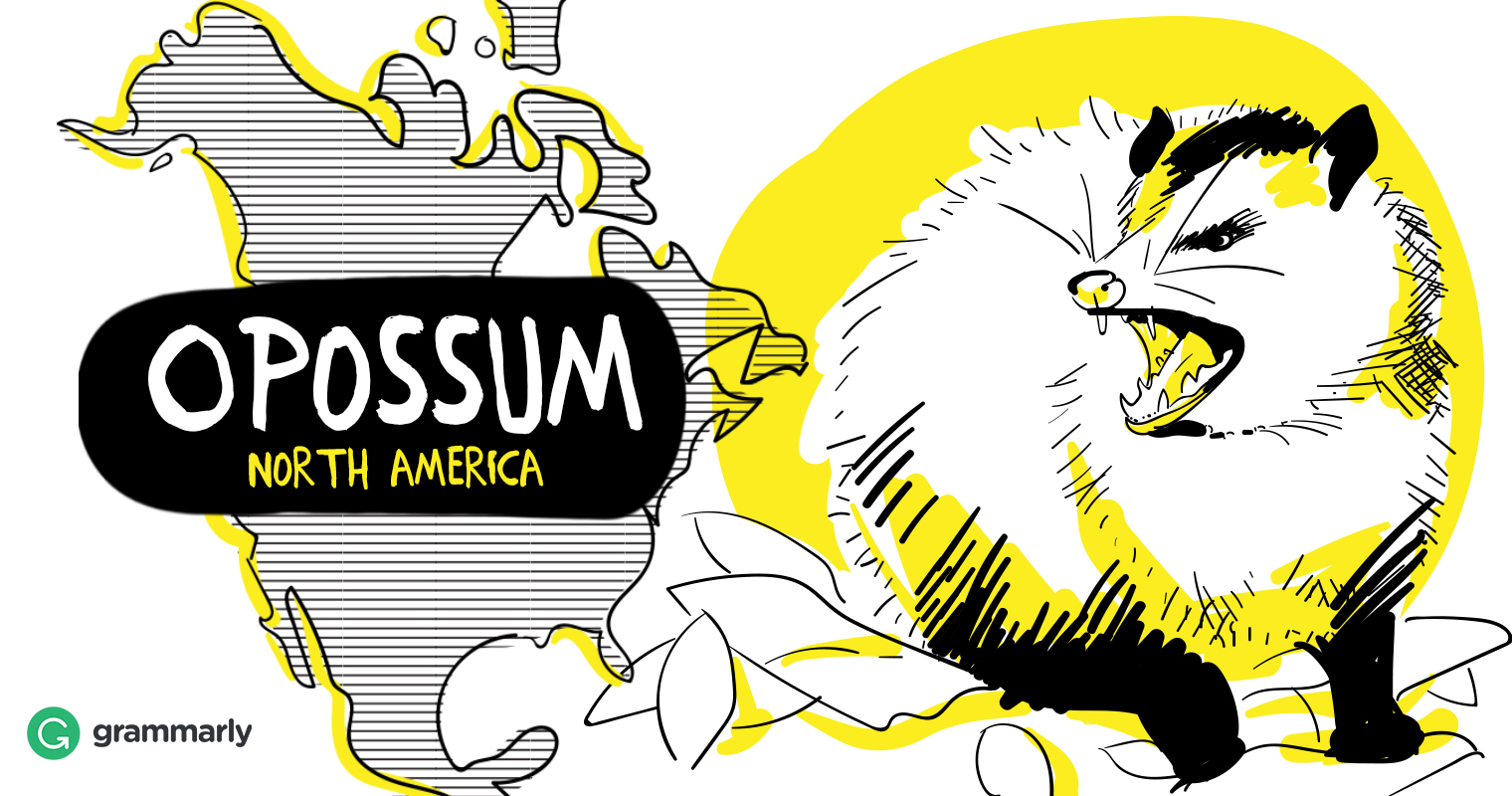 In North America, the animal officially called an opossum is a white and gray marsupial of the order Didelphimorphia. English colonists living in Jamestown derived the word from its equivalent in Powhatan, a language spoken by the Virginia Algonquian tribe. Literally, the word means “white dog or beast” in Powhatan. John Smith spelled it “opassum,” but William Strachey spelled it “aposoum.” 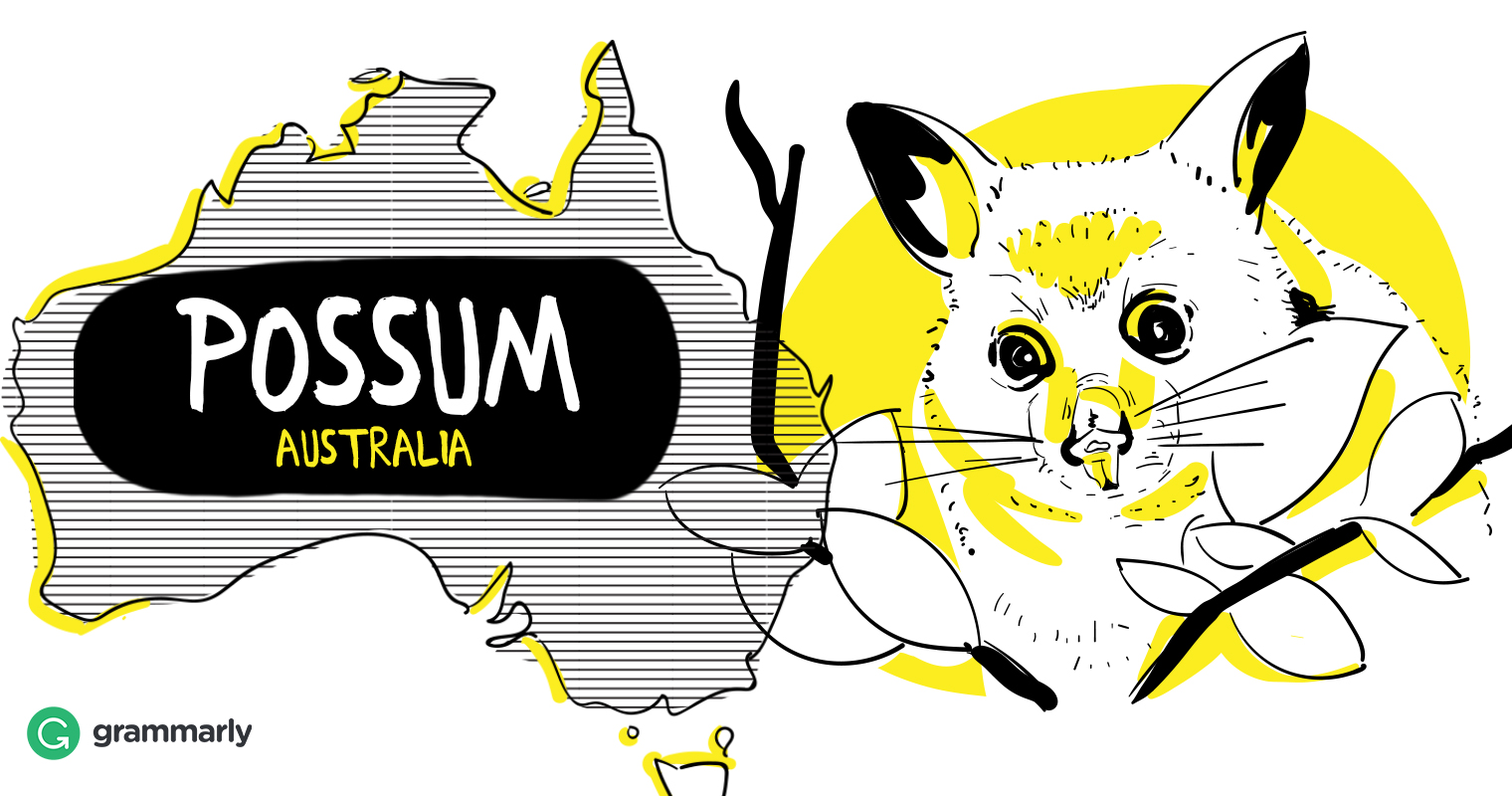 Possums, on the other hand, live in Australia, New Guinea, Sulawesi, New Zealand, and China. Their name does derive from opossum. Sir Joseph Banks, a British botanist, thought they looked enough like the American opossum to give them a similar name. However, kangaroos and other Australian marsupials are closer relations than American opossums. Possums belong to the Diprotodontia order.

When to use opossum?

In general, you can use opossum when referring to the American marsupial. Notice how some authors capitalized on the traits of this interesting creature in the following quotes. The first one is from Life of Pi by Yann Martel. You know he is talking about the opossum of North America because he makes reference to its unique tendency to faint as if dead when threatened:

Already your lungs have flown away like a bird and your guts have slithered away like a snake. Now your tongue drops dead like an opossum, while your jaw begins to gallop on the spot.

Another author, Amy Rowland, makes reference to the grayish-white color of the opossum. (Possums are brown.) This quote is from The Transcriptionist.

In a book about her life with her late husband Steve Irwin, Terri Irwin talks about her view of opossums.

I’ve always liked possums. Like a lot of wildlife, they are completely misunderstood. Virginia opossums are the only North American marsupials.

Wait a minute, did you notice that she used possums and opossums in the same paragraph? Terri is an American, but she owns a zoo in Queensland, Australia. To which animal is she referring? From context, you can conclude that it’s “the only North American marsupial.” In fact, it is quite common for people to drop the o of opossum in speech and in print. Let’s look at some examples. You will see possum written in two ways. Tina Fey, author of Bossypants, uses the term possum. Once again, we can use context clues (torpor) to guess that it is the North American variety. On the other hand, Bill Watterson makes it clear that he is dropping the o of opossum by adding an apostrophe in its place. In another quote from Terri Irwin, context clues suggest that this time she is talking about the Australian possum species.

“Blorft” is an adjective I just made up that means ”Completely overwhelmed but proceeding as if everything is fine and reacting to the stress with the torpor of a possum.” I have been blorft every day for the past seven years.
—Tina Fey, Bossypants
Hey Susie Derkins, is that your face, or is a ‘possum stuck in your collar?
— Bill Watterson, Calvin and Hobbes
“We had snakes and goannas mostly, but also orphaned roo joeys, sugar gliders, and possums,” Steve said about these humble beginnings.
—Terri Irwin, Steve & Me

How do you spell and pronounce possum

Garner’s Modern American Usage points out that possum, pronounced poss-uhm, is actually the more common of the two spellings for North Americans.

Opossum, pronounced uh-poss-uhm, is still favored for formal writing. Does this cause confusion? It depends on the audience and the writer or speaker. For instance, most would assume that an Australian saying “possum” is referring to the animal that lives in his native country. However, if an American says “possum” to an Australian, it might be unclear which animal is the subject of discussion. Remember that both possum and opossum only have one p. The most common error is to double that letter. To make the plural of opossum and possum, just add s to the end.

Playing possum is an idiom that refers to the opossum’s characteristic way of responding to threats. When confronted, the animal involuntarily faints in shock for anywhere from several minutes to four hours. Its body goes limp, it drools, and it even emits an odor that imitates the smell of a decaying animal. In English, the phrase is used when someone pretends to be asleep, dead, or ignorant of a situation.

The Japan Times used the phrase in advice about how to avoid a bear attack:

He told me that humans cannot outrun a bear — they are great sprinters and climbing a tree is no good. Playing possum works OK, he said, if one is willing to endure a certain amount of roughing up.

The Times Live reported how an athlete used “playing possum” as a strategy to win:

Le Clos had gone out strong in the heats and semifinal, but seemed to tire on both occasions. It turned out he was just playing possum. Coach Graham Hill said they wanted an outside lane for the final so he could try to shoot away unnoticed. “It nearly worked,” he added.
Your writing, at its best.
Works on all your favorite websites