Shundalyn Allen
Updated on
May 13, 2019Grammar 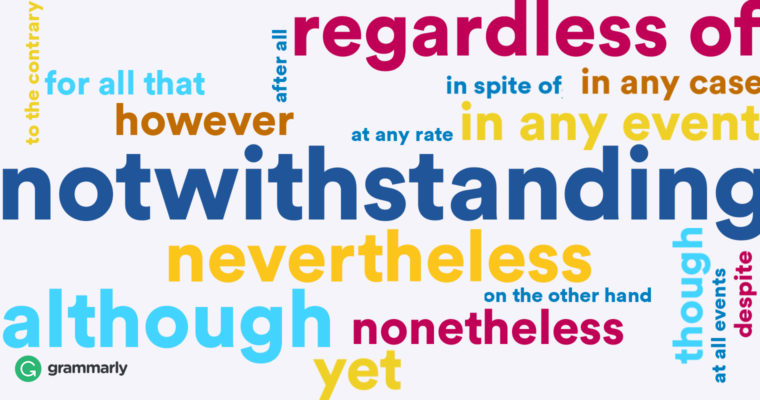 Have you ever encountered the word notwithstanding? You might think it looks like three separate words stuck together—not, with, and standing. But if you think about the definitions of those three words, the term doesn’t make any sense. What does notwithstanding mean? How can you use it? Today is the time to define and learn the purpose of this handy word.

Notwithstanding his nervousness, the young man looked his interviewer directly in the eyes as he answered the questions.

You can also place notwithstanding after its object, so you’ll often see it used like this:

His nervousness notwithstanding , the young man looked his interviewer directly in the eyes as he answered the questions.

Notwithstanding can also function as an adverb. Its meaning is close to “nevertheless” or “in spite of this”:

Although he didn’t have a lot of experience, they decided to hire him notwithstanding .

Notwithstanding that he wasn’t qualified on paper, the interviewer recommended him for hire based on his great potential.

Common Expressions with “Notwithstanding”

Notwithstanding often appears in certain expressions.

Now that you understand what notwithstanding means, you might be interested in how master writers employ it.

I know that you’re selfish, selfish beyond words, and I know that you haven’t the nerve of a rabbit, I know you’re a liar and a humbug, I know that you’re utterly contemptible. And the tragic part is’–her face was on a sudden distraught with pain— ‘the tragic part is that notwithstanding I love you with all my heart’.
W. Somerset Maugham,The Painted Veil
When I speak of home, I speak of the place where in default of a better—those I love are gathered together; and if that place where a gypsy’s tent, or a barn, I should call it by the same good name notwithstanding .
Charles Dickens,Nicholas Nickleby

What will you do the next time you see notwithstanding? You might smile because you know its definition. Better yet, you might just use it yourself.