Learn the Difference Between Miss, Mrs., and Ms., and Mx. 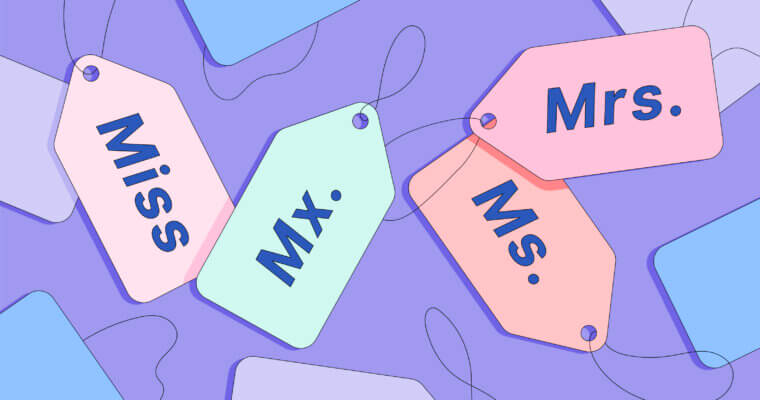 Miss, Mrs., Ms., and Mx. are not interchangeable terms. Addressing someone with the wrong title can cause offense, so it’s important to know the difference between these four options. The guide below will describe how they’ve been used traditionally and how to consider using them now. Here’s a general rule of thumb: If someone tells you they prefer a particular title, that’s the one you should use to address them.

“Miss”, when attached to a name, has been a title of respect for a female child and an unmarried woman. It has been used by itself (as a term of address) or combined with a name, a descriptor of a prominent characteristic, or something the person represents.

Excuse me, Miss. You dropped your bag.

Aren’t you Miss Jacobs from down the street?

Traditionally, in a formal setting, people would use “Miss” along with an unmarried woman’s last name, regardless of how well they know the person in question. It was also used when the woman’s marital status was unknown. The title was applied to women in positions of authority, like teachers or supervisors. In these kinds of settings, it was considered polite to continue using the “Miss” title until the addressee invited you to use her first name.

In contemporary use, “Miss” is considered more appropriate for young women. The connotation of “Miss” as an unmarried woman is loaded by today’s standards, as many women do not want to be addressed in a way that refers to their marital status. (Read on for more options that are marital status-agnostic.)

Note: In some geographical regions, “Miss” appears with a first name, as a sign of respect or affection. But when paired with a full name, “Miss” can also be used as a prelude to a chastisement, especially when used in reference to a child.

Thanks for the invitation, Miss Janice. We’ll see you tonight!

“Mrs.” (pronounced mis-iz) has been a title of respect for a married or widowed woman. As in the case of “Miss”, it appeared with names and characteristics. Sometimes the title included their partner’s first and last name—but this practice is becoming less common, as women want to be addressed by their own name.

In professional (and otherwise formal) settings, when addressing married women, and when speaking to women in a position of authority, it was customary to use “Mrs.” along with their last name. Again, it was polite to wait for an invitation to drop the formal title before using their first name.

In contemporary times, “Mrs.” is used less and less, particularly in professional settings. Still, it appears as an option on many official forms and documents.

What if you don’t know whether someone is married or not? Unlike “Miss” or “Mrs.”, “Ms.” (pronounced miz) doesn’t indicate a woman’s marital status, so it became a good option when you didn’t have that context. The title came into use in the 1950s and grew in popularity during the women’s movement of the 1970s, as “Ms.” seemed a suitable equivalent of “Mister,” a title of respect for both unmarried and married men.

Choosing between “Miss” or “Ms.”

Both “Miss” and “Ms.” apply to women who are unmarried or whose marital status is unknown. Whichever you choose depends on the preference of the person you’re addressing. When in doubt, consider “Ms.”; it’s a more neutral option as it’s marital status-agnostic. Interestingly, some newspaper editors avoid the issue by omitting titles and instead referring to men and women by their full names. However, newspapers usually retain the titles if they appear in a quote.

Prince Harry has said he knew his bride-to-be Meghan Markle was “the one” from the moment they met, as the couple made their first public appearance since the announcement of their engagement.
The Telegraph
”There are simply not enough good things I can say about Mrs. Wendy Hassemer, ” said Cory Chavez, one of her former students at Pojoaque Valley High School, where she taught for 13 years and served as a drama club sponsor, school play director, and all-around mentor.
Santa Fe New Mexican

To use “Ms.”, apply the same rules as you would for “Miss” and “Mrs.” and pair it with a person’s name, or use it on its own as a form of address. However, there are differences in pronunciation between those two titles, which are detailed below.

“Mx.” (pronounced miks) was added to Merriam-Webster Unabridged in 2016 (though it appeared in print as early as the late ’70s.) The honorific functions as a gender-neutral alternative to titles like “Mr.” and “Ms.” And—similar to “Ms.”—it doesn’t indicate marital status. As with the other titles included here, “Mx.” is typically used in conjunction with a person’s name, as a sign of respect.

This is Mx. Schaffer, and they head up the financial department.

According to Merriam-Webster, “Mx.” is often used by individuals who identify outside of the gender binary. But, like the other honorifics described here, it’s not a one-size-fits-all title—some people may dislike it or prefer no title at all, while others fully embrace it—so it’s best to ask, just as you would ask for a person’s pronouns.

>>Read More: The Language of Gender and Sexuality

How to pronounce each

How you pronounce these titles depends on where you live. Let’s start with the easiest: “Miss” rhymes with “this” in all geographical regions.

However, “Mrs.” may sound like “mis-iz” or “mis-is” in the North or North Midland areas of the United States. On the other hand, Southerners may pronounce “Mrs.” as “miz-iz” or “miz.” And, making things more complicated, “Miz” is also the pronunciation of “Ms.” Therefore, in the South, “Mrs.” and “Ms.” may sound identical.

Finally, “Mx.” can sound like “mix” or “mux.” And you’re more likely to hear it spoken aloud in the UK than in the US, as the term is more widely known and used there.

In British English, you may see “Mrs.” spelled out as “missus” in print, though this is rare in American English.

“I actually did an interview with ESPN — while on a drip — through a Zoom call. It went on TV and literally no one noticed other than my
missus, because no one knew where I was.”
Evening Standard

Another difference is punctuation—Brits don’t use a period after Mrs. or Mx., though Americans do:

Mrs Foster told MLAs that Lord Frost recognised that there were no unionists in favour of the current arrangements.
BBC
User @lgbtqstemberlin wrote: “It’s getting better!” while @barilleon tweeted: “Today, I can select the title
‘Mx’ and they/them pronouns on the White House contact page. I know it’s not much, but it’s a start.”
The Independent

While most people use titles such as “Miss”, “Mrs.”, “Ms.”, and “Mx.” to show respect, you can risk offense if you don’t use them correctly. So it pays to know how each works. These prefixes shouldn’t be confused with personal pronouns, which can represent people’s identities beyond the gender binary. And remember: It’s always best to defer to a person’s title and pronoun when you address them. That way, you’ll be able to build empathetic relationships with the people in your life.

This article was originally written in 2018 by Shundalyn Allen. It’s been updated to include new information.