When to Use Italics, With Examples 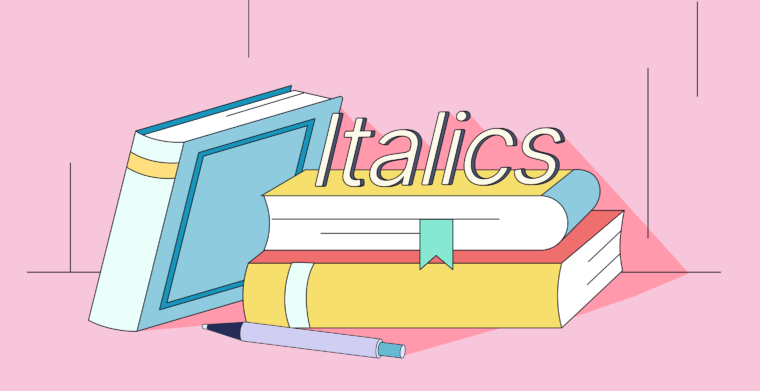 Italic font, or italics, is a style of typeface in which the text appears slanted, like this. While italics are mainly used to draw attention to certain words or passages, the font also plays an important role in differentiating the titles and names of things—such as novels, movies, and even spaceships—from other text.

There is a lot of confusion about which types of titles use italics and which use quotation marks. So below, we explain everything you need to know about italics, including when to use them and when not to.

In typography, italics are a typeface, along with bold, underline, and the standard roman. The original intent of the design was to recreate calligraphy and handwriting in print, although today it’s simply slanted text. The original designers, Aldus Manutius and Ludovico Arrighi, were both from Italy, which the style is named after.

What is the purpose of italic font?

In writing, italics are used to set apart certain words, like the bold and underline typefaces. However, italics have taken on a more serious role in academic writing as a way to distinguish the titles and names of certain works, such as books and plays, from other types of works, such as articles and poems (which use quotation marks instead).

Italics are especially important for the works cited page, where they indicate certain types of sources. Often, we italicize the titles of content collections, including periodicals and websites, while the shorter works within, such as articles, instead use quotation marks.

Are movie titles in quotes or italics?

Are poem titles in quotes or italics?

Most poem titles are written in quotes. While we use italics for the titles of epic poems, which are book-length poetry, the titles of short poems always use quotation marks.

When to use italics?

Italics are used for the titles of longer written works, including books, volumes, dissertations, reports, and epic poems.

Stephen Hawking’s A Brief History of Time talks about astrophysics in a way anyone can understand.

Swann’s Way, the first volume of Marcel Proust’s masterpiece, In Search of Lost Time, includes the famous anecdote about the madeleine.

Much of classic literature consists of epic poems like Gilgamesh or The Iliad.

There is some debate about whether to underline or italicize book titles, but both are generally accepted. Since most writing nowadays is typed, italicizing is more prominent than underlining.

The names of periodicals—specifically news websites, magazines, and newspapers—are italicized. However, individual articles use quotation marks for their titles. Websites that do not feature news articles, including social media platforms, use neither italics nor quotes in their titles.

I got a link to HuffPost from LinkedIn.

The titles of movies, stage plays, and TV shows are italicized. However, the names of individual TV show episodes use quotes.

Most fans agree the best episode of Rick and Morty is “Pickle Rick.”

The Lion King is an animated film loosely based on Shakespeare’s play Hamlet.

The titles of podcasts and radio shows are italicized, while their individual episode titles use quotes.

In the radio show This American Life, the episode “Break-Up” features the musician Phil Collins.

The names of music albums and longer musical compositions are italicized, while individual song names use quotes.

Mozart’s opera The Magic Flute often overshadows his lesser-known works, such as the Lodron Concerto.

Apps and video games are considered long, published works, so their titles are italicized. Board games, card games, and other such games are not italicized.

I was up all night playing Fortnight.

She preferred TikTok because it made her laugh more than Instagram.

However, if you’re referring to the corporation or company—and not the name of the app itself—use neither italics nor quotation marks. I heard on Twitter that Elon Musk was stepping down as the head of Twitter.

The titles of classic art works, such as paintings and sculptures, use italics.

Michelangelo created two of the Renaissance’s most important works: the fresco The Last Judgement and the sculpture David.

The italic font is also used to set apart the names of legal cases.

The case of Marbury v. Madison gave the court the ability to strike down laws on the grounds that they are unconstitutional.

The names of large vehicles—including ships, aircraft, spacecraft, and trains—are italicized. The names of smaller vehicles—such as cars, trucks, and bikes—are not.

The Titanic has been the obsession of marine researchers since it sank.

The Apollo 11 mission involved two spacecraft, the Eagle and the Columbia.

In English writing, words from other languages are often italicized so the reader doesn’t confuse them for English words.

It was nearly 8 p.m. by the time we arrived, but I say, mieux vaut tard que jamais!

However, English tends to “borrow” words—known as loan words—from other languages. So if a foreign phrase is common in English, you do not need to italicize it.

Karaoke is my raison d’être.

The scientific names for organisms, known formally as binomial nomenclature, are written in italic font. These names use the genus and species names of the creature.

Felis catus is commonly known as the house cat.

If you want to discuss a word itself, you can put it in italics. This tells the reader you’re talking about the term and not using the word as intended.

Italics also work well if you’re introducing a new word in text and want to explain it.

Droplets on a glass are a sign of condensation, when vapor in the air turns into water.

Also use italics to discuss letters of the alphabet.

In the alphabet song, why are l, m, n, and o sung so quickly?

In creative writing, italics often show a character’s thoughts or inner monologue, while quotation marks show what is spoken out loud.

“Remain strong, everyone,” said the head cheerleader from the top of the pyramid. Easy for you to say, thought the cheerleaders at the bottom.

Lastly, italics are used to show emphasis in a sentence. You can italicize a word, phrase, or passage to make it stand out. This is often used to add deeper meaning to a word or phrase, such as an insinuation or a double entendre.

“I hope you don’t have another accident,” he said with a sly grin.

The school does not allow swimming after 10 p.m.

For emphasis, italics are preferable to quotation marks around a single word. When quotes around a word or phrase are used for emphasis, it suggests disbelief or invalidity.

When should italics not be used?

While we use italics for the titles of long writing, short writing uses quotation marks. This includes the titles of articles, short stories, most poems, and chapters.

The line “What happens to a dream deferred?” comes from Langston Hughes’s poem “Harlem.”

2 Locations, landmarks, and other geographic names

The names of geographic locations—including cities, states, and countries—use neither italics nor quotes, although they are capitalized.

The Grand Canyon was carved by the Colorado River.

While the names of religious texts are capitalized, they are neither italicized nor placed in quotes.

Texts such as the Koran and the Torah are full of wisdom from the ages.

4 With bold or underline

Try to avoid using italics with other stylized typefaces, such as bold and underline. Since all three are designed to make words stand out, only one at a time is necessary.

With online writing, however, it’s acceptable to underline italicized text if it’s hyperlinked.

Italics are a typeface where printed text looks slanted.

When should italics be used?

Use italics for the names of legal cases, some vehicles, and certain titles in art and writing. The italic font is also used to emphasize particular words or phrases, including foreign words and scientific names.

When should italics not be used?

Italics should not be used for the titles of short works, such as poems, articles, short stories, or song names—all of which use quotation marks instead. The names of geographic locations and religious texts use neither italics nor quotes, but they’re still capitalized.

What are some italics examples?

The Catcher in the Rye was listed as one of Time’s greatest novels of all time!