With nearly fifty definitions in the dictionary, it is safe to say that on is a popular word. It functions as a preposition, an adverb, and an adjective. In the game of cricket, it is used as a noun. En is not nearly as common as on. It appears in some words as a prefix, but you will only find a few definitions of it as an individual word. In those cases, it refers to the letter n. How, then, did it appear in the phrase en pointe? And what’s the difference between en pointe and on point? 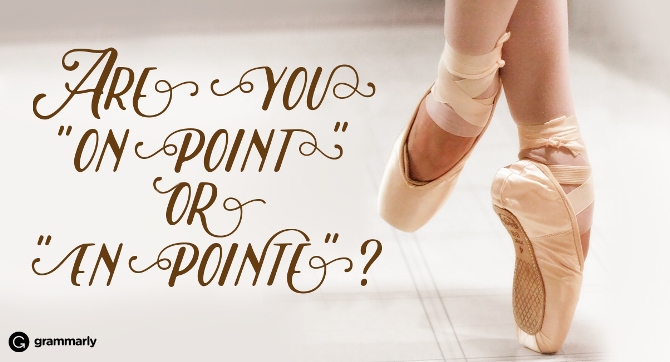 En pointe is a French term. In ballet, dancers moving gracefully on the tips of their toes are en pointe. Though the dictionary defines en pointe as a ballet term, you may hear something that sounds a bit like it outside the dance floor. But before we discuss that, let’s talk about on point. In law, on point means applying directly to the topic under consideration. In the military, to be on point means to take a lead role in an operation or to be ready for action.

But which spelling is correct? It depends on the origin of the phrase. Like most slang, the etymology is tricky to trace. If it’s from the ballet world, it’s en pointe. But if it’s from law or military life, it’s on point. When people talk about staying on topic, it makes sense that they are adopting the law term. Nevertheless, the “en” in en pointe sounds like “on.” Over time people may have spelled it incorrectly, so on point could conceivably have derived from en pointe. However, there is scant evidence to support this conclusion, so it’s probably best to limit the use of en pointe to ballet in formal contexts.

If you wanted to praise a model’s outfit, should you say it’s on point or en pointe? The model is not dancing on her tiptoes. Nor is she leading a military operation or arguing a case. Urban Dictionary, an online slang dictionary, defines en pointe as “perfect, great, or awesome.” The same source defines on point as “to be perfect; to satisfy.” So, regardless of whether you choose to use on point or en pointe, the outfit is awesome!