What Does Imperative Mean? 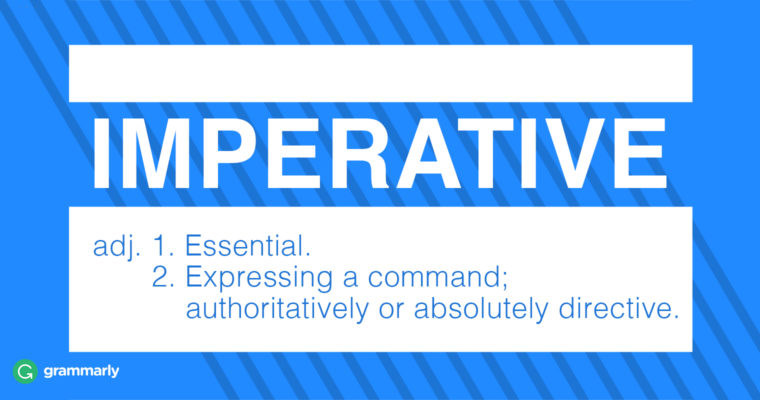 Imperative can be one of the following:

When you define the word imperative, you should note that it can be an adjective and a noun. In both cases, imperative has two distinct meanings: one of urgency, necessity, and importance and another of trying to influence other people’s actions.

What is an imperative sentence?

Imperative can be traced all the way back to the Latin word imperare, which means “to command.” This is the sense in which the word is used today in grammar, and you might have seen it going together with the words mood and sentence.

Sit down and eat your lunch.

In this sentence, someone is giving a command. It can be easily distinguished from indicative sentences, which simply state that something has happened:

He sat down and ate his lunch.

In case you’ve noticed that imperative sentences sometimes don’t have a subject, you should know that they do, even if it’s not actually written in the sentence. You is the subject in this case, but since it’s not written, it’s called you understood, and it’s written as (you).

If you’re wondering how to use the word imperative in a sentence—simply put it there when you want to describe something as very important. The place of imperative on the scale of adjectives that imply importance is debatable, but it is certain that something that is imperative is more important than something that is nonessential, trivial, unimportant, or optional. These words are the antonyms of imperative. Its synonyms include the words crucial, vital, critical, and pressing.

On the other hand, imperative can also be used to say that something is commanding. So a person who speaks with an imperative tone of voice is probably a person who is used to issuing commands.

As for the imperative mood, you make it by taking the infinitive of a verb and removing to. Use it when you want to issue commands and orders, but also when you want to make requests—just remember to add please to the sentence.

In my view, mediamacro and its focus on the deficit played an important role in winning the Conservatives the 2015 general election.

It was “imperative” that the rules ensured bosses could not avoid their responsibilities to pay pensions, they added.

“Acting East” is no longer just an option but an imperative for Indian foreign policy.

The need for an honest evaluation of the military’s flaws and failures becomes an imperative for those with a sincere and substantive desire to “support the troops.”