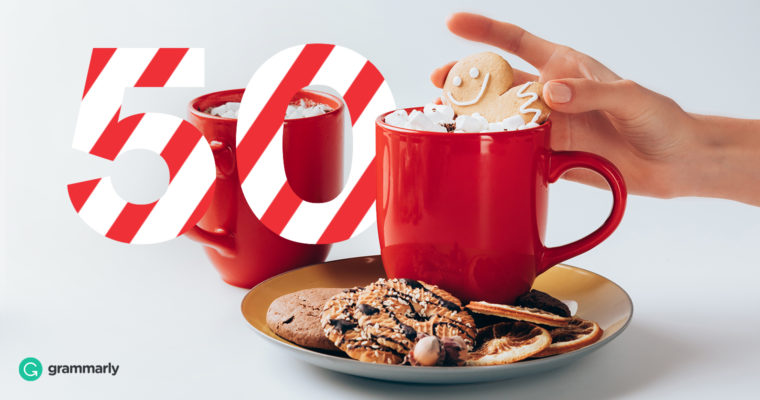 The winter holidays are upon us, and these celebrations with their many traditions each have a rich and varied vocabulary.

From Krampus to kinara, latke to plum pudding, frankincense to yule—there’s a whole host of fantastic holiday words to explore.

Vary your vocabulary
Be the best writer in the office.
Write with Grammarly

So broaden your lexicon and enter the holiday spirit with these fifty awesome holiday words!

A Latin word meaning “coming;” the Christian season of expectant waiting and preparation beginning four Sundays before Christmas. Many people count down to the holiday with festive advent calendars made specifically for this purpose.

A small, decorative sphere hung from a Christmas tree.

A British holiday celebrated the day after Christmas; traditionally when servants and tradespeople were given a “Christmas Box” by employers.

A festive song or hymn sung at Christmas.

A religious and cultural festival celebrating Jesus Christ’s birth that is typically observed on December 25th.

A hollow structure allowing smoke from an indoor fireplace to vent outside; also Santa Claus’s magical entryway into homes.

A four-sided top used by children to play a gambling game during Hanukkah.

A highly-educated priest or professional in the ancient Celtic cultures of Britain and Gaul.

An alcoholic drink made with cream, sugar, eggs, and distilled spirits.

Magical, pointy-eared creatures who build toys for well-behaved children at the behest of Santa.

A Christian feast day celebrated on January 6th, commemorating the Magi’s visit to the baby Jesus.

The English personification of Christmas, now synonymous with Santa Claus.

The eight-day “festival of lights” commemorating the rededication of the Jewish temple around 200 B.C. The holiday is celebrated by lighting candles, eating fried foods, playing games, and giving gifts.

An evergreen bush with red berries and prickly leaves used as a winter holiday decoration in pagan and Christian traditions.

A Hebrew name meaning “God with us.”

A candle holder for the seven candles lit during Kwanzaa.

A half-goat, half-demon character of European folklore who punishes misbehaving children during Christmas.

A region in Finland rumored to be where Santa Claus lives.

Pancakes made of grated potato, fried in oil, and served during Hanukkah.

The Zoroastrian priests of ancient Persia. According to tradition, three of these “wise men” visited the infant Jesus.

An open box or trough holding food for livestock.

A phonetic translation of “Merry Christmas” into the Hawaiian language.

A nine-branched candelabrum used during Hanukkah.

An extraordinary and welcome event, unexplainable by scientific laws.

A parasitic plant with white berries, hung from doorways as a Christmas decoration. People are expected to kiss when standing beneath it.

Gloves with one opening for the thumb and another for the four fingers.

The place and conditions of a birth; commonly used to refer to the birth of Jesus.

Believed by many Westerners to be Santa Claus’s home.

A device used to crack open the shells of nuts. Also, the name of a popular ballet set during Christmas, scored by Tchaikovsky, staged during the holiday season.

A Mexican shrub first used as a Christmas decoration by Franciscan friars in the 17th century.

A mythical, white-bearded man clad in red who delivers presents to well-behaved children on Christmas Eve; based on legends of the historic Saint Nicholas’s generosity.

A sled typically pulled by horses or reindeer.

A long, wooden sled used to coast down snow-covered hills.

The first day of winter and shortest day of the year (in the Northern Hemisphere).

A circular arrangement of greenery or flowers.

A pagan festival celebrating rebirth and renewal, held on the Winter Solstice.

LifestyleLanguage to Protect Your Mental Health

Lifestyle20 Women Who Paved the Way in Writing

LifestyleSelf-Love Affirmations to Tell Yourself Daily
Writing, grammar, and communication tips for your inbox.