What Is a Ghostwriter? 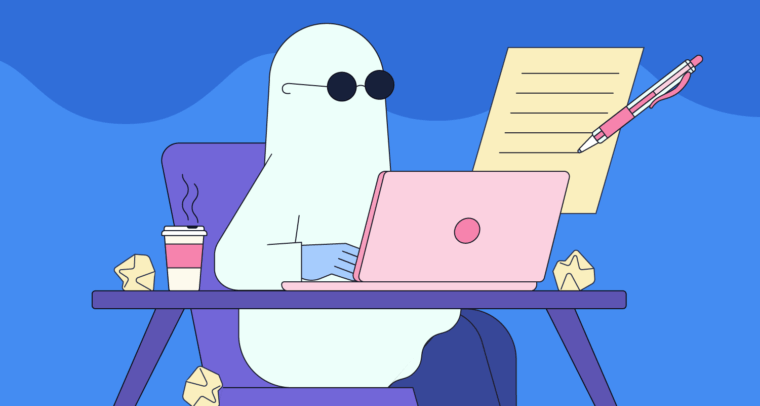 Ever wonder how James Patterson can churn out so many novels each year? Or how Carolyn Keene keeps producing Nancy Drew mysteries ninety years after the first one was published? Maybe you’ve seen CEOs with a few productivity books and wondered how they had time to write them.

You’re not alone. It might come as a surprise to you, but there are thousands of books that weren’t written by the person credited as the primary author. That person had some help from another writer, a ghostwriter.

Consider this your complete resource for information on ghostwriters. In this guide, you’ll learn all about ghostwriting, how to become a ghostwriter, and some famous books that have been ghostwritten.

What is a ghostwriter?

A ghostwriter is hired to write works that officially credit another person as the author. Typically ghostwriters sign a contract with the credited author that requires them to keep their work confidential, often through a nondisclosure agreement.

Usually, a ghostwriter won’t be credited at all. But if the credited author does want to shed light on their ghostwriter’s work, they may acknowledge them as a researcher, research assistant, or cowriter, often at the end of the book.

The works created by ghostwriters can be any type of published writing, including the following:

Why do authors use ghostwriters?

Ghostwriters help an author by making the writing process more manageable and producing work more quickly. They’re often hired by celebrities, corporate executives, consultants, news witnesses, political leaders, and other notable people who want to create written material. There are many reasons why someone might want to hire a ghostwriter.

The two most common reasons are that they don’t feel they have the writing skill set to produce a book or article or they don’t have the time to do it.

Public officials use ghostwriters for many reasons, primarily to save time and sound more eloquent. They hire ghostwriters for everything from official correspondence to autobiographies, speeches to policies. Celebrities often hire a ghostwriter to help them craft a memoir or autobiography. Such publications can be another stream of revenue and publicity for them.

Famous writers sometimes hire ghostwriters to keep producing work when they don’t have the time, ability, or interest to continue writing themselves. In some genres, like romance, young adult fiction, and action, publishers establish a single name and hire ghostwriters to create novels under that pen name. Action novels credited to Tom Clancy, the Jason Bourne series, Goosebumps, and the Nancy Drew series are all ghostwritten, for example.

How common are ghostwriters?

Ghostwriters are probably more common than you think. Because of legal paperwork, it’s hard to know precisely what percentage of writing is ghostwritten.

There are thousands of ghostwritten books out there, dating back as early as the fourteenth century. It’s not an uncommon practice; it’s just rare that you see behind the curtain. Ghostwriters are often required to keep their work secret, and most credited authors don’t want to share this information.

Ghostwriting as a career

Many ghostwriters specialize in “disappearing” into the writing style readers are familiar with. They’re talented impersonators who can mix their ideas, tone, and word choice with those of the person for whom they’re writing. For those who possess this unique camouflaging skill, ghostwriting can be a lucrative career.

As with any career, becoming a successful ghostwriter takes time, practice, and persistence. But once you’re a few years in, you’ll be able to charge a decent rate for your work. Plus, you’ll get to spend hours interviewing interesting people or creatively crafting stories.

How to get a job as a ghostwriter

There are many paths one can take to become a ghostwriter. Of course, you’ll need to know how to do the type of writing you’re offering before you can get hired. The first step to starting any writing career is establishing a portfolio of things you’ve written, like manuscript drafts, or blog posts.

You can start finding work on a freelance job board, get hired by an agency or publisher, or start an independent business.

How much do ghostwriters get paid?

There are a variety of ways to get paid as a ghostwriter. Pay depends on the length of the text, the source of the work, the ghostwriter’s experience, and the client’s notoriety. You might charge a flat fee or an hourly, per word, or per page rate; you might accept a percentage of royalties or advances or take a combination of payments.

On average, ghostwriters make between $40,000 and $70,000 for a 30,000-word book if they work directly with a publisher. But if you’re working freelance, you might make around $15,000 for a shorter book. Some romance publishers pay just $65 per story. At the other end of the range, an experienced ghostwriter can earn from $100,000 to $250,000 per book—especially if they’re writing for a notable public figure.

The difference between ghostwriting and copywriting is style and project scope. Copywriters are typically tasked with creating marketing materials, the words on product packaging, directions, and company or organization materials. Ghostwriters usually craft narrative work, whether it’s a fictional or a true story.

1  The Count of Monte Cristo

Alexandre Dumas’s The Count of Monte Cristo (1846) was ghostwritten. It’s estimated that at least half of the book was written by Auguste Maquet, a historian and an author. The two met by way of Maquet’s literary connections. Dumas wrote more than 100,000 pages of work in his career, but he didn’t do it alone. Maquet worked with Dumas from 1838 to 1951.

The beloved mystery series, which debuted in 1930, has always been attributed to Carolyn Keene. The series is actually written by multiple ghostwriters. The publishing industry calls this practice book packaging. Several writers are contracted to create a series of books under one pen name. The publisher creates a source of truth, outlining characters, voice, setting, and other basics that writers like Alice Leonhardt (a ghostwriter for the series) follow.

How does one author publish over two hundred titles in twenty-six years? Ghostwriters. Patterson is a world-renowned author of action, romance, and young adult novels. He’s been co-writing his books since 2001. While this is not a secret, there is some debate about whether this practice is considered ghostwriting or co-authoring.

4  The Pursuit of Happyness

Chris Gardner wrote his 2006 autobiography with the help of the writer Quincy Troupe. Troupe was California’s first poet laureate and was also a literature professor at the University of California, San Diego.

5  The 7 Habits of Highly Effective People

One of the most popular self-help and business books was written by ghostwriter Ken Shelton. Published in 1989, the book explores credited author Stephen Covey’s step-by-step process of bringing principles of integrity, human dignity, and fairness to daily life. Shelton is an author in his own right, creating leadership books and speaking at conferences.

What is a ghostwriter?

A ghostwriter is hired to write works that officially credit another person as the author. They’re often hired by celebrities, corporate executives, consultants, news witnesses, political leaders, and other notable people who want to create written material.

What do ghostwriters do?

Ghostwriters write books, outlines, plotlines, and other materials based on the specifications of, or in collaboration with, the credited author. They sometimes work off of interviews with the author or an outline provided by the author.

Why are ghostwriters used?

Ghostwriters help authors and other influential people, like celebrities and political figures, efficiently create a cohesive book or written piece. Ghostwriters are usually hired to save time or to help a credited author articulate their ideas or story.