How Freewriting Can Boost Your Creativity 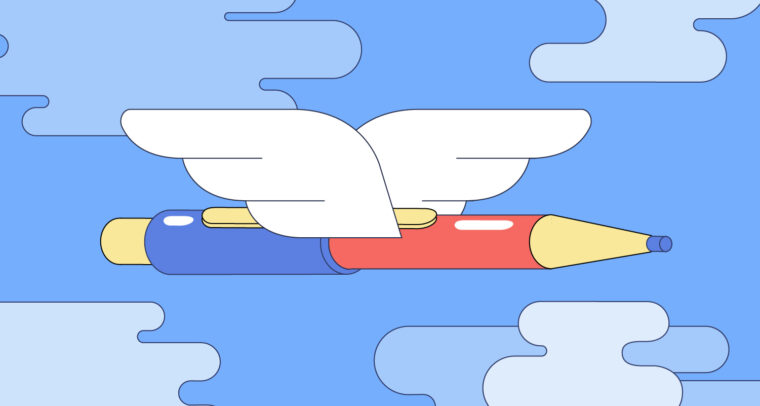 Freewriting is a technique in which the author writes their thoughts quickly and continuously, without worrying about form, style, or even grammar. Alongside brainstorming, freewriting is typically used early in the writing process to collect and manifest one’s thoughts. The resulting writing is usually not intended for the final draft.

Freewriting can be a liberating, albeit intimidating approach especially in creative writing, journalism, and academic writing. It means to write at your best, you first have to write at your worst!

Freewriting is invaluable for organizing your thoughts and overcoming creative hurdles like writer’s block. But there’s a little more to it than just “write quickly, badly.” Here’s a quick guide to answer all your questions and determine if freewriting will help your process.

When we write, we never just focus on the writing itself. We’re focusing on what the reader will think, whether they’ll understand it, and how certain parts fit into the big picture, all while avoiding spelling and grammar mistakes. The goal of freewriting is to wipe away all those secondary concerns and return to a focus solely on the writing.

Of course, the final product won’t be “publication ready.” The point is to reveal your writing’s pure and distilled essence without worrying about those distractions.

The benefits of freewriting revolve around organization, brainstorming, and inspiration, as well as beating writer’s block and relieving certain anxieties. Just getting anything written, even if it is imperfect, can jump-start creativity.

Freewriting can also defuse some of the writer’s own internal obstacles: self-criticism, apathy, fear of failure, maladaptive perfectionism, or even deadline dread.

Just like brainstorming, freewriting produces a handful of ideas that you can later rearrange and develop further. However, unlike brainstorming, freewriting also adds insight into the optimal order of your topics and structure as a whole. It can also help cultivate your unique writing voice. Not to mention, it can inspire some ideas you may not have thought of otherwise.

Furthermore, because you’re actually writing, you may generate some words, phrases, or sentences that you can carry over to first draft—after a proper polish, that is.

Typically, a writer will set aside a certain amount of time—the standard is 15 to 20 minutes— and write without stopping. If you have a topic already, you can start with the most basic thoughts on that. If not, write about whatever comes to mind . . . literally. When you make a mistake, keep going. Don’t worry about what your reader will think or what the next sentence will be, just keep going no matter what. Embrace the flow.

Freewriting is supposed to be sloppy, disjointed, and full of errors. That’s how you get those raw and unfiltered ideas. Give yourself permission to write poorly; you’ll be surprised at how much good writing comes to you when you take the pressure off.

Forcing yourself to write under these conditions creates a certain mindset. It taps into the part of your consciousness that’s not weighed down by distractions like fretting what the reader will think or puzzling over how to spell “occurred.” When you’re blocked creatively or paralyzed by too many ideas at once, freewriting is just what the doctor ordered.

To see it in action, check out these freewriting samples from Lumen Learning. You can also look into the works of known writers Peter Elbow and Natalie Goldberg, who both helped popularize the freewriting technique.

Freewriting doesn’t have a lot of rules (that’s why it’s called freewriting), but there is one you must follow: Don’t stop writing until you’ve reached the time limit. Your hand should always be moving, whether you’re typing or writing it out freehand. This is part of what makes freewriting useful; it forces you to write something, urging you past any resistance, especially from yourself.

When to use freewriting

As we’ve mentioned, freewriting is a handy technique for the first stages of the writing process. However, there are many other times to embrace it.

Freewriting is a popular cure for writer’s block and other creative hindrances. More often than not, writer’s block stems from fears and anxieties—sometimes, these are subconscious. freewriting alleviates those fears by providing a safe environment where mistakes are not only forgiven, but also encouraged.

Freewriting is ideal for getting one’s thoughts on paper, like an intensive brainstorm. Often the stress of getting started is enough to prevent us from getting started, in which case freewriting gives us a loophole.

You want to practice stream of consciousness

The literary technique “stream of consciousness” has a lot in common with freewriting. It’s used in narrative writing to mimic how one “sounds” in their own head, made famous by writers like James Joyce and Virginia Woolf. If you think stream of consciousness would suit your project, freewriting is a natural gateway to get your feet wet and get into that mindful flow.

Speaking another language isn’t just about memorizing vocabulary and usage—reaching fluency also requires thinking quickly and conjuring up the right words as quickly as possible. Freewriting in your second language strengthens these time-sensitive language skills. Even if you make grammatical mistakes while freewriting, it’s a powerful way to practice organic expression in a new language.

You’re new to the writing process

Writing is a skill that gets better with practice. If you’re just starting out, you can use freewriting to train the fundamentals. Treat it as a literary warm-up exercise. Try doing a freewriting session every day and watch your writing improve after just a couple weeks!

What do you do after freewriting, when you’re left with a meandering draft full of mistakes? Grammarly can instantly identify all the spelling and grammar mistakes in your freewriting sample, and even suggest the best fixes for clarity, tone, and conciseness. Download it now to make sure everything you write is polished, easy to read, and mistake-free.