If someone called you a statue, you might not find it so flattering. However, if someone called you statuesque, you would probably thank them for the compliment. What does the suffix -esque mean? Can you add -esque to any word? Here come the answers!

This suffix means “in the manner of, resembling.” So statuesque means suggestive of a statue in dignity, grace, or beauty. Is there another way to express the idea behind -esque? You could use an adjective. For instance, instead of saying that something is lionesque, you could use adjectives to describe the qualities that remind you of a lion: proud, majestic, fear-inspiring, feline, etc. You could also see if the similar suffix -like works: The man was lionlike.

How to Use -Esque

What do you do if you can’t find a preexisting -esque word that fits? It’s not very often that English allows you to invent a word on the spot, but in this case it’s acceptable. You can add -esque to almost any noun. For example, if you think that your neighbor resembles Abraham Lincoln, you can describe his face as Lincolnesque.

Does -Esque Need a Hyphen?

Does -esque need a hyphen? No, the hyphen is optional. And don’t worry if your spelling checker puts a red squiggly line under your novel -esque words. The alert lets you know that the word isn’t in the spelling checker’s dictionary; that doesn’t mean it’s wrong. But if the hyphen is unnecessary, why ever would you add it?

Imagine you were reading an ESPN article and you find this quote:

On this night, he was Namath-esque, driving the ball downfield against a couple of very good cornerbacks.
ESPN.com

If you aren’t familiar with football, you might not know that Namath is the name of a former football player. So you look up Namathesque in a dictionary, but you won’t find it there. The hyphen alerts readers that the -esque word might be a unique one. If you see the hyphen, you would probably search for Namath on the Internet rather than in a dictionary.

In other cases, a hyphen can make an -esque word a little easier to read, especially if you’re adding -esque to a word that already ends in a vowel.

Additionally, there are some situations where you’d want to add esque to a more complex name or phrase. In these cases, consider using an en dash instead of a hyphen. Some style guides opt for an en dash to lend extra precision and communicate a clearer link than a hyphen would. According to the Chicago Manual of Style, when adding a suffix to a compound word,  a multi-word proper name, or multiple connected names, use an en dash (–). An en dash can make it clear you’re attaching it to the whole multi-word string, instead of just the last word.

The royal palace–esque place settings were elaborate, yet understated.
Her voice was hopeful but a little sad, very Judy Gardland’s “Over the Rainbow”–esque.
Snow, ice, and branches flew down the mountain, so I deployed my avalanche vest and survived the tidal wave–esque torrent.
They had a lively, Laverne and Shirley–esque chemistry on stage. 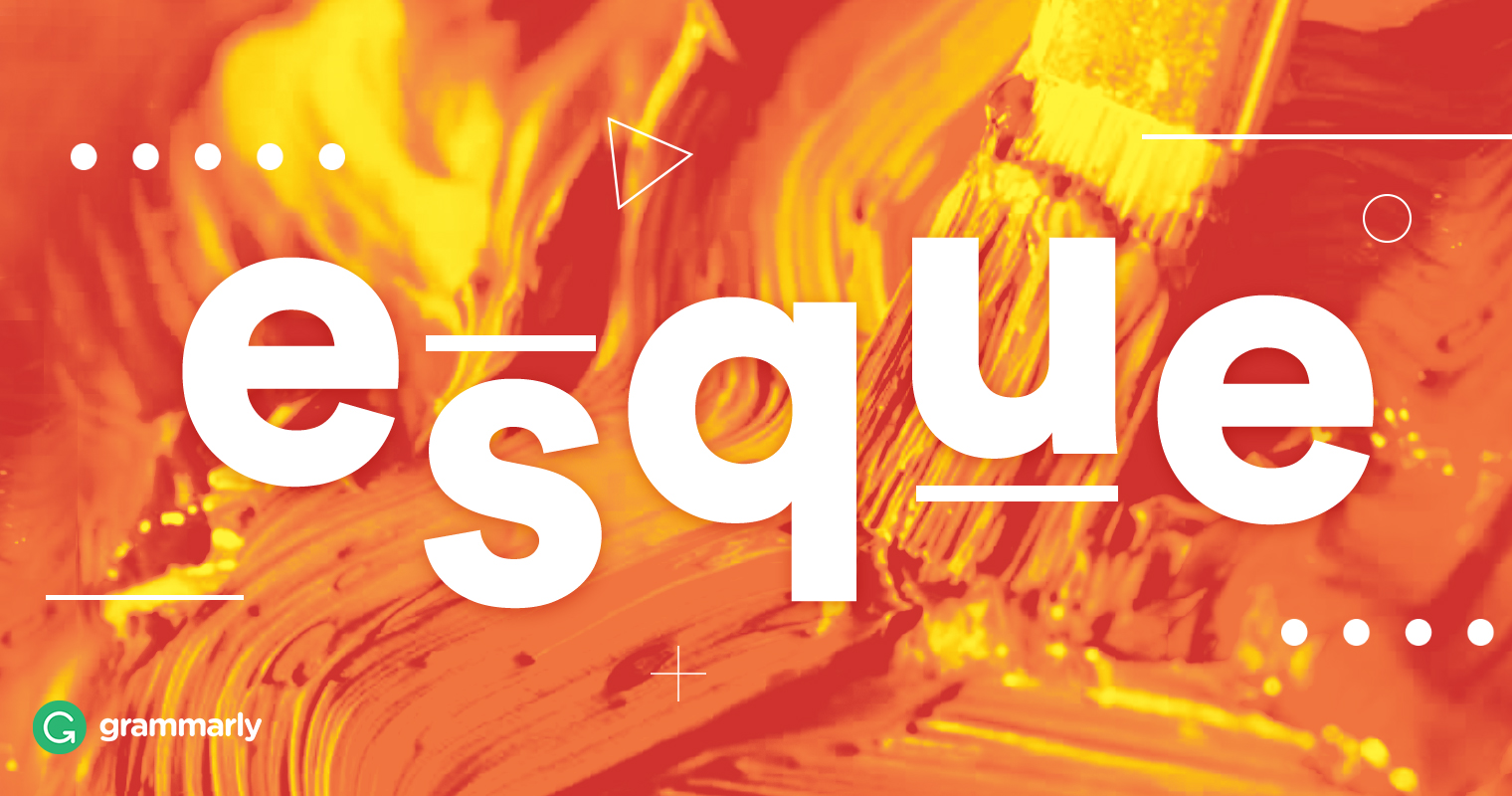 What are some other words ending in the suffix -esque? Here are five common examples from dictionaries—arabesque, burlesque, gigantesque, grotesque, picturesque. Let’s look at some examples of people creating their own -esque words.

Mel’s new Santa-esque look will likely be wasted on his unborn ninth child to new girlfriend Rosalind Ross, who is not expected to give birth until after the 2016 holiday season.
DailyMail.com
Details of the new series are being kept under wraps, but I hear it is a prequel, described as a Malcolm in the Middle-esque single-camera family comedy centered on the child prodigy Sheldon character at age 12.
Deadline.com
The importance of Rogue One, however, goes far beyond entertainment value and even profit margins, as the ultimate success or failure of this movie could have a major impact on the future of the Star Wars franchise and, more specifically, the potential for a Marvel-esque Star Wars Cinematic Universe.
Fansided.com

Can you add -esque to any word? Pretty much. What does the suffix -esque mean? It means “reminiscent of” or “in the style of.” What other questions do you have about -esque?