The 9 Types of Diction in Writing, With Examples 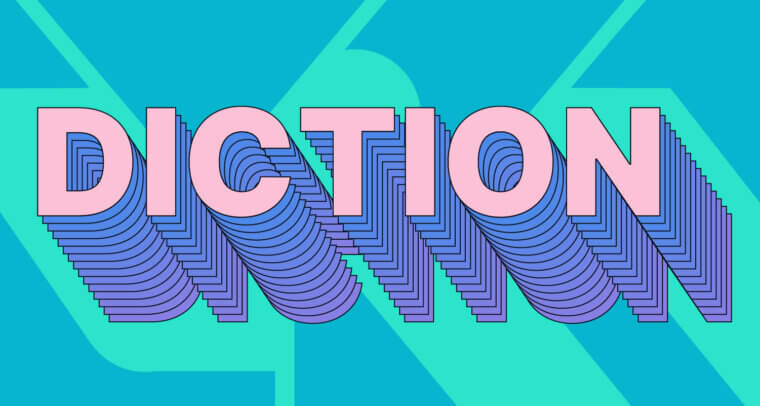 In writing, diction is the strategic choice of words based on the audience, context, or situation. It can also express additional meanings or particular styles. The words you’d choose in an email to your teacher or work colleague are different from the words you’d choose when speaking to a close friend—that’s diction.

Of course, in practice diction is a little more complicated, so here we discuss everything you need to know about diction. We’ll start with a more precise definition of diction and then continue with the different types of diction, including diction examples.

What is diction in writing?

The short answer is that diction is word choice. Different situations and audiences call for different styles. For example, work and school matters require formal language, while conversations with friends use informal language. It goes even deeper than that—consider the language you use when you’re speaking to a child or trying to describe a feeling you can’t quite explain.

So what is diction in writing? Diction determines the words you use, which consequently determines the writing style and type of tone you use. Through diction, a writer can sound friendly or serious, knowledgeable or clueless, poetic or dry.

Good writers use diction to also communicate subtext and layered meanings beyond words’ literal definitions. For example, if a character speaks with large academic words, the reader can assume that they want other characters to think they’re smart. Showing character detail through indirect characterization like this has more impact than expressing it literally through words alone, as with direct characterization.

Diction also affects sentence structure. For example, you might use shorter sentences when speaking to people with short attention spans and use longer, complex sentences around a more patient audience.

Sentence structure in turn affects paragraph structure, so it’s best to also put some thought into diction before your writing goes in a direction you didn’t intend. This makes diction a crucial part of all writing careers.

What is diction in speech?

Diction in speech refers to enunciation, or how well a speaker pronounces their words. A person who speaks clearly has good diction, while a person who mumbles or mispronounces their words has poor diction. Speech diction is an important skill for public speakers, actors, singers, and those in careers with an emphasis on speaking clearly.

In this article, however, we focus solely on diction for writing, the choice of words.

Diction is often confused with another language concept, syntax. While diction deals with the choice of words, syntax deals with the arrangement and organization of words.

Although the two are related and affect one another, they represent different ideas. Diction involves choice and flexibility—different writers can use different words to sound unique, even when they are describing the same thing. Syntax, on the other hand, is more tied to grammar rules, so there’s less flexibility involved. Certain words must go in certain orders to be grammatically correct.

9 types of diction in writing

There are different types of diction, each with its own specific style that works best in particular scenarios. Below, we outline the nine most common and useful types of diction; understanding these will increase the quality of your writing in a variety of situations.

For these examples, we illustrate the different types of diction by demonstrating what a speaker or writer would say using that style. To best show the differences in each of the diction types, we use the same example: the speaker disagreeing with what was just said.

Formal diction uses the proper definitions of words in a mostly serious tone. This is the style of workplaces, schools, and other formal environments. Formal language doesn’t take any risks and can come across as bland or boring, but for the sake of clarity, it’s the best choice when speaking to strangers or authority figures.

Respectfully, I must disagree.

No way, that’s not true at all.

Pedantic diction uses an excessive amount of academic or “big” words, as if the speaker is trying to prove how smart they are. Pedantic diction comes across as arrogant in real life, but it’s nonetheless useful as a writing tool. In fictional dialogue, it can show that a character is overly concerned with appearing intelligent or sophisticated, as with Jay Gatsby in The Great Gatsby.

In examination of your stance, I have identified some critical errors that I will now expound on.

Pedestrian diction is considered the opposite of pedantic; instead of trying to sound smart, it’s trying to sound normal or common. Pedestrian diction, which doesn’t use fancy words or slang, is thought to be how regular people talk. It’s the type of diction used by politicians when speaking to diverse crowds or by people with technical knowledge when explaining something to people without that knowledge.

I understand what you’re saying, but there’s something very important that you’re missing.

Diction with slang, an extension of informal diction, encompasses words and phrases that only a particular type of person understands. Slang is often divided by generation, such as “sussy,” used by Gen Z, and “nifty,” used by baby boomers. Slang can also encompass business jargon, which is slang that’s understood only by people in a certain profession or trade.

You’re full of it!

Similar to slang, colloquial diction refers to specific words or phrases used in particular geographical locations. For example, people in the Northeast and on the West Coast of the US use the word “soda,” those in the Northwest and Midwest say “pop,” and those in the Deep South use “coke” as a generic term. All three words mean the same thing but reflect the language of a specific region. Colloquial diction also includes special expressions that are popular only in certain areas.

Colloquial diction can also represent dialects of a language, such as the Argentine dialect Rioplatense Spanish, whose grammar rules and pronunciation differ from those of proper Spanish.

Abstract diction refers to discussing something intangible, like an idea or emotion. It’s hard to put abstract thoughts into words, so abstract diction often comes across as vague or ambiguous.

What you said doesn’t feel right.

The opposite of abstract diction is concrete diction, which uses specific and direct language with minimal ambiguity. Concrete diction describes things as they are, adhering to the proper definitions of words and citing only the facts.

I understand that you believe you are correct, but you are missing a necessary piece of information.

Poetic diction makes use of rhymes, rhythm, and phonetics to make words sound pleasing together. While it’s out of place in everyday speech and writing, it’s a necessary element of many creative outlets such as poetry, song lyrics, rap, and to some extent speechwriting.

What a foolish and ignorant thing you just said

Hear my rebuttal and your cheeks will burn red

In writing, diction refers to the words the writer chooses to use. The decision to use one word instead of another, even when they have similar meanings, changes the reader’s interpretation.

What is the purpose of diction?

What are the different types of diction?

There are a few different diction types, but the common ones include formal, informal, pedantic, pedestrian, slang, colloquial, abstract, concrete, and poetic.

How is diction used in writing?

Through word choice, diction effectively determines the style and tone of a piece of writing, making diction an important tool. It can also aid indirect characterization when applied to a character’s dialogue.