What is de facto? No, it’s not “the fact” with a silly Spanish accent. But did you guess that de facto means something about facts? Let’s see if you are right.

De facto comes from a Latin phrase meaning “in reality or as a matter of fact.” In legal contexts, de facto describes what really happens, in contrast with de jure, which explains what the law says should happen.

Let’s look at an example from a news article from The Baltimore Sun. A recent court decision approved granting rights to “de facto parents.” The same article describes how the Maryland Court of Appeals will define what a de facto parent is:

That the biological or adoptive parent consented to and fostered the third party’s parent-like relationship, that they lived together in the same household, that the de facto parent took on significant responsibility for the child’s care, education and development without expectation of financial reward, and the parental relationship lasted long enough for them to be bonded and the child to feel dependent . . . 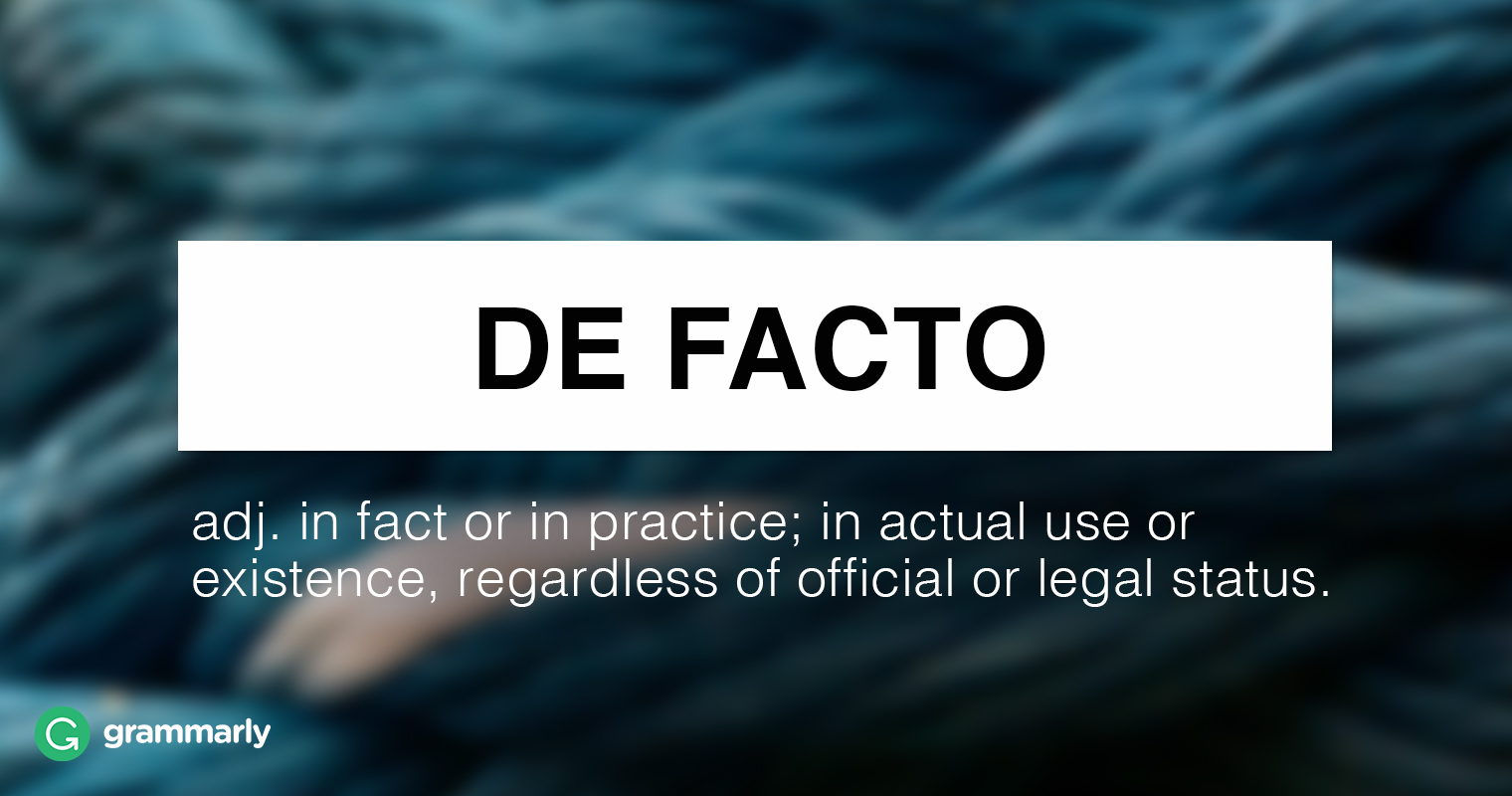 Therefore, a de facto parent is someone who lives with a child and fulfills parental duties. The de facto parent qualifies for the rights that the law accords to parents.

You can combine de facto with other titles to demonstrate that someone acts in a certain role without explicit authority to do so. Sometimes, a de facto situation results from socio-economic factors such as the de facto segregation that exists in some areas. De facto can also refer to things. Consider the following quote from Euronews.com that discusses the effect of the United Kingdom’s withdrawal from the European Union on its official language designations:

Now that the United Kingdom has decided to leave the European Union, the debate about English as the de facto official language of Europe is likely on the mind of many . . . “If we don’t have the UK, we don’t have English.” [Danuta] Hübner conceded that English could remain a working language even if it were stripped of its ‘official’ status.

Let’s take a moment to talk about how to write it. Occasionally, you might see de facto written with a hyphen between the two words (de-facto). However, this hyphen is unnecessary. Should you write de facto with italics? Not unless you’re trying to make the words stand out for some reason (as we are in some places in this article). According to The Chicago Manual of Style, you don’t need italics for foreign language words that your readers will find familiar. De facto comes from Latin, but English speakers have used it for centuries. Is it still foreign? The same style guide suggests checking an English dictionary for the term in question. If it appears there, it can safely be written without italics. Is de facto listed in your dictionary?

Now, you are all set to use de facto. You know that it means “in fact or in reality.” You know how to use it. Congratulations if you guessed that it had something to do with facts. There’s only one piece of knowledge you might still be missing. How do you say “the fact” in Spanish?