Beautiful German Words We Use in English 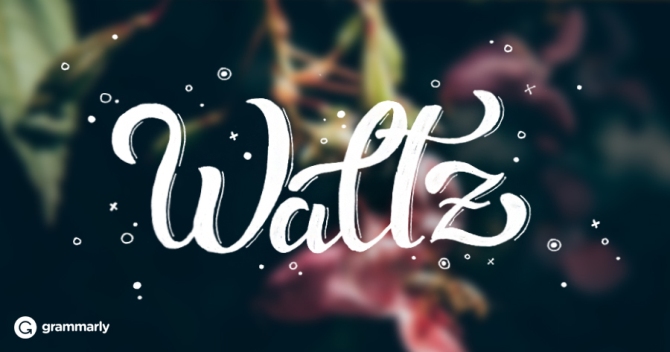 Budweiser gets its name from a German city. Volkswagen means “people’s automobile,” a nod to its affordability. Besides brand names like Volkswagen and Budweiser, you might not think you know many words in German. However, there are many interesting words of Germanic origin in English. Here some of the loveliest specimens.

The waltz is a 3/4 time ballroom dance in which the dancers move in a circular pattern around the floor. Peasants in the eastern Alps of Germany began dancing the Walzer in the 1750s, and it soon spread across Germany and abroad. The quick beat and seemingly effortless movements of the dance inspired a few informal expressions too. To waltz can mean to move casually or to progress easily through a task: the Olympian waltzed his way to victory with the nearest second trailing a full fifteen seconds behind him. In fact, any easily accomplished task is sometimes called a waltz.

Cobalt is sometimes a component of rich blue pigment, but the metallic element itself is actually silvery white with hints of pink. The name derives from Kobold, the name of a mythical being reputed to haunt basements, mines, and other underground places. What’s the connection between kobolds and this element? Miners often discovered the metal in rock deposits laced with traces of arsenic and sulfur. After becoming ill from these poisonous substances, some miners concluded that mischievous kobolds must be responsible.

Edelweiss is a flower lovely in both name and substance. The Germans agreed; its composite name is from edel (noble) and weiss (white). This cheery little blossom grows high in the Alps. It’s also the name of an Italian liqueur made from alpine flowers.

Speaking of the Alps, you should also know the special word for the dazzling sunrises and sunsets that illuminate the mountain ranges. The alpenglow, from the German Alpenglühen, is a warm, reddish light that lingers for a few moments after the sun has disappeared from the horizon. If you have the opportunity to watch an alpine daybreak, look for this unique phenomenon.

Lots of yummy foods come out of Germany, but one dessert is a favorite in this country—strudel. Strudel comes from the German word for whirlpool. You see, to prepare the pastry, you spread a fruit, nut, or cheese mixture onto thin sheets of dough. Then, you roll the dough to create the spirals of flavor that inspired its name.

We retain the German names of many works of art and music, including the famous Eine kleine Nachtmusik by Mozart. Some translate it as “a little night music,” but the more widely accepted translation is “a little serenade.” We can also thank the Germans for the names of at least three popular dog breeds. When it comes to cool German loan words, the ones mentioned here are just the tip of the Eisberg, or as you know it, the iceberg. Why not research what’s below the surface of your favorite German word?