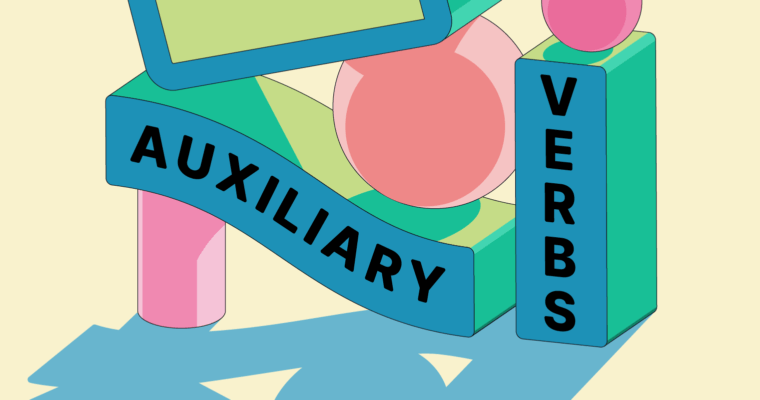 Auxiliary verbs, also known as helper verbs or helping verbs, are minor verbs that support the sentence’s main verb to communicate complex grammar concepts like aspects of time or modality. For example, in this sentence, “I have finished the report,” the auxiliary verb have supports the main verb finish.

Auxiliary verbs can be confusing, so we explain everything you need to know below. We share examples of common auxiliary verbs and explain when and how to use them. We also cover modal auxiliary verbs, a special type of auxiliary verb that changes the grammatical mood of the verb.

What is an auxiliary verb?

Auxiliary verbs are a type of verb that takes a supportive role in a sentence, second to the main verb. They’re used mainly to create complex grammatical tenses, like the perfect and continuous tenses, which show different aspects of time, or how long an action takes place.

We cover a complete list of which tenses use auxiliary verbs below.

Aside from tense and aspect of time, auxiliary verbs are also necessary for showing voice (active vs. passive voice) and are useful for adding special emphasis, such as through tag questions.

The three main auxiliary verbs are be, do, and have. However, all three of these can also be used separately as action verbs. When you see one of these verbs, look for a second verb to determine if it’s being used as an action verb or an auxiliary verb.

[action verb] I did my homework already.

[auxiliary verb] I did not want to go home.

[action verb] I have a selfie with Neil deGrasse Tyson.

[auxiliary verb] I have waited a long time for this.

What are modal auxiliary verbs?

Modal auxiliary verbs, or simply modal verbs, change the grammatical mood of a sentence. That means you can use modal verbs to express different meanings of the main verb, such as showing possibility (“It might rain”), ability (“It can rain”), necessity (“It must rain”), or suggestion (“It should rain”). Moreover, the modal verb will is necessary to express all future tenses (“It will rain”).

When using modal verbs, the main verb often takes either the participle form (past or present, depending on the usage) or the infinitive form without to, known as the bare infinitive. In the examples below, notice how the main verb loses its conjugation (the –s at the end) when used with an auxiliary verb.

I may delete this later.

She may delete this later.

I have deleted this already.

She has deleted this already.

However, the modal verbs can and will both change for the past tense: can becomes could, and will becomes would (when discussing the future relative to the past).

When I was a kid, I could do somersaults without getting dizzy.

I didn’t know when we met that she would become my wife.

You can read the main article on modal verbs, linked above, for more detailed information on how to use them, including their constructions in the different tenses.

When do you use auxiliary verbs (tenses)?

All future tenses, including the simple future tense, show events that have not happened yet but will happen later. Unlike the past and present tenses, the future tense alone does not follow subject-verb agreement, so you don’t have to worry too much about conjugation. Simply use the modal auxiliary verb will before the bare infinitive form (without to) of the main verb.

She will be the first astronaut president of Mars.

The continuous tenses use a conjugated form of the auxiliary verb be along with the present participle (-ing form) of the main verb.

I am working in the shed.

She was studying all night.

They will be sleeping when you arrive.

The perfect tenses use a conjugated form of the auxiliary verb have along with the past participle form of the main verb.

They have just finished class and are getting ready for recess.

I had forgotten about the birthday party until I saw the calendar.

By the time you get off work, the movie will have started already.

Perfect continuous tenses (be and have)

I have been reading Moby Dick for months now.

He had been working there for five years before he quit.

Tomorrow, we will have been dating for an entire year.

Other uses for auxiliary verbs

Auxiliary verbs aren’t just used for verb tenses. They also play vital roles in a variety of other functions in English, listed below.

In negative statements using the word not, use a conjugated form of the auxiliary verb do together with the bare infinitive of the main verb.

We did not hear the bell.

Using the negative word never does not require an auxiliary verb.

Modality, where “modal verbs” get their name, refers to the different grammatical moods a sentence can take. More often than not, modality refers to hypothetical situations: actions that haven’t actually happened but could.

Different modal verbs are used to show different grammatical moods. Refer to our modal verbs guide for specific details on how to use them.

Standard sentences are generally written in the active voice, where the subject does the action. The passive voice, however, is when the doer of an action is not the subject.

[active] The man leads his dog.

[passive] The dog is led by the man.

The passive voice is constructed with the conjugated form of the auxiliary verb be and the main verb in the past participle. There’s usually a prepositional phrase as well to explain who does the action; in the example above it’s “by the man.” Keep in mind that only transitive verbs can be used in the passive voice.

Yes/no questions (do, have, and modal verbs)

Did you take the dog out?

Can you come to the movie tonight?

Have you eaten yet?

Tag questions are when you add a small question to the end of a statement to confirm if it’s true.

The park is closed tomorrow, isn’t it?

The game is still going, isn’t it?

You have been eating all the peanut butter, haven’t you?

She won’t quit, will she?

If the statement does not use a tense with an auxiliary verb or the verb be, the tag question uses a conjugated form of the generic auxiliary verb do.

Your boyfriend wants to come, doesn’t he?

If the statement uses a modal verb, the modal verb is repeated in the tag question.

They can’t swim, can they?

Lastly, the auxiliary verb do can be added to a sentence for emphasis as a way to show that the speaker enthusiastically agrees or to correct a wrong statement. In this construction, conjugate the verb do and use a bare infinitive of the main verb.

Did your mom find the mess?

She did find it.

You probably don’t want to come.

I do want to come!

What is an auxiliary verb?

Auxiliary verbs are minor verbs that support the main verb and are usually used to create different verb tenses. For example, the present perfect tense uses the auxiliary verbs have or has (“She has already left”).

What are modal auxiliary verbs?

Modal auxiliary verbs are a subtype of auxiliary verbs used to show modality, such as making a  suggestion (“You should eat more”) or showing possibility (“He can swim”).

When should you use auxiliary verbs?

Auxiliary verbs have a variety of uses. They’re most common in particular tenses, specifically the future, continuous, perfect, and perfect continuous tenses. Additionally, they’re used for all cases of modality as well as special constructions like tag questions or the passive voice.