Parents have been proud of kids for getting through school since ancient times, and that means the words for people who graduate come from Latin. After all, graduation is a momentous occasion: the students stand, faces shining, in their long gowns and funny-shaped hats. “Pomp and Circumstance” plays. The accomplished scholars walk across the stage, and as they accept their diplomas, words like “pupils” and “learners” fade into memory. That’s where all those big Latin terms come in. But how do you use alumni correctly? And what about the related words alumna, alumnus, and alumnae? And come to think of it, what the heck is an alum?

When to use alumni

Alumni: Graduates or former students of a particular educational institution; former members, employees, contributors, or the like. 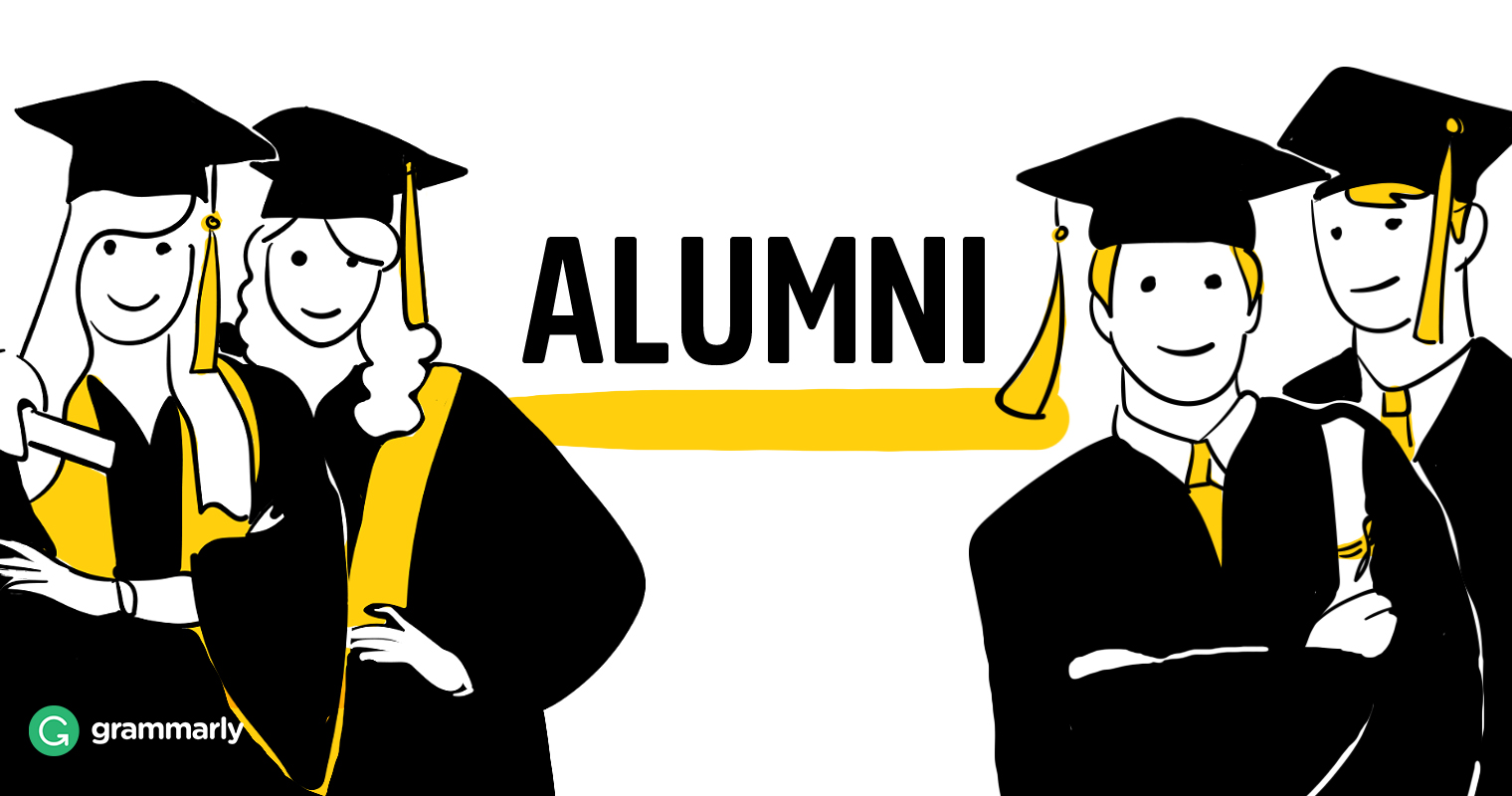 Technically, alumni is the masculine plural form of the noun, but it can be used for either a group of mixed gender or a group of men. That’s because Latin grammar has a lot more distinctions based on gender than English grammar does. When Latin had its heyday a few thousand years ago, men were the default category. Today, “alumni” is used to refer to pretty much any group of people who have graduated from somewhere.

Here’s “alumni” in a sentence:

“It is as true today as it was in Chaucer’s time that there is a class of men who ‘gladly learn and gladly teach,’ and our college trustees and overseers and rich alumni take advantage of this and expect them to live on wages which an expert chauffeur would regard as insufficient.”

―A. Edward Newton, A Magnificent Farce And Other Diversions Of A Book Collector

When to use alumna, alumnus and alumnae

Alumna is the feminine singular form of the noun. If you’ve got one female graduate, former member, or no-longer employee, this is your word. 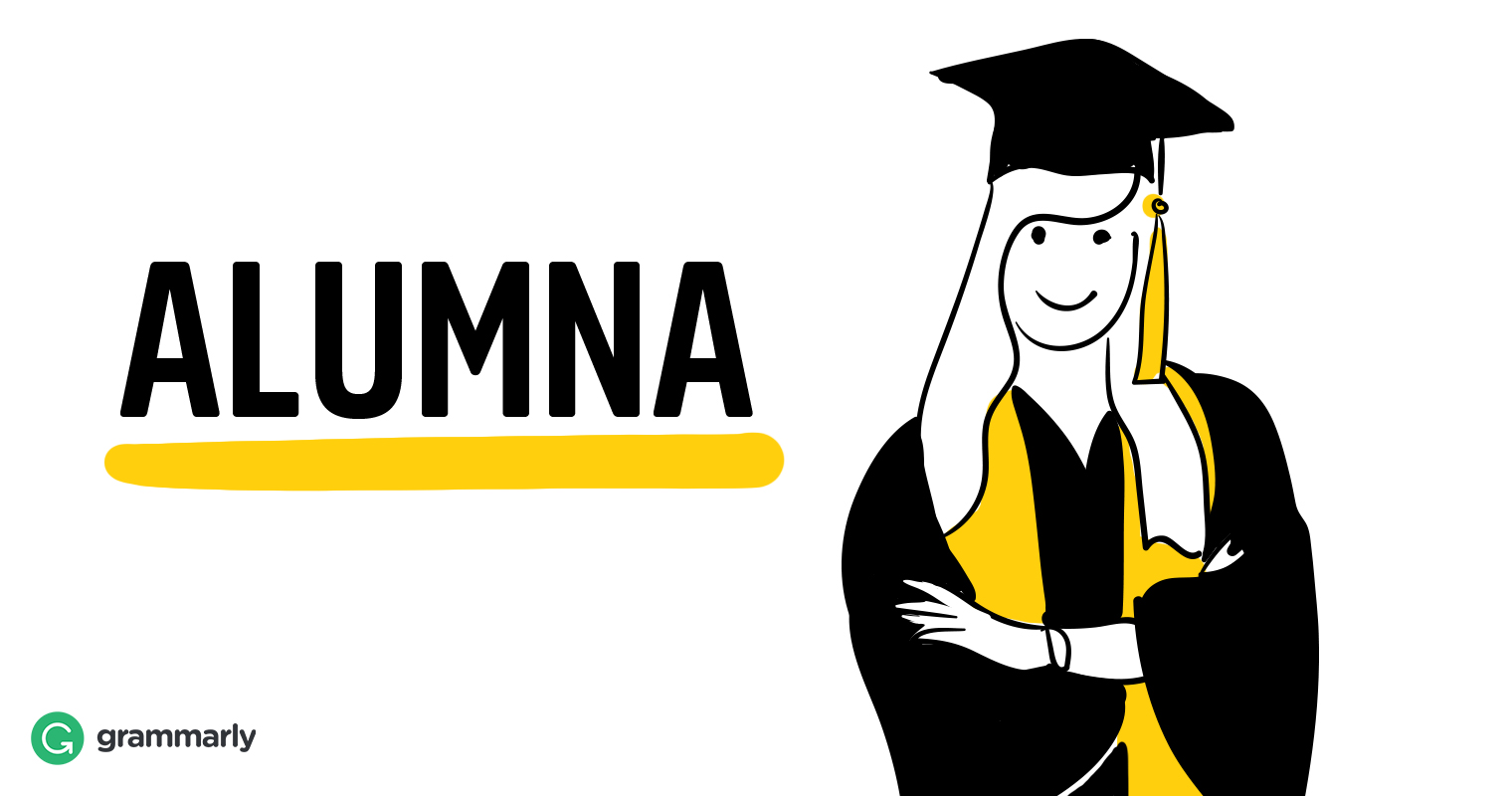 An example of alumna:

“Sophie grinned. If he thought she was a member of the ton, an alumna of dozens of balls and parties, then she must be playing her role to perfection.”

―Julia Quinn, An Offer from a Gentleman

Alumnus is the masculine singular form. Unlike “alumni,” which can refer to a group of male graduates or to a mixed-gender group, alumnus is usually reserved for the boys. At least, if you’re a stickler for using ancient Latin in modern English. 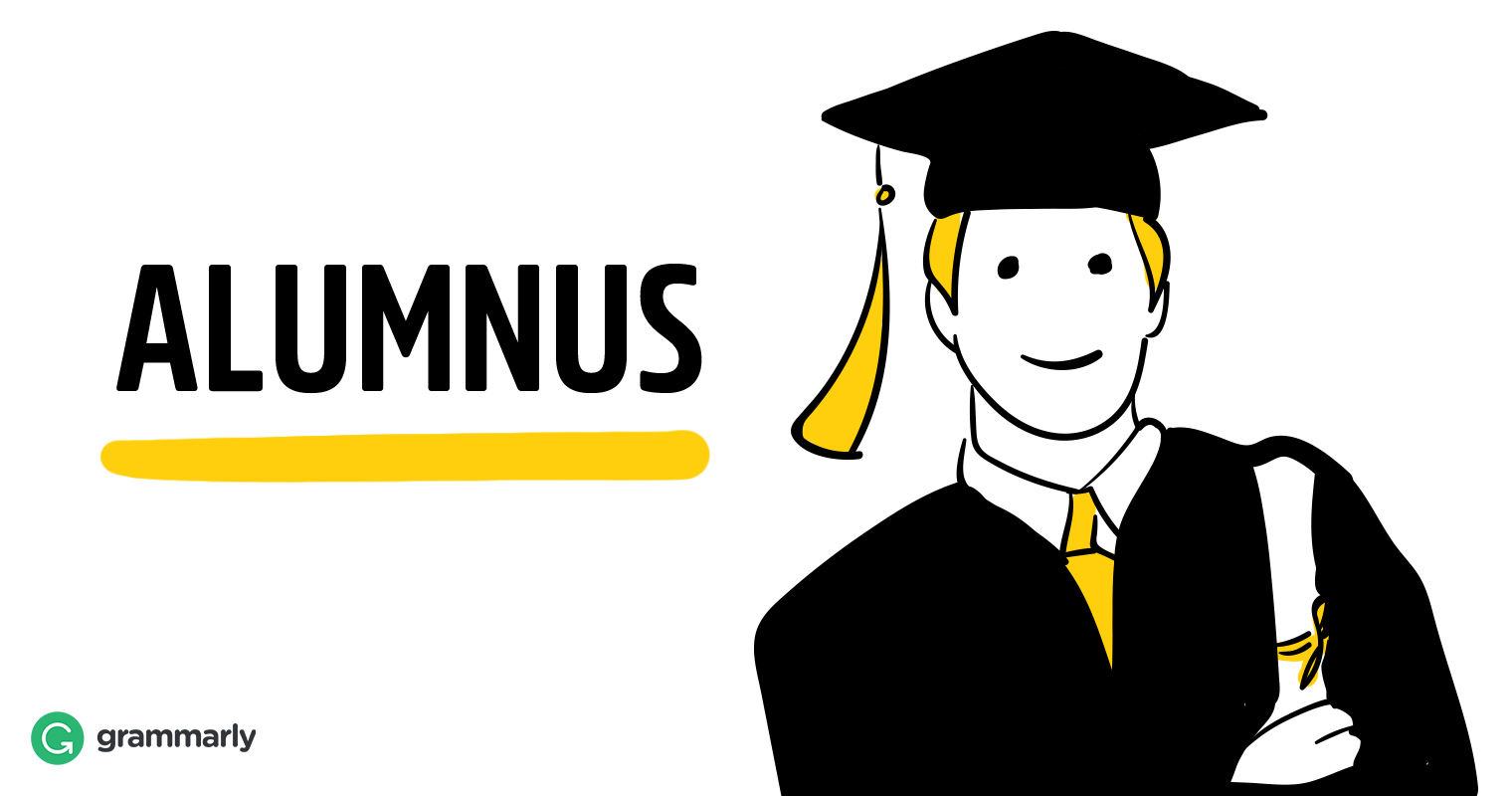 Here’s an example of alumnus in a sentence:

“If ever there was a shining alumnus from the school of hard knocks, it is I.”

Alumnae is the feminine plural form, used for groups of women.

Maybe you’re at an all-girls school, or maybe the boys in the class all dropped out. If you have to refer to a group of girls, women, or ladies who have moved on from studenthood, this is the word for you. 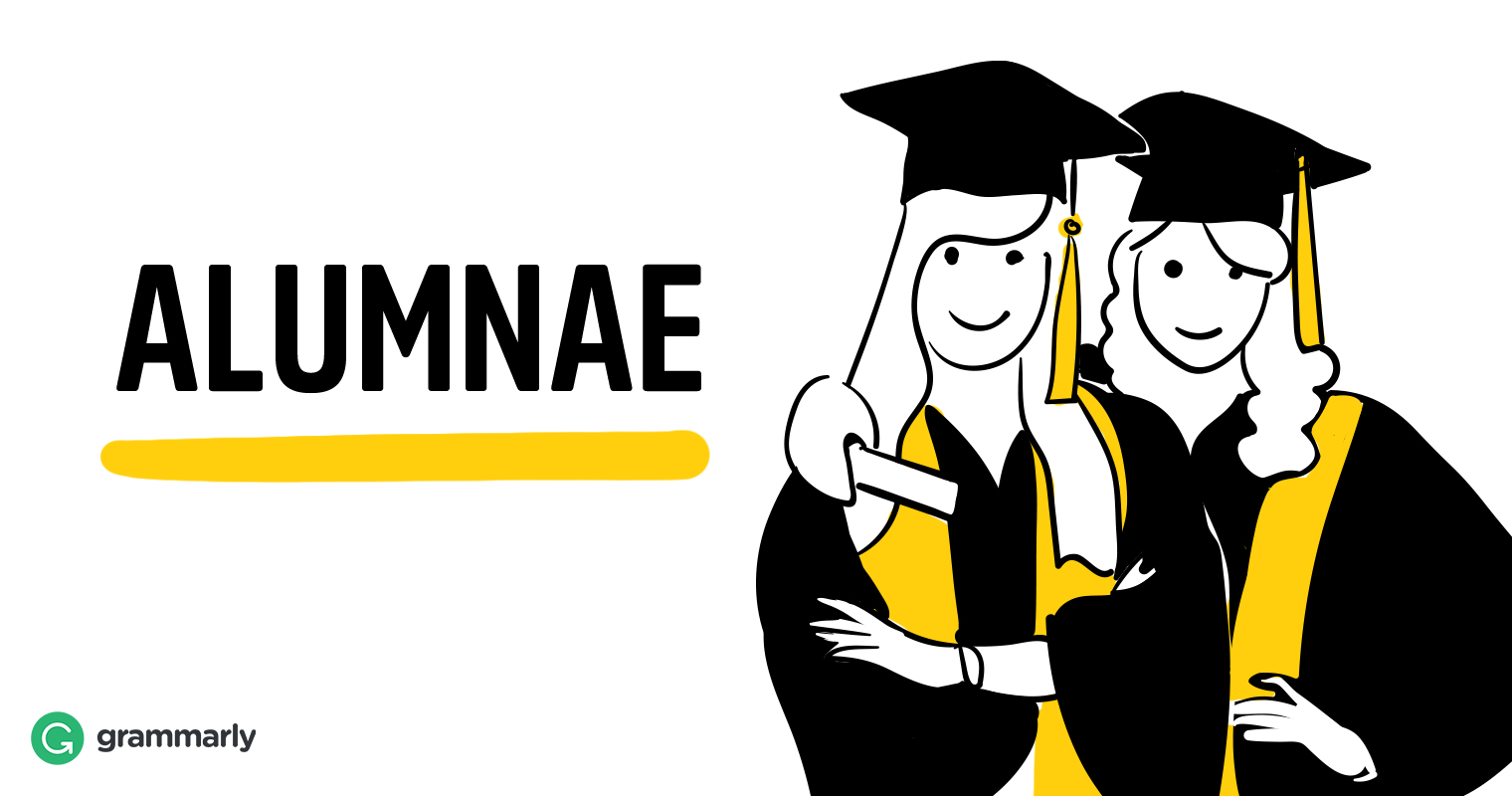 “The stone seal is indelible, consecrated by the generations of alumnae who have passed by, understanding and believing. No outsider, no matter how cunning, can ever steal that belief away.”

―James Klise, The Art of Secrets

Of course, all those forms are difficult to remember. That’s why “alum” eventually popped up as a shortened unisex form. At first, “alum” was frowned upon as extremely informal, but more and more, it’s becoming accepted as a replacement for all of the longer and more gender-specific Latin words. Why? Because two syllables are easier than three, and unspecified gender is easier than using a language that isn’t spoken anymore—which is probably in part because it insisted on far too many distinctions between singular and plural, male and female. So, more and more, folks see it as an acceptable gender-neutral option.

The plural form of alum? That’s right: alums. If you form an English word by chopping off its Latin endings, it’s only fair to add an “s” as the English signal for plural. Still, even as “alum” becomes more frequent as a singular form of the word, “alumni” remains the most commonly used plural form of the noun—no matter whom you’re referring to.

An example of alum:

“Minnesota governor may be funny, but he’s no ‘SNL’ alum. Uffdah!”

But watch out: alum is also used as a shortcut for referencing aluminum. Don’t get your college graduates mixed up with your chemical elements.

So, let’s get into the linguistic history. Just why does this word have so many forms? Why do the plural forms end in I or E? To reiterate: they come from Latin, that’s why! In Latin, the verb alere, meaning “to feed or support,” contributed to the term alumnus. It referred to a foster son, a pupil, or a nursling.

Now that you’ve had your linguistic history lesson, keep in mind that “alumni”—whether college alumni, high school alumni, or alumni of a great TV show—remains the most common form in the “alum+” family. At the risk of being viewed as incorrect, some people use alumni regardless of gender or number. But remember: alumni is always plural. You have alumnus and alumna—or if you don’t like gender discrimination, alum—to cover your singular noun bases.

A couple of examples for the road, along with a lesson:

“A Google search for ‘he is an alumni’ gets nearly three million hits, ‘she is an alumni’ almost a million more. But I maintain they’re all wrong. Why? Because alumni is plural. You, an individual, can’t be an alumni any more than you can be a students.”

―Charles Pettigrew, “Why You’ll Never Be an Alumni”

“Nathan and Maxie’s trip to the altar is bound to get bumpy now that One Life to Live alum Bree Williamson (ex-Jess, Tess et al) has said oui to the role of General Hospital’s Claudette.”

Congratulations, graduates! What shall we call them—alumnus for a male, alumna for a female, alumni for a group of males or mixed gender, and alumnae for a group of females? Or should we simplify the process by opting for the gender-neutral term “alum”? No matter which term you use to refer to former students or members of an exclusive group, you can be proud of their achievements!