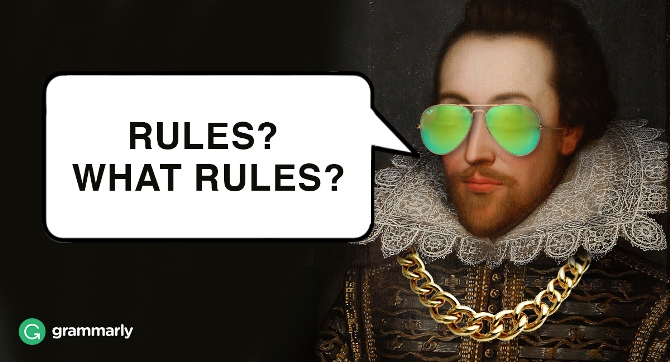 Rules are made to be broken; grammar rules are no exception. The argument for breaking grammar rules is that you can enhance the intensity, voice, and style of your writing by ignoring them, whereas policing yourself about grammar can feel like stepping on the accelerator and the brake at the same time. You want the words to flow freely, but you stop yourself along the way. Bending the rules, on the other hand, can add life and vigor to your writing. Here are six authors who have broken grammar rules to great effect.

Shel Silverstein, the poet, children’s book author, and cartoonist, whose works have sold over 20 million copies, was known for his laid-back, conversational style, which you can see in his poem “Crowded Tub” from A Light in the Attic.

Silverstein disregards subject-verb agreement by using the contraction there’s instead of there are. The subjects kids and elbows are plural, so the verb should also be plural (are). But the use of there’s makes the poem conversational and casual, which fits with Silverstein’s illustration of a tumble of limbs and appendages sticking out of a bathtub.

James Joyce’s Ulysses famously concludes with Penelope, or Molly Bloom’s Soliloquy, which has 24,048 words punctuated by two periods and one comma. Here’s a part of the final episode:

If you find this difficult to follow, you’re not alone. At the time of writing, this soliloquy contained the longest sentence ever written at 4,391 words, which made it the master of all run-on sentences. Run-on sentences often consist of independent clauses that are joined by conjunctions (and, but, or) but are missing commas before the conjunctions. Independent clauses that should end with a period but have a conjunction instead are also run-ons.

Another example of the use of run-on sentences comes from Lewis Carroll’s Alice in Wonderland, the fantasy novel that follows a girl’s adventures through a wondrous world.

“It was all very well to say ‘Drink me,’ but the wise little Alice was not going to do that in a hurry. ‘No, I’ll look first,’ she said, ‘and see whether it’s marked “poison” or not’; for she had read several nice little histories about children who had got burnt, and eaten up by wild beasts and other unpleasant things, all because they would not remember the simple rules their friends had taught them: such as, that a red-hot poker will burn you if you hold it too long; and that if you cut your finger very deeply with a knife, it usually bleeds; and she had never forgotten that, if you drink much from a bottle marked ‘poison,’ it is almost certain to disagree with you, sooner or later.”

If we reworked this sentence with punctuation in order to remedy the run-on problem, it would take away from Alice’s childlike recollection of rules about what not to do. As it stands, the reader can imagine Alice recalling what she learned until she concludes at the most relevant final rule. If we broke up the run-on by replacing the instances of and with periods, it wouldn’t have the same voice.

Jane Austen used double negatives to demonstrate the pretentiousness of her characters. A double negative occurs when two forms of negation occur in the same clause, as in “I don’t not want to go,” which means “I want to go.” In Emma, Austen wrote, “She owned that, considering every thing, she was not absolutely without inclination for the party.” This is a backward way of saying that she wanted to go to the party.

Jane Austen also used they, their, and them to describe a singular antecedent a total of seventy-five times in her novels. In Mansfield Park, which contains forms of the singular they twenty-four times, she wrote, “I would have every body marry if they can do it properly: I do not like to have people throw themselves away; but every body should marry as soon as they can do it to advantage.” One reason for using they in this way is to express indefiniteness in a general way.

Incomplete sentences, slang, beginning a sentence with a conjunction

In The Brief, Wondrous Life of Oscar Wao, Junot Diaz uses slang and nonstandard grammar as he tells the story of Oscar de Leon, a Dominican boy who lives in New Jersey. An excerpt from the book reads: “Our hero was not one of those Dominican cats everyone’s always going on about—he wasn’t no home-run hitter or a fly bachatero, not a playboy with a million hots on his jock. And except for one period early in his life, dude never had much luck with the females (how very un-Dominican of him). He was seven then.”

If we were to edit this passage according to grammar and punctuation rules and remove the slang, it would lose its authenticity and voice. For example, one grammar convention violated here is to not begin a sentence with a conjunction, as in “And except for one period…” because the reader may search for the connecting idea. Using and at the beginning of a sentence is informal, which is the author’s intention here, but if we were to correct it, it would read, “Except for one period…” This weakens the conversational tone of the passage.

If rules are made to be broken, then what’s the point of learning grammar rules? You have to know what the rules are in order to break them, so there’s no way to get around understanding proper grammar. Learning the rules well and knowing how to apply them may lead you to infinitely more inventive ways of breaking them.