5 Writing Rules that Should Be Ignored 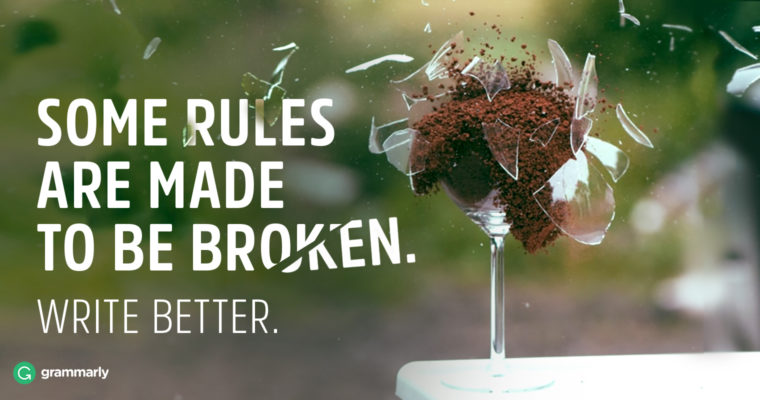 We are often told how we should and shouldn’t write. We’ve all heard the so-called rules. But in this day and age, do they even matter anymore?

Language is dynamic, and how we use it is constantly evolving. Due to the space and style constraints of texting, tweeting, slogans, and brand names, modern-day copywriters and content marketers do not have the luxury of concentrating on grammar. I am here to argue that it would be a waste of time even if they did.

The time spent arguing over the correct use of whom or who is irrelevant in a world where numbers routinely replace letters and words. Grammar guidelines are more of a reference to be used when in doubt, not as a rule. If you’re confident in your ability, you can use language however you want.

However, you should always remember that the content you produce is a reflection of your brand, as is your choice of vocabulary. In most cases, you want to be professional, and there is a certain threshold of professional writing.

This doesn’t mean you can’t break a few rules along the way. Here are five grammar “rules” you can break:

”1” You Should Avoid Passive Voice

Yes, we all know passive voice is seen as boring, weak and disingenuous. The term passive voice may bring to mind a passive-aggressive (ex-) girlfriend or boyfriend who gives you the silent treatment. But passive voice can be useful when a sentence’s actor is abstract, unknown or collective. The bad reputation comes from politicians who say things like “mistakes were made” instead of “we made mistakes.” In this case, the use of passive voice seems cowardly.

”2” You Must Write in Complete Sentences

This is a good advice when you’re writing an essay or research paper, without a doubt. Other than that, it is not relevant. Take a look at marketing slogans. Are they written in full sentences? No, and neither are product descriptions, email headings, or title tags. The list goes on and on.

Take a look at Buzzfeed. They blast sentence fragments and bullet points left and right to get across as much information as possible in just a few words. Modern-day readers don’t have time to explore every idea, and most definitely don’t have time to read a whole essay.

On a more subjective note, some people condemn one-word sentences, but personally I see nothing with more oomph than a one-word sentence. Calls to action, sound effects, or strong emphasis can be conveyed perfectly with one-worders. As long as you don’t beat it to death, there’s no reason for the hate. So, just stop. Please.

”3” You Should Never Verb a Noun

Are you sure? Google it.

Don’t worry, that wasn’t an instruction. It’s an example. Google is a brand, but it’s also synonymous with searching the web.

We constantly verb our nouns. Vacuum the floor, tape a sound bite, text your friend. The list goes on. Sometimes we even noun our verbs. Did you know the verb form of impact actually existed first? The noun form didn’t come along until almost 200 years later! You understand what I am trying to say. Language develops and changes.

”4” Don’t Start Sentences with And or But

But what if it flows better that way? Avoiding these words might lead to redundant clauses or phrases, leaving your sentences awkward and wordy. Stylistically speaking, the occasional use of a conjunction at the beginning of a sentence can be very versatile and effective.

This mantra made sense back in elementary school when the teacher wanted to prevent listed narratives (and then this, and then that…). But we’re no longer in school. Sentences take meaning from their context — the sentences and paragraphs around it. Acclaimed novelists have been starting sentences with conjunctions for generations.

And to conclude, why do people stop at and and but? However, while, yet, then, nevertheless, also, by, and unless are all widely used.

”5” You Shouldn’t End Sentences with Prepositions

Then what should we end our sentences with?

This is definitely a guideline. The basis of this guideline is archaic and following it will make your writing style archaic. Take the sentence above. If we rewrote it to follow this “rule,” it would become: With what should we end our sentences?

Some prepositions just float to the end of some sentences. But hey, that’s ok. Especially in content, we don’t want to seem snobbish or aloof. We want to appeal to the masses.

At the end of the day, we write for our readers. So, in most cases, we should write the way we speak and not the way the “grammar police” insist on.

Jacky is an engineer, digital marketer and has extensive experience with a Stapler. He founded Indexsy — Vancouver SEO and Marketing Consulting, providing a no-nonsense SEO resource site as well as a place to market his digital marketing services. When he isn’t off being a goof, you can find him writing in-depth SEO and Content Marketing guides on Indexsy.com.