A Guide to Writing Dialogue, with Examples 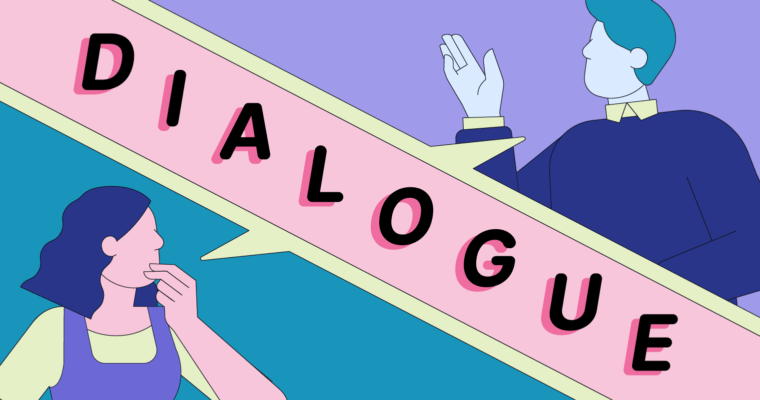 “Guess what?” Tanika asked her mother.

“What?” her mother replied.

“Make sure you practice writing dialogue!” her mother instructed. “Because dialogue is one of the most effective tools a writer has to bring characters to life.”

What is dialogue, and what is its purpose?

Dialogue is what the characters in your short story, poem, novel, play, screenplay, personal essay—any kind of creative writing where characters speak—say out loud.

For a lot of writers, writing dialogue is the most fun part of writing. It’s your opportunity to let your characters’ motivations, flaws, knowledge, fears, and personality quirks come to life. By writing dialogue, you’re giving your characters their own voices, fleshing them out from concepts into three-dimensional characters. And it’s your opportunity to break grammatical rules and express things more creatively. Read these lines of dialogue:

Dialogue has multiple purposes. One of them is to characterize your characters. Read the examples above again, and think about who each of those characters are. You learn a lot about somebody’s mindset, background, comfort in their current situation, emotional state, and level of expertise from how they speak.

Another purpose dialogue has is exposition, or background information. You can’t give readers all the exposition they need to understand a story’s plot up-front. One effective way to give readers information about the plot and context is to supplement narrative exposition with dialogue. For example, the protagonist might learn about an upcoming music contest by overhearing their coworkers’ conversation about it, or an intrepid adventurer might be told of her destiny during an important meeting with the town mystic. Later on in the story, your music-loving protagonist might express his fears of looking foolish onstage to his girlfriend, and your intrepid adventurer might have a heart-to-heart with the dragon she was sent to slay and find out the truth about her society’s cultural norms.

Dialogue also makes your writing feel more immersive. It breaks up long prose passages and gives your reader something to “hear” other than your narrator’s voice. Often, writers use dialogue to also show how characters relate to each other, their setting, and the plot they’re moving through.

It can communicate subtext, like showing class differences between characters through the vocabulary they use or hinting at a shared history between them. Sometimes, a narrator’s description just can’t deliver information the same way that a well-timed quip or a profound observation by a character can.

In contrast to dialogue, a monologue is a single, usually lengthy passage spoken by one character. Monologues are often part of plays.

The character may be speaking directly to the reader or viewer, or they could be speaking to one or more other characters. The defining characteristic of a monologue is that it’s one character’s moment in the spotlight to express their thoughts, ideas, and/or perspective.

Often, a character’s private thoughts are delivered via monologue. If you’re familiar with the term internal monologue, it’s referring to this. An internal monologue is the voice an individual (though not all individuals) “hears” in their head as they talk themselves through their daily activities. Your story might include one or more characters’ inner monologues in addition to their dialogue. Just like “hearing” a character’s words through dialogue, hearing their thoughts through a monologue can make a character more relatable, increasing a reader’s emotional investment in their story arc.

There are two broad types of dialogue writers employ in their work: inner and outer dialogue.

Outer dialogue is dialogue that happens externally, often between two or more characters. This is the dialogue that goes inside quotation marks.

How to structure dialogue

Dialogue is a break from a story’s prose narrative. Formatting it properly makes this clear. When you’re writing dialogue, follow these formatting guidelines:

Things to avoid when writing dialogue

How to write dialogue

Write how people actually speak (with some editing)

You want your characters to sound like real people. Real people don’t always speak in complete sentences or use proper grammar. So when you’re writing dialogue, break grammatical rules as you need to.

That said, your dialogue needs to still be readable. If the grammar is so bad that readers don’t understand what your characters are saying, they’ll probably just stop reading your story. Even if your characters speak in poor grammar, using punctuation marks correctly, even when they’re in the wrong places, will help readers understand the characters.

“I. Do. Not. WANT. to go back to boarding school!” Caleb shouted.

See how the period after each word forces your brain to stop and read each word as if it were its own sentence? The periods are doing what they’re supposed to do; they just aren’t being used to end sentences like periods typically do. Here’s another example of a character using bad grammar but the author using proper punctuation to make the dialogue understandable:

“Because no,” she said into the phone. “I need a bigger shed to store all my stuff in . . . yeah, no, that’s not gonna work for me, I told you what I need and now you gotta make it happen.”

When you’re editing your characters’ dialogue, cut back all the parts that add nothing to the story. Real-life conversations are full of small talk and filler. Next time you read a story, take note of how little small talk and filler is in the dialogue. There’s a reason why TV characters never say “good-bye” when they hang up the phone: the “good-bye” adds nothing to the storyline. Dialogue should characterize people and their relationships, and it should also advance the plot.

Vary up your tags, but don’t go wild with them

“We love basketball!” he screamed.

“Why are you screaming?” the coach asked.

“Because I’m just so passionate about basketball!” he replied.

Dialogue tags show us a character’s tone. It’s good to have a variety of dialogue tags in your work, but there’s also nothing wrong with using a basic tag like “said” when it’s the most accurate way to describe how a character delivered a line. Generally, it’s best to keep your tags to words that describe actual speech, like:

You’ve probably come across more unconventional tags like “laughed” and “dropped.” If you use these at all, use them sparingly. They can be distracting to readers, and some particularly pedantic readers might be bothered because people don’t actually laugh or drop their words.

Give each character a unique voice (and keep them consistent)

If there is more than one character with a speaking role in your work, give each a unique voice. You can do this by varying their vocabulary, their speech’s pace and rhythm, and the way they tend to react to dialogue.

Keep each character’s voice consistent throughout the story by continuing to write them in the style you established. When you go back and proofread your work, check to make sure each character’s voice remains consistent—or, if it changed because of a perspective-shifting event in the story, make sure that this change fits into the narrative and makes sense. One way to do this is to read your dialogue aloud and listen to it. If something sounds off, revise it.

As I stepped onto the bus, I had to ask myself: why was I going to the amusement park today, and not my graduation ceremony?

He thought to himself, this must be what paradise looks like.

“Mom, can I have a quarter so I can buy a gumball?”

Without skipping a beat, she responded, “I’ve dreamed of working here my whole life.”

“Ren, are you planning on stopping by the barbecue?”

Dialogue is the text that represents the spoken word.

How does dialogue work?

Dialogue expresses exactly what a character is saying. In contrast, a narrator might paraphrase or describe a character’s thoughts or speech.

What are different kinds of dialogue?

Inner dialogue is the dialogue a character has inside their own head. Often, it’s referred to as an inner monologue.

Outer dialogue is a conversation between two or more characters.

How is dialogue formatted?

Outer dialogue is marked by quotation marks and a few other formatting guidelines. These include:

Writing TipsHow to Write a Haiku, with Examples

Writing TipsWhat Is Amplification in Writing?

Writing TipsA Guide to Writing a Cause and Effect Essay

Writing TipsPuns as a Literary Device, with Examples
Writing, grammar, and communication tips for your inbox.