What Is the Difference Between Acknowledgement and Acknowledgment? 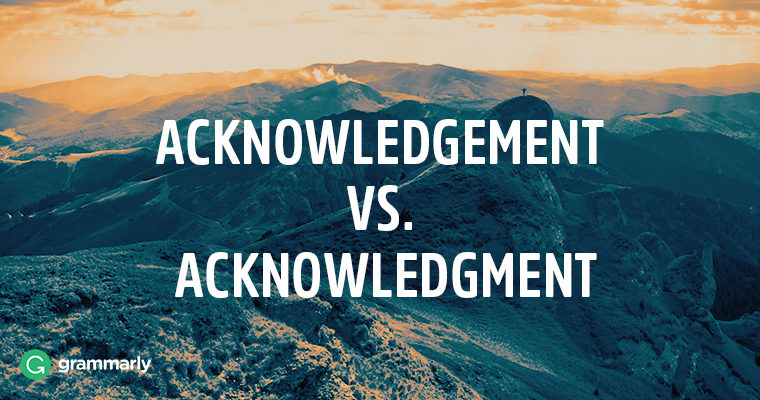 This post acknowledges the pesky spelling of acknowledg(e)ment. If the verb ends in -e, where does that letter go when you add the -ment?

For the most part, folks in the United States or Canada will ditch the E, while people outside North America tend to keep it. But that’s far from a hard-and-fast rule, so chances are you’ll see both spellings regardless of where you’re reading.

If you want to stick to general geographical standards, think of it this way: the British like to use extra letters. Think canceled vs. cancelled, or favorite vs. favourite, for instance—Americans prefer the former in both instances. While “judgment” is a closer parallel to our friend “acknowledgment,” more sources agree that “judgement” with a middle E is just plain incorrect. With “acknowledgment” and “acknowledgement,” on the other hand, you’ll see a lot more of both.

Now that we’ve given acknowledgment to geography, let’s take a peek at some of the most common usages of the word, with examples of both spellings.

The coach was not comforted by the referee’s acknowledgment that he had incorrectly given the star player a red card.

May 2, 1939, “marked the beginning of Gehrig’s very public acknowledgement of ALS, the disease which would come to bear his name.” (NBC Sports)

“The kingdom awaits the U.S. Government’s acknowledgment of error.” (The National Interest)

2 The act of recognizing the existence, authority, truth, or genuineness of a fact, point, or characteristic.

The financial analysts interpreted the warning about high spending “as an acknowledgment of their claim that taxes must rise.” (The Australian)

“Public acknowledgement of and commitment to diversification strikes a new tone, and suggests recognition of a new reality.” (Foreign Policy)

3 An award or other expression or token of appreciation.

“Each honoree receives a crystal paperweight commemorating the award and $3,345 as an acknowledgment of their superior leadership abilities, scholarship and appreciation of basic American values.” (The Purdue Exponent)

Young students often give their teachers an apple as an acknowledgment of their teaching.

4 An expression of gratitude or respect.

“What . . . came to pass on Wednesday night was a sober acknowledgement of Bowie’s talent and contribution to the music industry.” (WWD)

“Mr Khanna lists over 400 people in a nine-page acknowledgments section.” (The Economist)

5 A confirmation that something has been received.