All the Sports Words Only Americans Use 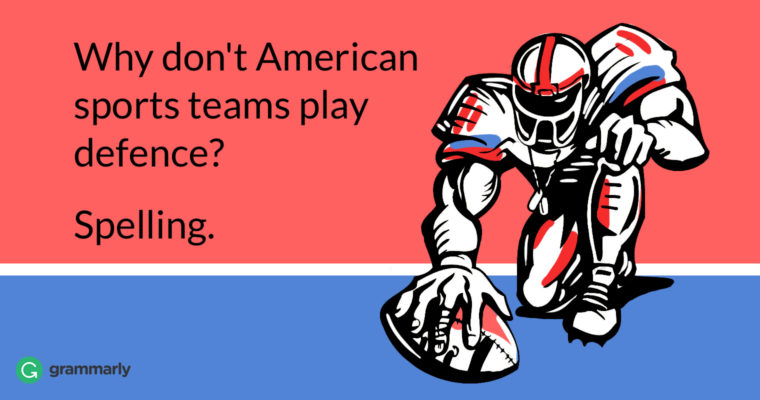 To many Americans, Super Bowl Sunday is synonymous with junk food, cheering, the best new commercials, and possibly the sensation of winning (or losing) a war. People in other countries sometimes wonder if the prize is a very large bowl.

It’s not just the fascination with football that befuddles non-Americans—it’s the very words we use to describe it. That goes for sports-related words in general, especially when we compare certain terms in American English to their British counterparts.

In other words, a Yank may queue for gridiron and go barmy in the stands as if he’s got bugger all to do but watch the match, but lads from Blighty think that’s bollocks. And if you don’t know what that means, we’ve got you covered with this handy list of American sports words and their British equivalents. If you just can’t get enough football (or if you secretly think words are more interesting), this is the list to get you through the sports event of the year.

Sports vs. Sport That’s right: the language barrier starts with what to call the whole category of athletics. Americans watch sports. British folk watch sport. We’ve got a lot of ground to cover.

Game vs. Match The Super Bowl is also called “the Big Game.” We can only assume a British championship would be called “the Oversized Match.”

Team vs. Club “My favorite football team is the Raiders,” says an Oaklander. “My football club is the Gunners,” says a Brit rooting for Arsenal (though someone from a rival team might call them “Gooners”). Another British football quirk: many fans call their teams—er, clubs—by nicknames rather than their official titles.

Defense vs. Defence It means the same thing: the opposite of “offense” (or if you’re in the U.K., “offence”). British English just spells some things differently. (Want more British spelling variations? Learn about canceled vs. cancelled, favorite vs. favourite, and other ways our Englishes are different.)

Shutout vs. Clean Sheet In the U.S., a “shutout” is a game in which one team doesn’t score at all. In the U.K., the goalkeeper (not goalie) is said to “keep a clean sheet” if he’s kept the other team’s score at nil.

Tie vs. Draw It could be zero-zero, nil-nil, or ten-ten (no changes there); if both teams have the same score at the end of the game, that’s called a “tie” for Americans and a “draw” for the British.

Field vs. Pitch The thing you play on, if you’re playing in the U.S., is a field. In the U.K., it’s a pitch—not to be confused by what a baseball pitcher (bowler) throws at a batter (batsman) in the game of baseball (that one’s still baseball, though Brits prefer cricket).

Sideline vs. Touchline Either type of line designates the boundaries of the field. Idiom bonus: if a player is unable to play, you can say “that player has been sidelined.”

Soccer vs. Football When Americans hear “football,” we think tackling, touchdowns, oval ball with pointy ends. When Brits (or really, anyone not from the U.S.) hear “football”—sometimes abbreviated to “footy”—they think fancy footwork, goals, round ball. In other words, what Americans call “soccer.” Fancy that.

Pig skin This word has no British equivalent. In American football, it’s what you call the actual ball. If you didn’t know that, “tossing around the pigskin” probably sounds pretty gross.

Gridiron For Americans, a gridiron is the field for football—so called because of the parallel lines marking up the grass. But British folks sometimes use the word “gridiron” to refer to the sport of American football as a whole. It rolls off the tongue nicer than “American football,” after all.

In the Six In soccer, some American commentators say “in the six” to refer to action in the six-yard box—that is, the area immediately around the goal. Not to be confused with…

Pick Six This term is specific to American football—that is, gridiron. It’s what happens when a quarterback throws an interception (or “pick”) and the defensive player throws it back, scoring a touchdown worth six points.

On Frame This is a football Britishism meaning “on target”—for example, a kick straight into the goal would be “on frame.” Americans don’t get it: in the words of one Florida-based soccer blogger, “For me it sounds like hitting the post or the crossbar, I wouldn’t think it was a shot on target.”

Upper 90 vs. Top Corner In soccer, this term refers to the top portion of the goal. American commentators refer to the right angle as the “upper 90” (as in, 90 degrees), and British ones content themselves with describing the general region.

Uniform vs. Kit What you wear to show what team (or club) you’re on.

Cleats vs. Boots (studs) These are what you put on your feet to run in turf. Americans refer to the shoes in general as “cleats,” but the actual cleats are the grippy bits on the sole. The grippy bits in British English: “studs.”

Sneakers vs. Trainers More on footwear: a good running shoe without the studs (or grippy bits) is called a “sneaker” in the U.S.; the British aren’t as big on sneaking, so for them, they’re called “trainers.”

Mouth Guard vs. Gum Shield You’d think that teeth would be more injury-prone. But if you’re in Britain, you protect your gums.

Words for the Fans

Remember this sentence? “A Yank may queue for gridiron and go barmy in the stands as if he’s got bugger all to do but watch the match, but lads from Blighty think that’s bollocks.” Let’s finish translating the Britishisms.

Queue This is what you stand in while you’re waiting to get into the stadium. Or the bathroom. Or if you want fries and beer (or at a British match, chips and a pint).

Barmy “Crazy.” Not necessarily certifiably insane, just a bit on the loony side.

Bugger All This translates to “nothing at all,” but be careful where you say it: it’s a bit vulgar as a phrase. You’re probably ok saying it on the soccer pitch, though.

Lads Let’s not stereotype: there are plenty of lasses (or girls) who are just as excited about a good day of sport. But say you’re with a group of fellows. They’d be dudes, guys, or bros in the U.S., but in the U.K., you’d call them “my lads.”

Blighty An affectionate term for England herself. The term showed up as a sign of patriotism and homesickness at the time of Victorian rule in India and grew in popularity in the early twentieth century, with songs like “Take Me Back to Dear Old Blighty” causing a tear in many a homesick soldier’s eye.

A lot of these words might sound like bollocks to American ears, but if you ever find yourself at a footy match in the U.K.—or are trying to explain gridiron to a lad from Blighty—now you’ll know where to start. Let the games begin!