What Are Singular Nouns, and How Do They Work? 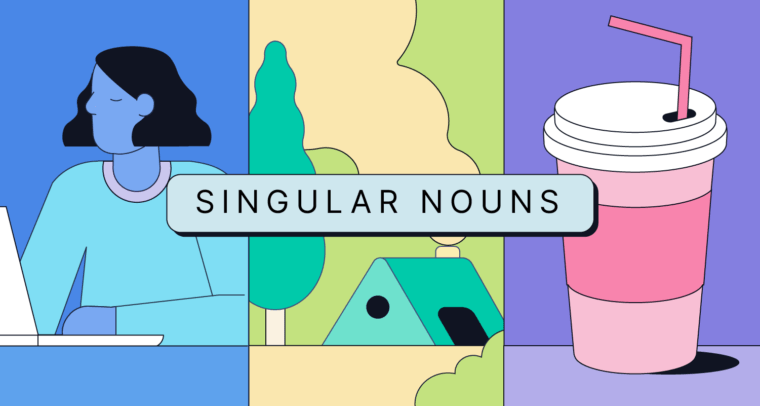 Singular nouns are pretty straightforward, but they can get tricky when you’re working with complicated singular nouns like mass nouns or collective nouns. So below, we explain singular and plural nouns and when to use each as well as give plenty of singular noun examples.

What is a singular noun?

All nouns represent people, places, things, or ideas. If the noun describes only one of these, such as one person or one place, then it’s a singular noun. If it describes more than one, such as two people or multiple places, then it’s a plural noun.

Singular nouns are the standard form of nouns, so you don’t have to add anything to make a noun singular. Plural nouns, however, are usually formed by adding an –s or -es to the end of a singular noun. Be careful, though, because a lot of irregular plural nouns don’t follow this rule.

When do you use singular and plural nouns?

In English grammar, if you are describing a single person, place, thing, or idea, you use the singular form of the noun.

If you are describing more than one of these, you use the plural form of the noun.

Singular nouns are simple enough because, unlike with plural nouns, you don’t have to add anything to them. However, singular nouns can get a little confusing when you’re dealing with mass nouns and collective nouns.

1 If a singular noun is the subject of a sentence, the verb must use the singular form.

With the exception of first- and second-person pronouns, most singular nouns use the third-person singular form of the verb. This typically involves adding an –s or –es to the end of the verb (you can read the detailed rules in the link above).

[plural] Maria and her family eat dinner at 7 p.m.

2 Large numbers like hundred, thousand, million, and billion are singular when specific and plural when general.

Large numbers might seem like they’d be plural, but they actually switch between singular and plural nouns based on their context.

Treat them as singular if they:

However, these numbers are plural if they are used in a general sense, without a specific or exact amount.

Mass nouns are always singular, even when they represent something that has many parts, like sand. This is especially important when it comes to subject-verb agreement.

[general & singular] Beauty is in the eye of the beholder.

[specific & plural] My grandmother’s jewelry collection has some beauties.

4 Collective nouns are singular when referring to one group but plural when talking about multiple groups.

Let’s look at the collective noun team, which represents more than one member. If you’re talking about one team, use team as a singular noun.

Our team works well together.

If you’re talking about more than one team, use team as a plural noun.

There are twenty-three teams in the tournament.

5  Quantities or amounts as a whole act as singular.

Plural nouns can act as singular if the context refers to them as a whole. This is typical for specific amounts of money and time.

Fifteen dollars is too much for streaming a movie.

The first two kilometers is the hardest part of the bike trail.

When the context refers to them as individual units, treat them as plural.

There are two kilometers left in the race.

The following singular noun examples may look plural, but they’re actually singular. Keep an eye out for them when writing.

What is a singular noun?

A singular noun is a noun that represents only one person, place, thing, or idea. Singular nouns are contrasted with plural nouns.

What’s the difference between singular and plural nouns?

When should you use singular nouns?

Use singular nouns when referring to only one of what the noun represents. Be careful with collective nouns and mass nouns—they represent multiple things as a whole but act as singular nouns.