Sentence Structure: Learn the Rules for Every Sentence Type 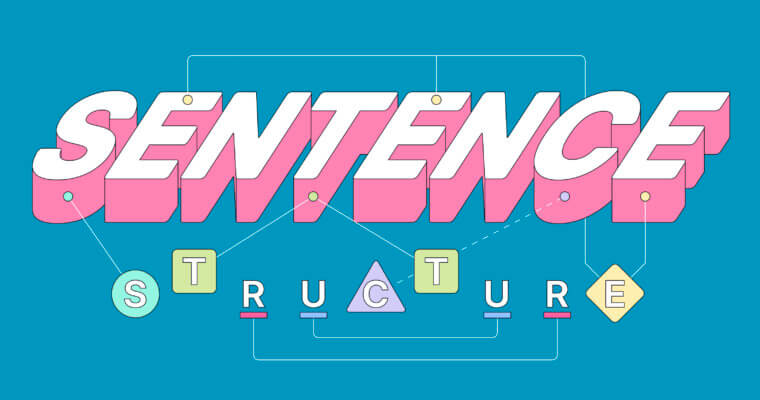 Below, we explain the rules for all types of sentence structure so that you can communicate clearly, correctly, and confidently. But before we dive into the details, let’s start by reexamining the basics.

Basic parts of a sentence

Every sentence requires at least a verb and a subject; a verb is an action, and a subject is the noun that does the action.

In this example, am waiting is the verb. The main verb is wait, but when we conjugate it in the present continuous, we use the –ing form and add the auxiliary verb am. The subject is I, the person who waits.

The exception to this rule is imperative sentences (commands), which only need a verb. We can assume the subject is the person the speaker is talking to.

This single word is a complete sentence. The verb is stop, and no subject is necessary because it’s a command.

Some sentences can add objects, which are nouns that also participate in the action. Let’s say you forgot your calculator and you ask your friend to borrow theirs.

My buddy lends me their calculator.

In this example, lends is the verb and my buddy is the subject because they’re the one lending. The word calculator is what’s called a direct object, the noun that receives the action. In this case, the direct object is the thing being lent—a calculator.

Did you notice that the subject uses the pronoun I but the objects use the pronoun me? Subject and object pronouns are different, so make sure you’re using the right one.

Let’s look at another example.

Aside from knowing the parts of a sentence, you also have to follow the grammar rules. In case you forget, here’s a quick list:

If every sentence were as simple as subject + verb + object, books would be so boring! That’s why English has developed a few different sentence structures to keep things interesting and give us more options for speaking and writing.

Before we get into those different sentence structures, it’s crucial to understand how clauses work. A clause is a group of words that contains a subject and a verb. Sometimes a clause is a complete sentence on its own, but other times it needs help before it expresses a complete thought.

Faria and Bertuccio assisted the Count of Monte Cristo.

A clause that is not a complete sentence is called a dependent clause, or subordinate clause. These support independent clauses, usually by adding necessary information.

The roads are icy because it rained last night.

This sentence contains two clauses: (1) The roads are icy and (2) because it rained last night. Each sentence has a subject (the roads & it) and a verb (are & rained), but only the first clause is a complete sentence by itself.

Notice that the subordinate clause because it rained last night slightly changes the meaning of the first sentence by adding new and important information. That’s the main purpose of subordinate clauses—to improve an independent clause with essential details.

Although subordinate clauses have both subjects and verbs, they cannot exist on their own. They contain special words called subordinating conjunctions, which connect them to independent clauses.

Common subordinating conjunctions include because, since, although, unless, and while, as well as relative pronouns like that, which, whatever, whenever, whoever, etc.

Depending on how you combine clauses, you can create four different types of sentence structure:

Note: Sentences are also categorized by their function, i.e., declarative, interrogative, exclamation, and imperative. These are separate from the types of sentence structure (complex, compound, etc.), and the two categories can be mixed and matched. To read more about each, check out our guide on the types of sentences.

Let’s take a deeper look at each type of sentence structure and how to form it.

Simple sentences are pretty simple: just a single independent clause, no more, no less. This includes subject and verbs, but can also include objects.

“Life itself is the most wonderful fairy tale.”—Hans Christian Anderson

“Be yourself; everyone else is already taken.”—Oscar Wilde

“Until the lion learns to write, every story will glorify the hunter.”—African proverb

“When a person can’t find a deep sense of meaning, they distract themselves with pleasure.”—Viktor Frankl

“It is during our darkest moments that we must focus to see the light.”—Aristotle

“Don’t aim for success if you want it; just do what you love and believe in, and it will come naturally.”—David Frost

Sentence structure can get pretty complicated, especially at first when learning the differences between clauses and conjunctions. To help you out, Grammarly gives you suggestions on how to transform whole sentences for clarity.